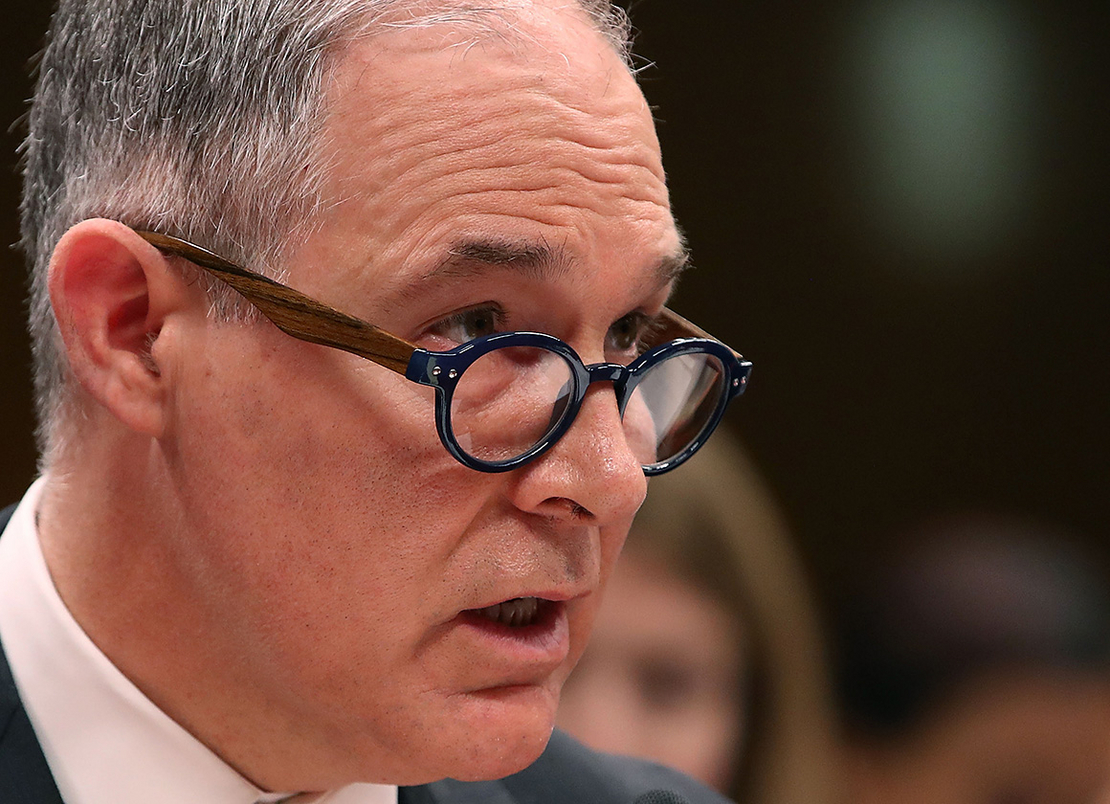 EPA dropped its Trump-era defense of a soundproof booth built for Scott Pruitt, its scandal-ridden former administrator, according to newly released letters.

EPA has acknowledged that the installation of the secure phone booth in the administrator’s office ran afoul of appropriations law, which a congressional watchdog office determined was the case more than four years ago. Letters recently obtained by E&E News show that the agency has reported the infraction — and that more violations were found tied to decorating Pruitt’s office.

EPA Administrator Michael Regan said in a Dec. 29, 2021, letter that the Government Accountability Office found that the agency had flouted a provision of appropriations law known as Section 710 when the agency failed to give advance notice to Congress when it spent more than $43,000 to install “a soundproof privacy booth” for the administrator’s office. Any agency funds spent in excess of $5,000 to furnish a political appointee’s office have to be disclosed in advance to lawmakers under the law.

“The EPA concurs that a violation occurred,” Regan said.

Overall, EPA spent $52,407.09 in violation of appropriations law, according to Regan’s letter.

In response, EPA has advised its budget officers of the legal requirements of the provision. The agency had no procedures in place to notify employees when the violations initially happened, according to the letter.

“Therefore, the violations cannot be fairly attributed to any individual,” Regan said. “Accordingly, the EPA has determined there was no knowing or willful intent to violate the Antideficiency Act, and no administrative discipline will be imposed.”

“In this instance, after the GAO issued its opinion, EPA engaged in its usual internal, legal deliberations concerning its response to that opinion,” Grantham said, adding those talks resulted in the December 2021 report.

The agency’s position switch on the phone booth came to light last week in an Office of Special Counsel letter sent to President Joe Biden. EPA previously had not reached the same conclusion as GAO on the soundproof room.

That letter collected whistleblowers’ disclosures about Pruitt’s mismanagement and heavy spending on travel and security at EPA, including on the phone booth. Records released along with the letter also detailed Pruitt pushing his security agents to drive recklessly and run the emergency lights and sirens so he could make appointments and pick up his dry cleaning (Greenwire, May 27).

Pruitt, facing a variety of ethics troubles, resigned from EPA in July 2018. He is now running for Senate in Oklahoma and has touted his time at the agency on the campaign trail (E&E Daily, May 3).

In a statement shared with E&E News by his campaign, Pruitt noted “there is ample testimony in the Congressional Record” regarding questions for this story and asked if his responses had been checked.

“If you had, you would have learned that I did not authorize nor participate in any aspect whatsoever in the approval and installing of a secure line at the administrator’s office. Moreover, I have stated that if I were involved, I would not have approved the installation,” Pruitt said, adding that the process was conducted by career staff at the agency.

Pruitt went on, “Any determinations made by the GAO or others would relate to decisions made by the agency, not me, whereas you personalize it in your question. Any implication or statement by you or anyone else that my personal actions were concluded to be violative of the law or unethical is categorically false and defamatory.”

Pruitt also cited Regan’s letter that said the violations cannot be attributed to any individual and EPA found there was no intent to violate the Antideficiency Act.

In April 2018, the Government Accountability Office determined that EPA had breached appropriations law by not giving Capitol Hill notice of its excess spending on the phone booth.

The agency had said in a letter that the booth was not meant to furnish Pruitt’s office but was needed so he could conduct official business. In another letter sent to lawmakers after the GAO ruling, EPA said it had not found a violation.

“EPA did not come to the same conclusion as GAO regarding whether the installation of a soundproof privacy booth falls within Section 710,” then-EPA Chief Financial Officer Holly Greaves told lawmakers in the letter, which included architectural plans, invoices and supply orders for the booth.

But unlike with lawmakers in that letter, EPA didn’t report an Antideficiency Act violation to GAO. That frustrated the watchdog office. It sent a letter in 2019 saying that EPA failed to report the transgression to GAO, which is required under law.

The Trump administration had sought to undercut that reporting requirement, saying in a memo that agencies should only file a report if they agreed a violation had occurred. Yet GAO pushed back in its own memo, saying it would report the infraction as well as an agency’s failure to report it.

Regan’s letters have now fulfilled this obligation, which had been left unresolved since the last administration. Among those receiving a report from EPA was Comptroller General Gene Dodaro, head of GAO.

EPA has been reluctant to divulge information about the phone booth in the past.

In 2017, E&E News filed a Freedom of Information Act request for images of the facility. It took nearly three years, and a successful appeal, for the agency to release a photo of the booth (Greenwire, Aug. 31, 2020).

Grantham with EPA said there are no plans to remove the phone booth, noting Regan’s letter brought the agency into compliance with the law.

“Therefore, at this point it is a better use of taxpayer funds to allow the phone booth to remain in place,” Grantham said.

‘We have an anti-deficiency act violation’

EPA could have reported the offense to GAO years ago, according to records released to E&E News last week under a separate FOIA request.

Agency officials were discussing how to respond to the congressional watchdog soon after its finding against the phone booth. Emails show attorneys in the EPA’s Office of General Counsel shared information about the Antideficiency Act.

“If you have a moment, I’ve had a few conservations that might give you some useful background,” one lawyer told then-EPA General Counsel Matt Leopold in a message.

EPA had prepared a draft letter for Pruitt to send, explaining the agency’s position on the phone booth and fulfilling the requirement to report a violation.

“As explained below, EPA disagrees with GAO’s conclusion that an ADA violation occurred,” the letter said. Yet that letter was not signed by Pruitt.

Further, a memo lists several expenditures, including thousands of dollars spent on art loaned from the Smithsonian Institution; framed photos with the president and Cabinet officials; and a captain’s stand-up desk. Those items furnished the EPA administrator’s office and cost $8,283.66 altogether, over the $5,000 threshold.

“So even excluding the items covered by our legal theory and by the maintenance theory, we have an anti-deficiency act violation,” the memo said.

It continued, “In order to report this violation we will need to do an investigation of why these were not reported.”

“The intimation, therefore, that EPA continued to take a different position than GAO had been a concern dating back to 2018, including to career officials at EPA,” Kevin Minoli, who was EPA’s top career lawyer at the time, told E&E News. “The option of an updated letter clarifying that EPA was not disagreeing with GAO and reporting the additional expenditures included in EPA’s recent report was put before political leadership at that time, but not accepted.”

Minoli, who is now a partner at the law firm Alston & Bird LLP, signed off on EPA’s initial response to GAO. But he said it wasn’t surprising EPA has issued an updated letter.

“While GAO invites an agency to weigh in before reaching a conclusion, when GAO subsequently issues a formal interpretation, it is understood to be speaking on behalf of the entire U.S. government,” Minoli said.

Other EPA offices were keeping track of the phone booth, as well.

Greaves in the finance office received an email about Antideficiency Act disclosures for the forthcoming agency financial report, including a “potential” one about “the April 2018 GAO report on the soundproof room.”

An attachment had more, saying EPA was “investigating the issues raised” by GAO’s ruling on the phone booth.

Then not much happened for years. In 2020, EPA recounted the episode in detail in a letter to the Office of Special Counsel but didn’t share any conclusions from an investigation of spending on the booth.

But by the following year, with a new administration in charge of the agency, EPA’s position began to change.

“EPA is coordinating with OMB on reporting an Antideficiency Act violation related to the installation of the soundproof privacy booth,” the agency said in a subsequent letter to the special counsel.

Designed to keep sensitive calls inaudible to the outside world, the phone booth, built in a former storage closet in the administrator’s office, stands about 7 ½ feet tall, more than 4 feet wide and 3 ½ feet deep. Yet despite tens of thousands of dollars spent, as well as lawmakers’ questions and FOIA requests to uncover its secrets, the booth has gotten little use.

The Washington Post reported that Pruitt only used it once, citing records obtained by the Sierra Club.

Andrew Wheeler, who followed Pruitt as EPA administrator, told E&E News and later The New York Times that he hadn’t used or needed to use the booth (E&E News PM, June 13, 2018).

And soon after his confirmation last year, Regan told the newspaper he hadn’t used the booth, either.

“I don’t even know where it is or what it looks like. I guess the first thing I should do is take a look at it,” Regan said. “I’ve been using the phone on my desk.”

Grantham, the EPA spokesperson, said Regan has not used the phone booth.