In reversal, parks will remain open if there’s a shutdown 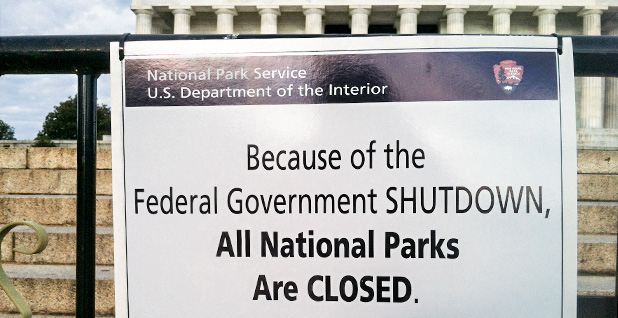 In a reversal from 2013, national parks will remain open even if Congress allows the federal government to partially shut down this weekend, the Interior Department said today.

The closure of parks sparked great public anger during previous shutdowns, with congressional Republicans taking a greater share of the criticism, despite a Democrat being in the White House.

"We fully expect the government to remain open, however in the event of a shutdown, national parks and other public lands will remain as accessible as possible while still following all applicable laws and procedures," Heather Swift, the department’s spokeswoman, said in an email. "The American public and especially our veterans who come to our nation’s capital should find war memorials and open air parks open to the public."

Swift said the department’s plan is to allow public access "wherever possible," but she added that some services would be affected.

In addition, Swift said, "culturally-sensitive areas" or backcountry areas that pose a risk to visitors could have restricted access under a shutdown.

It’s a departure from the last 16-day partial shutdown in October of 2013, when the Obama administration closed the parks and put up barricades on the National Mall, including the World War II and Vietnam Veterans memorials.

Many war veterans visiting Washington, D.C., ignored those barricades, but the issue caused a stir on Capitol Hill. It prompted a joint hearing of the House Natural Resources Committee and Oversight and Government Reform Committee, with Republicans accusing the Obama administration of allowing the closures as a way to make a political statement.

White House budget director Mick Mulvaney told Fox Business in an interview yesterday that a government shutdown "would look very different under a Republican administration than it would under a Democrat." He cited the National Mall monuments as an example, and said they would be open to visitors.

The government could run out of money as soon as Saturday if Congress doesn’t cut a deal to keep it funded by tomorrow.

Immigration policy is a key sticking point in the talks, with President Trump insisting on funding for a wall on the Mexican border and Democrats demanding legal protections for 800,000 people who could be deported if Congress doesn’t extend the Deferred Action for Childhood Arrivals program, known as DACA.

Under the Interior Department’s plan, park services that could be open during a shutdown include free-standing gift shops, lodges, restaurants or gas stations that do not require assistance from park officials to operate.

Services that would not be open include gifts shops inside visitor centers because park rangers would not be available to unlock them. If it snowed, a gas station on a road inside a park might not be open, since no plows would be operating.

The department said some parks might choose to restrict access in areas where there’s a high risk of an avalanche or in locations that are common spots for injuries, since there would be no patrols on duty.

Swift said the department is putting a priority on "the most accessible and most iconic areas of parks and public lands," but she said each park, monument and recreation area would have different plans in place.

"Lastly, this is not just national parks," Swift said. "The department owns one-fifth of the land in the United States, much of it BLM land in states like Nevada, which is 82 percent owned by the Interior Department. So access to roads on public lands is a very big deal for rural residents west of the Rockies."