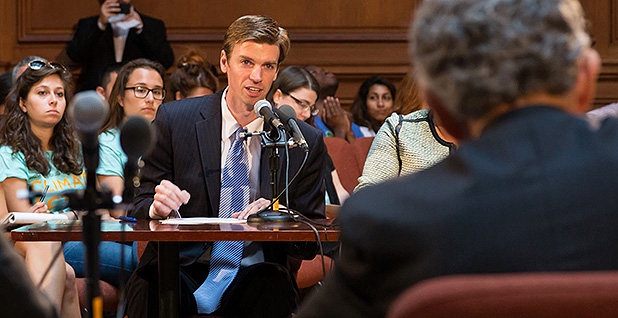 When Democrats on the Senate Environment and Public Works Committee rallied in January against the nomination of then-Oklahoma Attorney General Scott Pruitt to be U.S. EPA administrator, National Wildlife Federation President Collin O’Mara was on hand to explain why his group was opposing an executive branch nominee for the first time in its 80-year history.

In contrast, O’Mara joined the leaders of other sportsmen’s groups at the Interior Department for a March ceremony in which Secretary Ryan Zinke reversed a number of Obama-era policies. NWF backed Zinke’s nomination and stood by him even though the group had supported some of those rescinded policies (Greenwire, March 24).

The two events reflect the dual roles O’Mara, 38, plays in steering the organization through the Trump presidency.

Over coffee last month, O’Mara said he considers himself part of a "rearguard action" trying to maintain basic clean air and water protections that are key to his 6 million members, while also building alliances with other like-minded interests to advance conservation of public lands and wildlife.

NWF’s approach stands in contrast to groups that appear more focused on resisting the new administration. On the campaign trail, President Trump talked more about sportsmen’s issues than any other presidential candidate in years, O’Mara said, creating an opening for the group and its allies. The president’s son Donald Trump Jr. has been vocal in his support for public lands.

"I don’t think the president would have won if it wasn’t for sportsmen. I think it’s an opportunity," said O’Mara. "The question is how do we make sure that those promises are fulfilled and there’s as much attention given to some of these issues as there are to some of the industry issues?"

O’Mara, who led the Delaware Department of Natural Resources and Environmental Control under Gov. Jack Markell (D) from 2009 until he was tapped as head of NWF in 2014, has spent the early days of the new administration pressing lawmakers to support funding for environmental and conservation programs slated for cuts in the White House’s skinny budget.

He felt vindicated by the outcome of fiscal 2017 spending talks, during which lawmakers not only largely rejected deep cuts sought by the White House, but also restored funds for the Great Lakes and provided a small increase for some wildlife conservation programs at Interior.

"We saw broad bipartisan support for a lot of the big proactive collaborative programs," O’Mara said during a follow-up phone call last week.

Enduring support by members of both parties for long-standing conservation issues — including forestry, the Land and Water Conservation Fund, and the dealings with the national park maintenance backlog — bodes well for fiscal 2018 appropriations, he said.

In meetings with lawmakers and the administration, O’Mara said he’s emphasized the importance of investing in conservation, which he says has potential to head off the divisive regulatory fights that often turn partisan.

"I just think that a lot of the crises that we’re going to face over the next few years are going to be directly impacted by the lack of investment we’ve made," he said, ticking off wildfire funding and species habitat as examples.

"One of the cases I’m making right now on the Hill is that by investing in proactive conservation at the state level, it reduces the need for regulation, it creates more economic certainty for businesses," said O’Mara.

"But you can save thousands of species in the next few years and do it in a way that avoids litigation. And that also defuses the ever-growing frustration with the number of riders and things we’re seeing on the Endangered Species Act."

During an appearance before the Environment and Public Works Committee last month, O’Mara expressed support for President Obama’s Clean Water Act jurisdiction rule and noted that several Republican senators talked up the importance of state-federal collaboration.

"This theme is kind of emerging as a way to kind of get better conservation on the ground and better outcome," he said.

"The idea of working in collaborative partnerships I think always works better than heavy-handed government coming in areas and impacting landowners and use of resources," he said last month.

Barrasso’s counterpart atop EPW, Sen. Tom Carper (D-Del.), said that as head of his state’s Department of Natural Resources and Environmental Control, O’Mara embraced what he called "the Delaware way."

"We focus on trying to communicate, look for principled compromises and to collaborate, in order to get things done, build consensus," Carper said last week. "That’s part of our DNA: practical, pragmatic, willing to compromise on process, even policy, but not on principles. And I think that defines Collin, as well."

‘Hell of a conservation package’

O’Mara is trying to capitalize on bipartisan support for collaboration to push another top legislative priority: seeing that conservation receives a chunk of funding in the infrastructure package that Trump has said should be worth at least $1 trillion.

"What we’re trying to figure out is are there ways to kind of show how these individual bipartisan efforts could be part of a bigger conservation package?" he said. "It’s not the regulatory components, but it’s the proactive collaborative work that has universal support."

If an infrastructure bill materializes, "we just want to make sure there’s investment in it" for conservation issues, including forestry, the maintenance backlog and "proactive" wildlife policies.

Addressing these issues "put a ton of people to work in rural communities — areas that are the most left behind right now," O’Mara said.

In February, NWF signed onto a letter by a sportsmen’s coalition known as the American Wildlife Conservation Partners that urged 5 percent of the infrastructure push to "natural infrastructure and conservation investments that will grow America’s outdoor economy."

O’Mara said the message has been "received well" at the White House, although the key questions of how the broader package will be paid for and how it fits into other major legislative initiatives remain unanswered.

The package could mirror issues that were under negotiation last year between House and Senate conferees trying to reconcile competing energy bills, including wildfire funds, parks and LWCF.

"That’s a hell of a conservation package that pretty much helps every district in the entire country," O’Mara said, noting the items would "generate a ton of votes, and it also helps in the very places that helped elect the president."