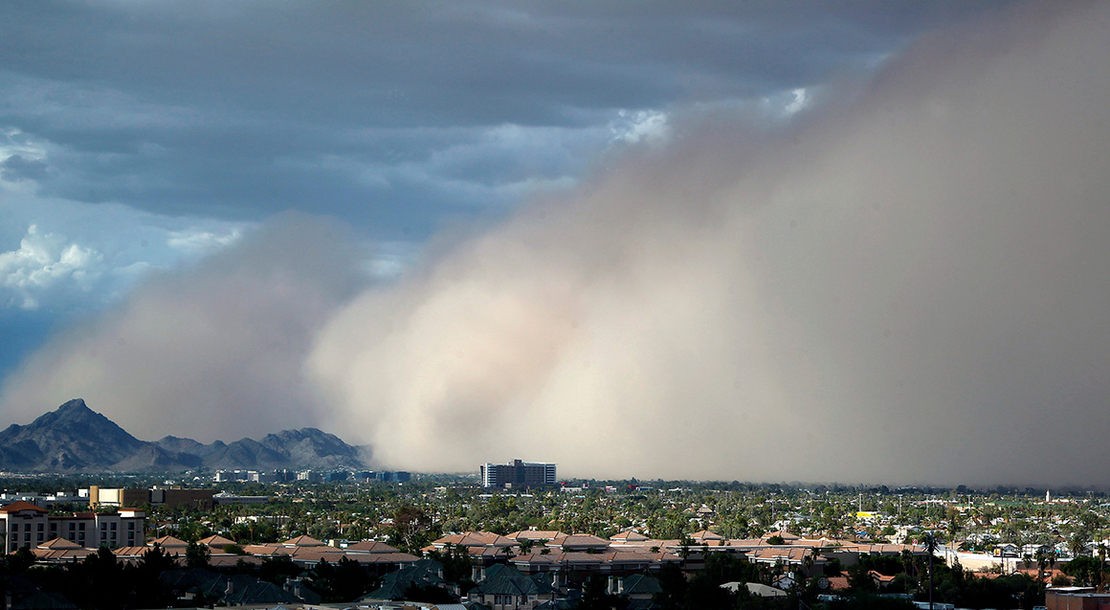 A large dust storm, or haboob, sweeps across downtown Phoenix in 2012. Some groups claim that the storms are responsible air pollution problems in Yuma County. AP Photo/Ross D. Franklin, File

Nonetheless, EPA this week took the rare step of formally confirming that air quality trends in one of the state’s agricultural districts have gone backward. In a final rule published yesterday, the agency scrapped its 2006 finding that the Yuma County area, a prime vegetable-growing patch, was meeting a Reagan-era dust standard. As a result, state regulators must now come up with a new plan for bringing human-caused sources under control.

The episode serves as a reminder that widely touted progress toward cleaner air is not inevitable. The rule’s publication came two weeks after EPA also signaled plans to flunk part of Canton, Ohio, for compliance with the agency’s current standard for airborne lead.

While that latter area has long been in attainment, emissions from a Republic Steel plant have pushed average concentrations of the toxic heavy metal to almost three times the legal limit of 0.15 micrograms per cubic meter of air, Debra Shore, head of EPA’s Midwestern regional office, indicated in a letter last month to Ohio Gov. Mike DeWine (R).

“We look forward to a continued dialogue with you and your staff as we work together to implement” the standard, Shore said.

At Republic, a subsidiary of Mexico-based Grupo Simec, representatives did not reply to phone and email requests for comment. In an email, DeWine spokesperson Dan Tierney said yesterday that the state has already acted to curb lead emissions and anticipates that the Canton area “will soon return to compliance.”

Both lead and the type of particulate matter commonly labeled dust are among the pollutants covered by National Ambient Air Quality Standards that EPA must periodically reassess to ensure that they protect public health and the environment based on the latest research into their effects.

Any time a particular standard is tightened, it’s routine for agency regulators to initially find that various parts of the country are in nonattainment. Far more unusual, environmental lawyers say, is a downgrade of an area previously deemed in compliance with Clean Air Act requirements.

Historically, the agency has been reluctant to take that step, Earthjustice senior attorney Seth Johnson said in an interview, noting an Obama-era rejection of his organization’s petition to redesignate dozens of areas that were violating a smog standard. Asked how he read the decisions announced this month, Johnson said, “I hope this means the agency is taking more seriously the statute and the need to protect communities.”

Robert Ukeiley, a senior attorney at the Center for Biological Diversity, sounded a similar note but added that it’s hard to tell whether those decisions are signs of “a systemic shift” by EPA. As of publication time this afternoon, an EPA press aide had not substantively responded to a request for comment placed yesterday.

But the pushback that followed the initial decision to downgrade the compliance status of the Yuma County area suggests why regulators may be slow to act. Under the Clean Air Act, dust is formally known as PM10 because it encompasses particulate matter no larger than 10 microns in diameter. Those particles are tied to a variety of cardiovascular and respiratory problems. The 1987 annual standard is 50 micrograms per cubic meter of air; the daily benchmark is 150 micrograms.

Since 2006, the 456-square-mile parcel had operated under what’s called a “clean data determination,” a kind of regulatory halfway house in which EPA informally deemed the area in compliance with the standards even though it formally remained listed in nonattainment. But while Arizona officials meanwhile didn’t have to take further steps to lower dust levels, air monitoring showed continued violations of the daily limit, according to the EPA proposal last June to rescind the clean data determination.

But the draft rule drew heated objections from farm organizations, who blamed the violations on Sonora Desert dust storms.

“As vegetable farmers, our business demands that we produce clean, nutritious products. We must control dust and we do,” Mike Pasquinelli, president of the Yuma Fresh Vegetable Association, wrote in comments last year included in the rulemaking docket. But, he added, “we oppose additional regulatory measures that are based on speculation rather than science.”

Instead, EPA should exempt the violations under its “exceptional events” policy, which effectively allows for waivers for problems outside of regulators’ direct control, he wrote. It was a call echoed by Arizona’s two Democratic senators, Kyrsten Sinema and Mark Kelly. Without an exceptional events exemption “for high wind events, the area will continue to exceed the standard due to issues out their control,” the two wrote in a letter last fall to EPA Administrator Michael Regan.

In a reply on Regan’s behalf, acting agency air chief Joe Goffman encouraged Arizona officials to explore that approach but added that “the state must show that the windblown dust is entirely from natural undisturbed lands in the area or that all anthropogenic sources are reasonably controlled.”

But in the final rule published yesterday. EPA cited previously identified “deficiencies” on paved road controls as evidence that more could be done and gave the Arizona Department of Environmental Quality 18 months to come up with a revised cleanup plan. At the state agency’s urging, however, EPA pushed back the deadline for then bringing the Yuma area into attainment from 2025 to 2027. Spokespersons for Kelly and Sinema did not reply to phone and email messages yesterday seeking comment.

At the Arizona Center for Law in the Public Interest, which has been involved in litigation over other air quality issues in the state, staff attorney Jennifer Anderson called it “unconscionable” for EPA to have taken so long to scrap the clean data determination, given that the Yuma area had been registering dust standard violations since 2006, the year the determination was put in place.

Now, Yuma residents have to wait 18 months for the state to devise the new cleanup plan, Anderson said in an email. “They certainly deserve a lot better. “