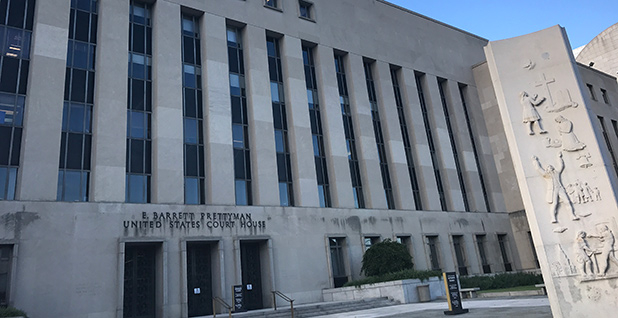 The U.S. Court of Appeals for the District of Columbia Circuit vacated a significant portion of an Obama-era rule guiding implementation of the 2008 ozone standard. Ellen M. Gilmer/E&E News

A federal court today sided with environmentalists in vacating a significant chunk of an Obama-era rule guiding implementation for the 2008 ozone standard.

The U.S. Court of Appeals for the District of Columbia Circuit found that U.S. EPA unlawfully weakened protections when it decided to revoke the 1997 standard as part of the implementation rule.

Senior Judge David Sentelle, a Reagan appointee who wrote the opinion for the unanimous three-judge panel, found that several parts of EPA’s rule were "inconsistent with the clear text" of the Clean Air Act.

The decision also likely will affect the Trump administration’s efforts to put in place an implementation rule for the 2015 ozone standard, which the Obama administration lowered even further than the 2008 Bush-era level. EPA proposed a rule in 2016 that was partly based on the rule that the court today tore apart.

"This is really good news for people in cities throughout the United States," said Seth Johnson, an attorney at Earthjustice who argued the case for greens. "The court unanimously rejected a whole slew of attempts to weaken important protections against smog."

Ground-level ozone is a key component of smog that’s formed when nitrogen oxides react with volatile organic compounds in sunlight. In 2008, during the George W. Bush administration, EPA set the national ambient air quality standards (NAAQS) for ozone at 75 parts per billion.

EPA issued a final rule in 2015 laying out guidelines for states on how to improve air quality in areas that exceed that limit.

Along with setting due dates for state pollution reduction plans and establishing control technologies, EPA eliminated the old 1997 standard of 84 ppb for regulatory purposes. The agency said the standard had become largely superfluous because "it is mathematically impossible to attain the 2008 ozone NAAQS without first attaining the 1997 ozone NAAQS."

Led by the Sierra Club, greens challenged a number of aspects of the rule stemming from the revocation of the 1997 standard. They argued that EPA illegally delayed deadlines for areas with bad air pollution to put in place controls and allowed them to avoid "bump-ups" to levels of ozone pollution that come with more stringent regulatory requirements.

The panel of three judges of the D.C. Circuit — which also included Chief Judge Merrick Garland and Judge Judith Rogers, both Clinton appointees — heard nearly an hour and a half of oral arguments in September (E&E News PM, Sept. 14, 2017).

In today’s opinion, the court agreed with greens that the agency had unlawfully allowed areas that still hadn’t met the 1997 standard to avoid deadlines associated with that standard.

He also wrote that EPA "failed to introduce adequate anti-backsliding provisions" to ensure that the air pollution in nonattainment areas under the 1997 standard doesn’t get worse. Under the Clean Air Act, those measures have to be "not less stringent" than the controls that were in place before the standard was revoked.

Much of today’s opinion revolved around "orphan areas," a term greens have used to describe areas at risk under the rule.

Those include "orphan nonattainment areas," which comply with the more stringent 2008 standard of 75 ppb but are still designated in nonattainment with the 1997 level of 84 ppb.

Sentelle wrote that, although it is true that the orphan areas are in compliance with the newer standard, they never went through the formal redesignation process under the old standard. EPA, therefore, was required to keep controls in place to prevent backsliding.

Johnson of Earthjustice said the decision will affect big cities — including Boston, Detroit and Milwaukee — that had fallen into those so-called orphan areas.

The court also vacated what EPA had termed the "redesignation substitute," a process by which areas could be redesignated into less stringent pollution levels under the 1997 standard.

"This had the effect of greatly narrowing the set of sources that are subject to New Source Review protection," Johnson said.

Sentelle also sided with greens in vacating EPA’s decision to allow states to choose an alternative baseline against which to measure reasonable progress in achieving the 2008 standard.

The court, though, sided with EPA in a few areas where the Clean Air Act was ambiguous and the agency’s interpretation was "reasonable."

That included upholding EPA’s choice of 2011 as the baseline year for reasonable progress and its treatment of areas designated in nonattainment under both the 1997 and 2008 standard.

The court devoted two pages of the 31-page opinion to South Coast’s petition for review, which had argued that changes in the rule made it harder for areas like the Coachella Valley — where air pollution drifts in from upwind areas — to show progress in achieving the standard.

South Coast had argued it would be "absurd" for reductions to only come from within the boundaries of the nonattainment area.

"Grammar and context" won out, according to today’s opinion.

Sentelle wrote that the Clean Air Act was clear in requiring that emissions reductions come from "in the area." And he wrote that South Coast’s absurdity argument failed to take into account a number of alternatives in the Clean Air Act for nonattainment areas to show reasonable progress, including putting in place controls on a broader range of pollution sources.

In 2015, the Obama administration lowered the ozone standard once again, to 70 ppb.

The Trump administration has yet to finalize a 2016 proposal for putting in place that lower limit.

That proposal is modeled on its counterpart of the 2008 standard but lays out two options for revocation of that earlier benchmark.

One, similar to the approach struck down today by the D.C. Circuit, would revoke the 2008 standard in all areas one year after the effective date of the attainment designations for the 2015 benchmark, with anti-backsliding requirements put in place for all areas that still don’t meet the 2008 standards at that point.

The other would leave the 2008 standard in place in all areas designated as being in nonattainment for that threshold until they are reclassified as in attainment.

While the Trump administration has taken no action to finalize the draft implementation rule for the 2015 standard, an EPA spokeswoman indicated earlier this week that the agency could be moving forward with it after dropping a separate "supplemental" proposal related to classification of nonattainment areas (E&E News PM, Feb. 14).

Johnson of Earthjustice said today’s court decision "is helpful in clarifying what the agency’s options are not."

EPA officials are reviewing the opinion, a spokesman said in an email this morning.