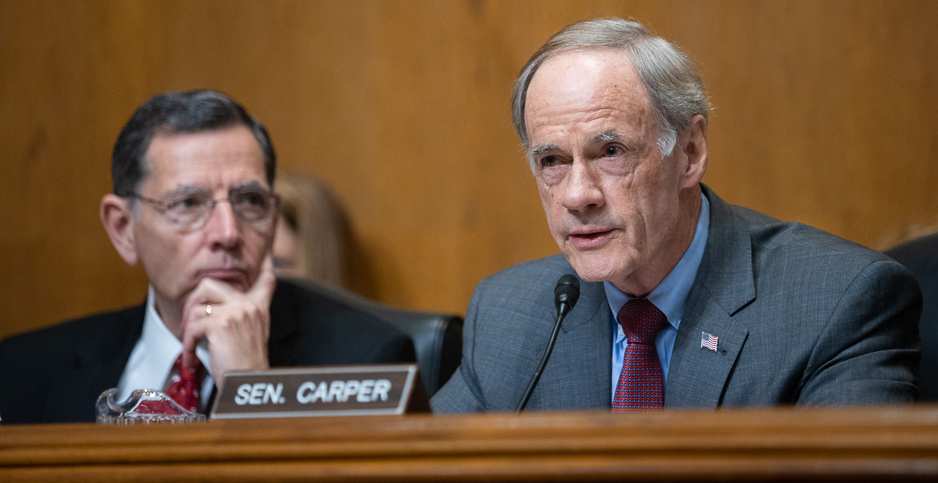 "Mr. Wheeler has just hired a new chief of staff whose tweets proclaim that she believes that the so-called looney left wants to, quote, ‘implement a Soviet-styled takeover of our energy and our economy’ and that, quote, ‘Democrat actions are corroding democracy,’" Delaware Sen. Tom Carper said at an Environment and Public Works Committee confirmation hearing today for three other nominees.

"I served five years and three tours during a hot war in Southeast Asia to oppose the expansion of communism," Carper said. "These comments conflating climate action with communism aren’t just intellectually dishonest. They are reprehensible, especially when you consider the military service record of our commander in chief during that same war."

Meanwhile, Sen. Sheldon Whitehouse (D-R.I.) raised questions about whether EPA’s ethics process could prevent Gunasekara from doing favors for the undisclosed people and companies that have bankrolled the Energy 45 Fund she leads and the Texas Public Policy Foundation and CO2 Coalition, fossil fuel-friendly groups with which she’s affiliated.

"Every employee at the EPA has an obligation of impartiality. And it means that if you are making decisions that relate to people or interests or companies with whom you have a relationship, that relationship needs to be disclosed, and you need to take appropriate steps to make sure there’s no conflict of interest," Whitehouse said to Doug Benevento, Trump’s pick for deputy EPA administrator.

"How are you possibly gonna know that she is in compliance with that rule if you don’t know who was funding her through this period?" he asked.

But that didn’t satisfy Whitehouse, a critic of recent Supreme Court and Federal Election Commission decisions that have overturned some restrictions on money in politics and disclosure requirements.

"Well, here’s the problem: You haven’t updated your ethics rules. You don’t even ask about dark money conflicts of interest; you’re still using ethics rules that predate the explosion of dark money that has corrupted our politics," he said. "When you say go to the ethics people, you’re going into a fixed game, because they don’t ask that question, either."

Whitehouse then pressed Benevento again on how he could ensure that Gunasekara doesn’t violate impartiality standards. The deputy nominee once more put that responsibility on ethics officials.

Gunasekara didn’t immediately respond to requests for comment on the senators’ concerns. But EPA spokesperson Molly Block said in a statement, "All EPA appointees work closely with our career ethics officials and work diligently to ensure they follow all ethics guidelines and laws."