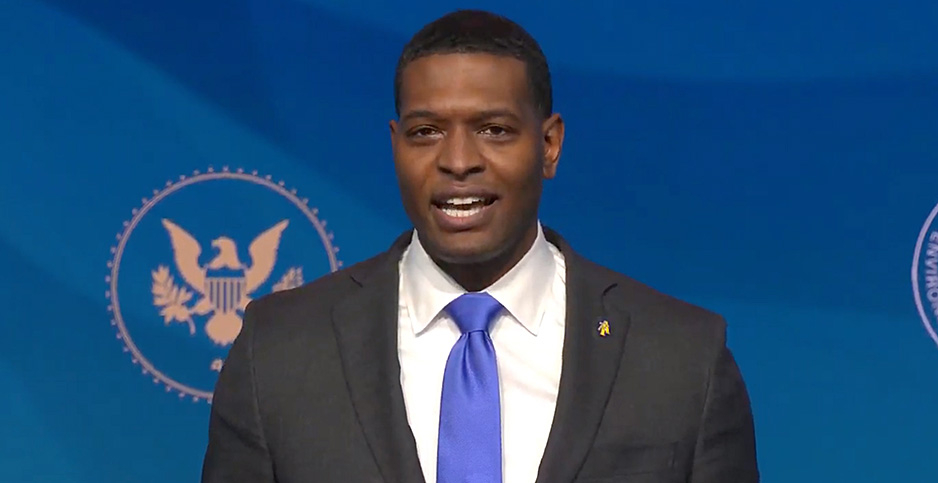 Michael Regan, the nominee for EPA administrator, spoke at an event Saturday with President-elect Joe Biden and other members of the administration's climate team. Biden Transition Tv Via Cnp/ZUMAPRESS/Newscom

Michael Regan on Saturday gave his first speech as the presumptive head of EPA, and his brief remarks were transformative — both for the 44-year-old Black man who grew up in the shadow of the 1950s-era H.F. Lee power plant in North Carolina, and for the battered federal agency he is poised to inherit.

"Growing up as a child, hunting and fishing with my father and grandfather in eastern North Carolina, I developed a deep love and respect for the outdoors and our natural resources, but I also experienced respiratory issues that required me to use an inhaler on days when pollutants and allergens were especially bad," said Regan during his introduction by President-elect Joe Biden in Wilmington, Del.

There’s little question where the lung-searing pollution came from. The 382-megawatt H.F. Lee Plant was one of Duke Energy Corp.’s baseload coal burners. It spewed millions of tons of carbon dioxide and other criteria air pollutants every year since its opening in 1951.

What Regan didn’t yet know was how H.F. Lee would inform his budding career in environmental science.

"I’ve always been curious about the connections between our environment and our health, how the world around us contributes to or detracts from our enjoyment of life," he said. "So after completing my education in environmental science, there was one place in particular that I wanted to work, the EPA."

He made it three times over — first as a summer intern at the nearly 14,000-employee agency, then as national program manager for the Office of Air Quality Planning and Standards, and now as Biden’s pick for the agency’s administrator. He will be joined on the senior climate team by one of his predecessors, Gina McCarthy, who led the agency under President Obama.

Regan, one of six members of the Biden-Harris climate leadership team introduced Saturday, looks to join the incoming administration after four years at the North Carolina Department of Environmental Quality, where he worked to shrink the state’s sizable carbon footprint while transitioning its energy and transportation sectors toward carbon-free fuels.

Biden called Regan "a proud son of North Carolina" and praised him for his commitment to addressing pollution concerns not just with regulated industrial and business sectors, but also with "fence-line communities" most affected by pollution from industrial plants, highways and other emissions sources. Such communities have "carried the burdens of industrial progress for much too long without sharing in any of the benefits," Biden said.

Regan said he will act quickly to address those environmental inequities.

"We will move with a sense of urgency on climate change, protecting our drinking water, and enact an environmental justice framework that empowers people in all communities," he said. "And as a state official, I understand how actions from EPA can help or hurt local efforts. We’re going to ensure that EPA is once again a strong partner for the states, not a roadblock."

The promises are backed by more than environmental science, a field in which Reagan is well versed. (He holds degrees from North Carolina A&T State and George Washington universities.)

They are also based on personal experience in North Carolina, which has seen a disproportionate number of climate disasters during his tenure at DEQ in Raleigh.

Among them was 2018’s Hurricane Florence, widely considered the worst natural disaster in North Carolina history. Florence’s destruction, including to Regan’s hometown of Goldsboro, population 35,000, caused more than $24 billion in damage statewide. Florence was preceded by Matthew, another catastrophic storm, in 2016, and was followed by Hurricanes Dorian in 2019 and Isaias this year.

Regan also oversaw the implementation of Democratic Gov. Roy Cooper’s sweeping environmental Executive Order 80. The 2018 document called for a top-to-bottom overhaul of the state’s climate policies, including programs to transition to a clean energy economy and prepare the state for future climate disasters.

The nearly 400-page plan was rolled out last June, one month before another storm, Category 1 Hurricane Isaias, landed on the state’s coast. Regan, who chaired the state’s Climate Change Interagency Council, was prescient in his comments about storms and the need for climate resilience.

"Michael is somebody who starts with the science, and he knows how frequent and intense these storms are going to become under a changing climate," said Will McDow, director of landscape resilience at the Environmental Defense Fund’s North Carolina office.

Regan "also comes from eastern North Carolina, so he knows what storms do to these rural communities, whether it’s farmers, small landowners or business owners," added McDow, who has known Regan for more than a decade. "He also knows about communities in the floodplain that are disproportionately impacted" by floods.

A spokesperson at the North Carolina DEQ declined to comment on Regan’s record on climate change and environmental disasters, referring questions to the Biden-Harris transition team.

In a 2019 newspaper op-ed, Regan challenged North Carolinians to respond to the "disruption" caused by global changes, whether to the environment via climate change or the economy through technological innovation. He called such disruptions "our new normal" and challenged readers to persevere through climate disasters.

"We cannot continue to ignore the reality that we will face more frequent and extreme weather. We must rebuild stronger, smarter and faster," he said.

"As we begin another hurricane season with even greater challenges facing North Carolina this year, the administration’s leadership has better positioned our state to prepare our most vulnerable communities," he said at the time.