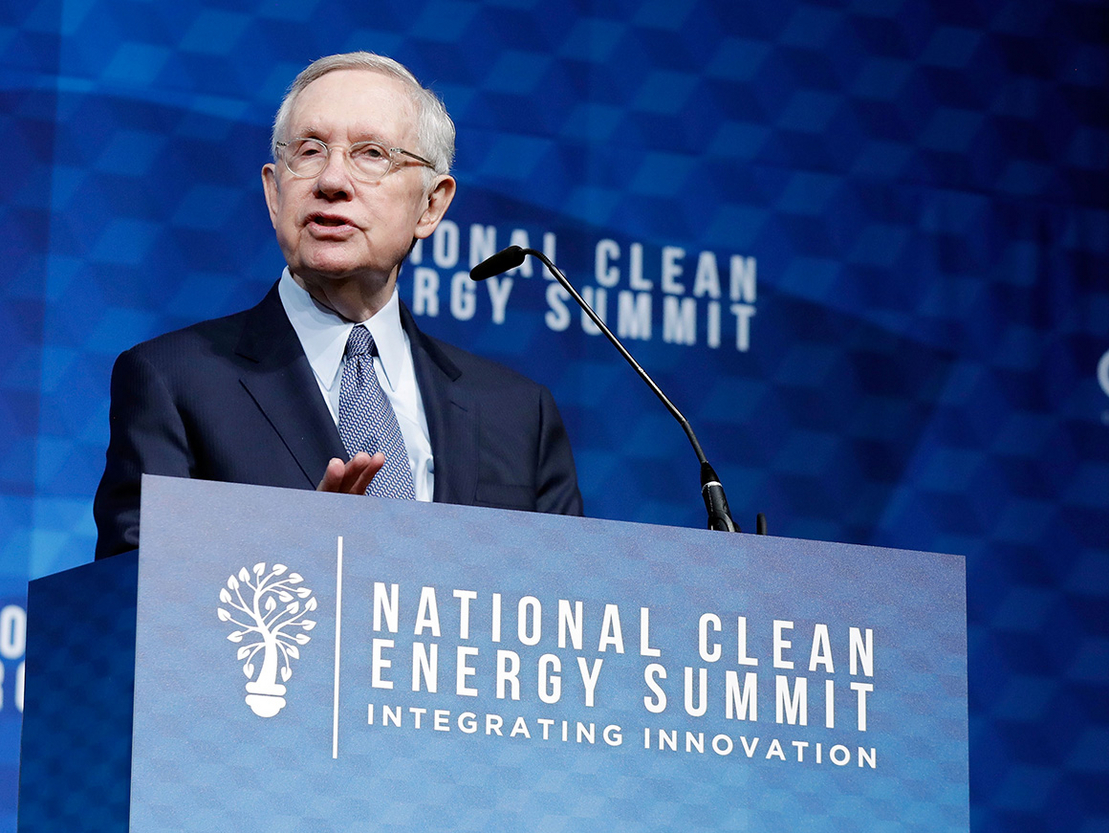 Nevada Democrat Harry Reid, one of the most consequential Senate leaders in modern U.S. history, died last week, leaving behind a lasting legacy on energy and environmental policy.

Reid died at home in Henderson, Nev., following complications with pancreatic cancer. He was 82.

President Biden, in a lengthy statement, noted Reid’s leading role in creating the Great Basin National Park. Reid authored legislation for the park while a member of the House during the 1980s.

"Under his watch as Senate Majority Leader, Harry helped pass the Recovery Act to prevent another Great Depression," said Biden, referring to the 2009 stimulus bill that passed in the wake of the financial meltdown. "He helped rescue the American auto industry. He helped pass the Affordable Care Act and Dodd-Frank Wall Street Reform, ended Don’t Ask Don’t Tell, and ratified the New Start Treaty."

The League of Conservation Voters, which gave Reid a lifetime achievement award in 2015, released a statement pointing to the senator’s "incredible legacy" on energy and environment issues.

"We are so grateful that he brought the fight time and again throughout his long and distinguished career to climate solutions, clean energy, and protecting public lands in his beloved Nevada and across the country," said LCV President Gene Karpinski.

Reid was a foe of the coal industry but also supported natural gas as a cleaner energy source. He backed legislation to promote gas-powered cars, which would put him at odds with the current green drive toward electrification.

Reid kept nuclear waste from being stored in Nevada’s Yucca Mountain repository but was a supporter of his state’s mining industry. Environmental advocates often blamed him for killing mining law reform efforts.

Reid defended himself by saying, "I’m willing to consider any proposal for mining reform that protects the mining industry, doesn’t kill jobs and shares revenues with the state."

Reid is also known for launching a public fight in 2014 against Charles and David Koch, the Republican megadonors that helped fund libertarian causes, including opposing action to address climate change.

"I did things no one else would do," Reid told Nevada political writer Jon Ralston during a 2019 interview.

‘A place of my dreams’

Reid said his passion for environmental causes began with a trip to Piute Springs in California’s Mojave Desert about 40 miles to the south and west of his hometown of Searchlight, Nev.

"Oh it was a place of my dreams," Reid said. "For a young boy, it was beautiful. They had great big, tall cottonwood trees. Most of all, there was a fort there. It’s called Fort Piute. It was made out of rock, could have been built in 1864 to protect the mail routes. You could still see some of the windows where the gun emplacements were. There were ponds, and you had lily pads, cattails, I mean, unbelievable."

Reid added, "Searchlight itself had no trees, no grass, it was just a place where there was no water. I’d wanted to go back to Piute Spring because as a boy, my youthful mind, it was like paradise. And I went back. Somebody burned the trees, the big cottonwood trees, the fort had been knocked down. The lily pads were gone. The ponds were gone. I felt so bad about that. If we couldn’t protect that gem of the desert, then we’re in big trouble as a country."

"I wanted to do something about wilderness because Nevada was growing so fast," Reid recalled. "I knew people unintentionally would ruin the environment."

"I worked on wilderness, damaged my popularity in rural Nevada," he said. "Once in place, people were happy."

Reid said he got similar blowback to his work to resolve a lingering water war between his state and California. Reid said he brought warring parties together to craft a deal.

Reid, in the documentary, discussed his opposition to expanding the Reid Gardner Generating Station near Moapa, which provided nearly 40 percent of Las Vegas’ power.

"I made up my mind I was going to get rid of coal in Nevada," Reid said. "And what I did, I called a hedge fund. I told the guy, ‘Look, you back away from that coal plant or I will get even with you. I don’t know what I’m going to do, but I will figure something out.’"

Pressure from Reid, coupled with activism from the Sierra Club’s Beyond Coal campaign and other interests, helped secure the plant’s closure. It has since been demolished.

Reid also worked to promote renewables, including working to secure a buyer for energy from a solar plant being developed by the Moapa Band of Paiute Indians.

"So I call the mayor of [Los Angeles], and I said, ‘I know you’re trying to go to renewable energy. I can get you six, seven hundred megawatts within a period of time, a year. Can you use it?’ He said, ‘You bet,’" Reid recalled.

Reid said Bill Clinton’s election gave Yucca Mountain opponents an opening. He then worked with the Obama administration to kill the project. Not only that, he convinced President Obama to create the Basin and Range National Monument next to Yucca.

"It stops that land forever being spoiled," Reid said. "There’ll be no railroads going through that land. Right now, all the drilling equipment they had up there, it has now been ground up for junk steel. There’s nothing there. Now they would have to start all over again. We don’t have nuclear waste, and I don’t see it in the future."

Reid was born in Searchlight to a laundress mother and miner father, who committed suicide when Reid was 32.

Reid went to high school in Henderson, 40 miles away from Searchlight, where he played football and was an amateur boxer.

Reid studied history, economics and political science at Utah State University. He got a law degree from George Washington University in Washington and worked as a U.S. Capitol police officer to make ends meet.

Reid was Nevada lieutenant governor in the 1970s and chaired the state’s Gaming Commission between 1977 an 1981, where he worked to root out corruption.

He went after entertainment promoter Jack Gordon for trying to bribe him. In 1981, Reid’s wife, Landra, found a bomb attached to the family car.

Landra, a breast cancer survivor, was Reid’s high school girlfriend. They had four sons and a daughter.

Reid served in the House from 1983 to 1987, when he joined the Senate after running to replace Laxalt, who retired.

Reid is known for invoking the so-called nuclear option in 2013. He led a change of Senate rules to allow judicial nominees, except for the Supreme Court, to pass by simple majority.

Asked whether he regrets paving the road for Republicans to scrap the 60-vote majority for Supreme Court nominees too, Reid said he wasn’t surprised.

"It didn’t take a genius to understand that it would be used, but that’s OK," Reid told Ralston.

In 2015, Reid announced he would not run for reelection, following an exercising accident that left him blind in one eye.

After years of going to war with the Republican caucus and its leader, Mitch McConnell of Kentucky, Reid was calling it quits.

But he wanted to remain influential. Reid backed New York Sen. Chuck Schumer to lead the Senate Democratic caucus and remained a force in Nevada and national politics.

Reid has long been a kingmaker. Obama, who released a letter he wrote Reid, said he would not have been president without the senator’s encouragement. Reid also helped make sure an ally, Catherine Cortez Masto, would replace him in the Senate.

Doctors diagnosed Reid, who served in the Senate for three decades and as majority leader from 2007 to 2015, with pancreatic cancer in 2018.

During an interview with The New York Times in 2019, Reid said of his cancer diagnosis: "As soon as you discover you have something on your pancreas, you’re dead."

But Reid lived to see Democrats regain the White House and control of the Senate — even if by a razor-thin margin. And he lived to see the Capitol riot.

“Donald Trump will go down … as the worst president in the history of the country. And that says a lot because we’ve had some pretty bad ones,” Reid told The Salt Lake Tribune in one of his last interviews. “So good riddance.”

Reid’s funeral will be Saturday at the Smith Center for the Performing Arts in Las Vegas. Obama is expected to deliver the eulogy. Reid will lie in state in the Capitol Rotunda next week.

Said Schumer: “Harry Reid was one of the most amazing individuals I have ever met. He was tough-as-nails strong, but caring and compassionate, and always went out of his way quietly to help people who needed help. He was a boxer who came from humble origins, but he never forgot where he came from and used those boxing instincts to fearlessly fight those who were hurting the poor and the middle class.