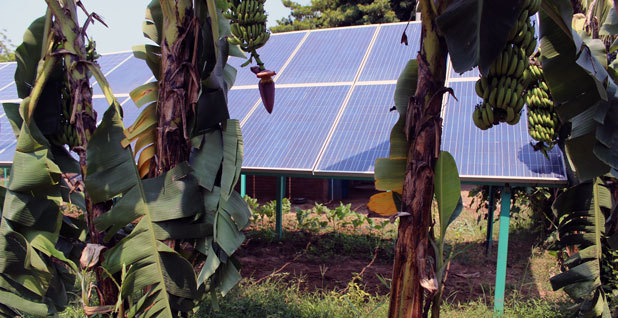 One way to beat a drought. New solar panels pump water to feed a banana plantation in Gujarat. Photo by Manon Verchot.

In the middle of Raman Bhai Parmar’s banana plantation, a solar power panel stands meters above the ground. The panel is connected to a pump, which pulls groundwater to his fields. Any excess power the farmer produces, he sells back to the grid.

Parmar is part of a pilot program run by the International Water Management Institute and the Sir Ratan Tata Trust in the Anand district of Gujarat, India. The organization paid him 7,500 rupees (about $120) for 1,500 kilowatt-hours of electricity produced.

In a country where energy demand is higher than energy production, the solar panel pump provides power stability for Parmar. Before, he depended on the grid to power his pump and often received less than eight hours of electricity a day. Pumping water for his crops has been especially important this year, after a weak monsoon.

"Now I can pump water all day, even if there is little rain," he said through a translator. "It feels good to have control over the water."

The project is one of many similar pilots across a country that is looking to rapidly expand solar in the coming years. Prime Minister Narendra Modi pledged to develop 100 gigawatts of solar power by 2022, five times the original target of 20 GW, as part of a plan to bring electricity to the 300 million people in the country living without power.

"India is a power-deficit country; whatever power gets produced will get consumed," said Jasmeet Khurana, senior manager at Bridge to India, a consulting firm based in India.

Parmar’s solar pump in Gujarat is a small piece of a very large mosaic that could transform the parts of India that are hardest to reach by more ambitious grid-related projects. It could provide efficient and more dependable electricity in more rural areas, explained Neha Durga, a consultant for IWMI-Tata, the organization running the pilot program. It could also be a cheaper alternative to gasoline-run water pumps once the initial investment in the solar panel is made. Durga thinks the government should focus more on small-scale solar projects like these than on large solar plants because almost a quarter of India’s energy consumption comes from the agricultural industry.

For the first time, India’s plans for solar power are operating on a grand scale. Through 100 GW of solar power, the government says it will abate 170 million metric tons of CO2 during its life cycle. Modi’s electricity development will also see an additional 75 GW of energy from wind and biomass. The renewable energy targets are part of India’s plan to reduce greenhouse gas emissions by 33 to 35 percent below 2005 levels by 2030, as pledged to the United Nations earlier this month in the country’s intended nationally determined contribution (INDC).

As part of its contribution, India plans to produce 40 percent of its energy from non-fossil-fuel sources but says it will need $2.5 trillion to achieve its goals.

"India has realized that solar power now makes economic sense and can not only play an important role in India’s energy security but also become an important investment into the future," said Khurana. "Setting ambitious INDCs provides a multi-decade growth driver for the solar sector and helps India position itself as a positive contributor in global climate discussions."

But reducing emissions and fully developing renewable energy capacity will be a challenge for India, experts say. Each of India’s 29 states has different laws regarding energy development, and the country’s fragmented land holdings can make developing large solar power plants challenging.

In a state like Rajasthan, which is covered in large part by the Thar Desert, there is a lot of room for major solar power projects, but more densely populated states like Maharashtra in west-central India do not have the same levels of land accessibility.

Though one solution would be to connect state grids so highly productive states like Rajasthan could sell power to other states, the country is years away from connecting the grids, said N.K. Gupta, technical manager of solar for the Rajasthan Renewable Energy Corp., a state government-owned agency.

Still, Gupta says the country is on track for meeting its solar development targets. "We have the privilege of having natural resources — sunny days, land, etc.," he said.

India’s solar development is also moving on a number of fronts. Of its 100-GW solar target, the country plans to achieve 60 GW from large- and medium-scale solar parks, and 40 GW from rooftop solar panels.

In cities like New Delhi, which has a population of more than 16 million people, rooftop solar panels could be a more effective strategy for energy production than connecting a solar park far from the capital. The government estimates that the city has the capacity for 2.5 GW of rooftop solar.

But even with this rapid development, India’s greenhouse gas emissions are expected to grow in the coming years. By 2020, India will double its coal consumption to attempt to meet energy demand.

"Coal is going to be the backbone of India’s energy future in terms of time issues and fast energy growth," Khurana said. "India plans to double its coal production and substantially increase its power purchasing." Despite the challenges, international investments in solar power roll in on a daily basis. In 2014, investments rose to $4 billion, up from $3.4 billion the year before.

And India is not the only country that will struggle with its renewable energy growth, Gupta said.

"The challenges [to developing renewable energy] are universal," he said. "We want to become part of this development journey."

With translation from Neel Kamal Pandey.