Industry, activists want change in how they talk 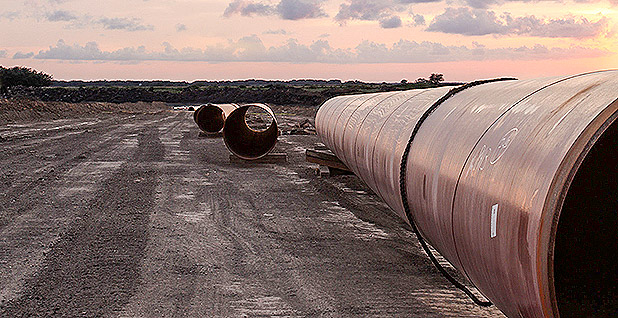 Several people involved with fighting oil and natural gas pipelines in their local area expressed frustration that the pipeline developers they work with brush off the concerns of those in the project’s charted path.

Leech said she first hoped to have the pipeline rerouted off their land and then, when it became clear that would not happen, to have it moved from the middle of a field to the field’s edge so it would not interfere in the farm’s operations.

"They told us where the location was going to be, and our input didn’t matter," she said.

"We don’t have a lot of open space, [and] what we preserve, it’s for a reason. It’s where our drinking water is, we pay for it with our taxes," Cronheim said of her state.

Jessica Wentz, a senior fellow with Columbia Law School’s Sabin Center for Climate Change Law, said she sees the communication gap between pipeline companies and affected communities as a symptom of the power imbalance between the two groups. "People have procedural rights but they don’t have any substantive rights" in pipeline project development, she said.

Chuck Lesniak, who recently retired from his role as environmental officer for the city of Austin, Texas, agreed. "The regulations give most of the power to the industry," he said. "When I’ve seen the process go well, it’s when the industry has stepped up significantly beyond what the regulation requires."

"Acknowledge and accept there are facts and perspectives that may be counter to your position, but are real and legitimate," he said. For example, pipeline accidents do have a very low probability of occurrence, but they also can have very high consequences. "It makes you seem obtuse if you don’t acknowledge both things are true," he said.

‘It needs to be routine’

Representatives from oil and gas industry groups said input like Lesniak’s serves as valuable feedback that they don’t often hear.

"Having these discussions when you’re away from a specific project is really important," said Mark Hereth, chairman of the Interstate Natural Gas Association of America Foundation.

"This conference is the one conference a year where I know I’m going to come and get a good perspective" from the stakeholder community, said David Murk, pipeline manager for the American Petroleum Institute.

Rick Kivela, manager of operational compliance for Enbridge Inc., said the pipeline industry historically hasn’t done enough to engage the public and explain what it does and why. "We need to do more to improve our pipeline safety performance, and we need to do a better job communicating to the public."

Murk suggested that pipeline companies may need training on what issues concern stakeholders. "We do polling, we do other things to understand what it is around pipeline safety that you don’t understand," he said, but he added that there is room for more work there.

Others grumbled that the industry stakeholders’ expressions of concern stand at odds with the feedback they frequently receive from people affected by pipeline projects, both directly through company officials and contractors and indirectly through pipeline opposition campaigns, that there are major, unaddressed problems in how the companies relate to communities.

Alan Mayberry, who as PHMSA’s associate administrator for pipeline safety is the agency’s top career official, said public involvement in projects leads to better outcomes. He noted feedback the agency has heard that "public awareness is telling people, but public engagement is asking people."

"Us being there just seemed to legitimize the process," Carl Weimer, PST’s executive director, said of the decision to pull out.

Without the trust’s involvement, the process has become "adrift," Weimer noted, as it is unclear whether the working group meets the standard-setting organization’s requirement for public-sector involvement without the group at the table.

‘Fear is not a good thing’

Andy Dinniman is a Democratic member of the Pennsylvania Senate who has engaged on pipeline issues after Sunoco Pipeline LP’s Mariner East 2 pipeline project caused sinkholes to appear in residential areas, among other problems (Energywire, March 8).

Dinniman said state leaders feel stuck. "What do we do? Do we make regulations, do we make statutes? … They’re there to promote energy, but what happens if that balance goes awry?"

In Dinniman’s view, the pipeline industry needs to move past basic pipeline awareness efforts to address the public’s substantive concerns. "The citizens understand the gas lines, they understand the prosperity that comes from it, but you have to find the right way to assure them that they are safe," he said.