Industry group wants to pull out of kids’ climate case 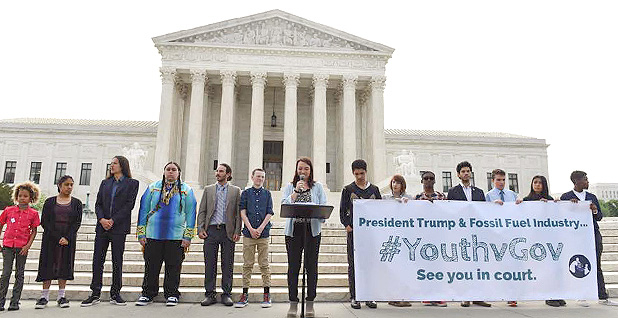 The children, teenagers and young adults who are suing the federal government in a landmark climate case stand in front of the Supreme Court last month. Photo by Robin Loznak, courtesy of Our Children's Trust.

The National Association of Manufacturers is trying to get out of a landmark climate change lawsuit that a group of children filed against the U.S. government.

In court papers submitted yesterday, lawyers for the industrial businesses trade organization indicated they were simply interested in streamlining the case, but otherwise provided little explanation for withdrawing. In 2015, NAM along with the American Petroleum Institute and the American Fuel & Petrochemical Manufacturers intervened in the youth-led lawsuit against the federal government for allowing decades’ worth of greenhouse gas emissions to balloon into the atmosphere, despite its institutional knowledge of climate change.

"Withdrawal would reduce the number of parties to this proceeding and, accordingly, reduce the amount of discovery and avoid the possibility of duplicative discovery efforts and duplicative proceedings," NAM said in its court filing.

The organization must have the judge’s permission to break away from the suit.

The request to drop out of the case is the latest indication of unease about the case among the industry associations. Intervening in the case exposed the trade associations, and possibly their member companies, to discovery and requests for records from the plaintiffs. And before NAM’s latest court documents were filed, multiple people with knowledge of the lawsuit told E&E News that one, two or all three of the industry groups could soon pull out of the litigation.

Their withdrawals could happen as soon as this week, sources said.

Our Children’s Trust, the Oregon-based organization behind the lawsuit, is trying to depose Cabinet secretaries about climate change and has sent sweeping requests for documentation from federal agencies.

The plaintiffs say the federal government has repeatedly infringed on their rights, including the opportunity to live in a safe and stable environment, by allowing and often accelerating carbon emissions through its actions.