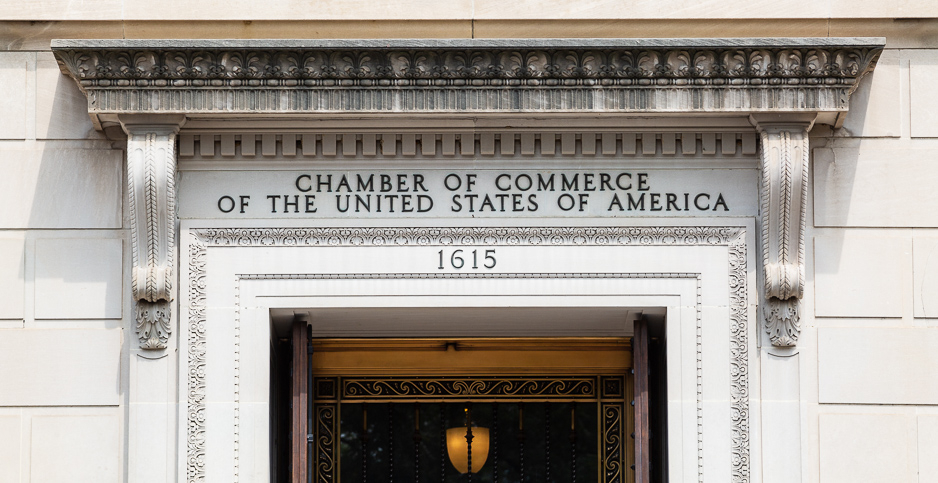 The U.S. Chamber of Commerce and other industry trade groups are seeking regulatory relief or asking that their employees be designated as essential during the pandemic. Francis Chung/E&E News

The economic impacts of the coronavirus are still rippling through the U.S. economy. But big business in industries from oil processing to paper making have one similar demand for policymakers: Designate our workers as essential.

Such a designation would allow refinery workers, paper mill operators and other essential employees to continue working in the event of a stay-at-home order — a drastic measure that more than a dozen state governors so far have put into effect.

At the same time, many industry groups are also making sure they don’t let a crisis go to waste, using the current pandemic as a new justification for some of their long-held policy priorities.

Here’s a rundown of what industries have been telling policymakers they need to weather the COVID-19 storm.

Chamber of Commerce and manufacturers

After initially downplaying concerns about the coronavirus, the U.S. Chamber of Commerce has responded to the pandemic’s growing economic fallout by urging aggressive government support for big businesses.

"Americans should continue to monitor the situation on the @CDCgov’s website but feel confident as they go about their daily lives," the Chamber tweeted March 11, while promoting airliners’ assurance that it was still safe to travel in the country.

Now Chamber President Tom Donohue is urging President Trump and congressional leaders to cancel payroll tax levies for the months of March, April and May.

In a March 16 letter, Donohue said employers remit more than $100 billion to the federal government, stressing that those taxes add more than 15% to the cost of employing the average employee.

He argued canceling the tax would "increase liquidity for employers to help them respond to losses in revenue." Critics on Capitol Hill say that relief would help people who have lost their jobs or work in the gig economy.

Donohue also asked for legislation "expanding and streamlining" loan programs for small businesses with fewer than 500 employees experiencing losses due to the pandemic. He also called for authorizing the Small Business Administration to "streamline its disaster loan approval process for amounts below $350,000 in order to provide emergency capital more quickly to small businesses in need."

In addition, he called for expanding the use of the Federal Reserve Discount Window to help facilitate loans to employers with more than 500 employees.

He said the Chamber plans to submit more recommendations to aid businesses in the coming days.

Similarly, National Association of Manufacturers President Jay Timmons called on the Trump administration to create a "Manufacturing Resiliency Fund," which would include $1.4 trillion in loans to give cash to manufacturers and small businesses.

Timmons also called on the government to deem the manufacturing supply chain "essential" to help mitigate interruptions in providing the supply of "critical products."

NAM laid out further details of government help in its COVID-19 Policy Action Plan that seeks to "keep manufacturing in America strong and ensure our nation’s economic resilience."

Among a long list of recommendations, Timmons suggested reducing regulatory burdens, including directing the Securities and Exchange Commission to "provide additional reporting flexibility" for companies affected by the coronavirus.

Timmons also asked the administration to develop a "targeted list of products for which Section 301 tariffs and retaliatory tariffs can be suspended or removed to spur economic growth." And in the interim "credit the tariffs being paid back to the companies affected."

In addition, Timmons asked for the creation of a White House initiative to "identify and reduce trade and regulatory barriers" to U.S. exports used in a pandemic response.

The American Fuel and Petrochemical Manufacturers (AFPM), a refinery trade group, "is engaging with regulators to proactively identify rules that could benefit from flexibility, including reporting deadline extensions," a spokesperson said today. "In many instances, employees responsible for reporting are now working remotely and auditors are restricted from travel."

Like the American Petroleum Institute (API), another oil industry trade group, AFPM is also asking EPA to consider waiving summertime limits on gasoline volatility, which are intended to reduce smog. "Our industry is facing a significant inventory management challenge as regions are not working through their stores of winter gasoline at the usual pace which could make it difficult to transition to summertime blends by June 1," AFPM said.

API yesterday urged EPA Administrator Andrew Wheeler to relax provisions of settlement agreements or consent decrees that many refineries have struck with the agency. In a 10-page letter, the oil industry group also listed a series of testing, monitoring and reporting requirements for potential leaks and hazardous emissions that it argued should be either delayed or waived during the crisis.

API’s requests "are not expected to result in a significant impact to human health or the environment," said Frank Macchiarola, the group’s policy chief. "By providing temporary relief from those requirements, operators and suppliers will be able to prioritize their resources on those critical activities to enable the continued production of fuels and products."

API sent a similar, albeit less detailed, letter to Trump last week asking for regulatory relief from the Interior Department and other agencies (Greenwire, March 23).

AFPM and API have both asked governors to consider their workers "critical" as well.

"In a perilous time, the essential work of our coal miners to produce the fuel to keep the lights on and homes warm and the certainty and security provided by coal power is just what we need to keep the country moving forward," NMA President and CEO Rich Nolan wrote (Energywire, March 20).

At the American Forest and Paper Association, spokesman Tim Ebner said the group’s only request — relayed in letters to Vice President Mike Pence and all 50 governors — has been for recognition of wood and paper products manufacturing as an essential business when government leaders are drafting "shelter in place" orders.

"AF&PA members make essential products," including tissue, food packaging and shipping containers, Heidi Brock, the association’s president and CEO, said in a statement last week. "Disruptions in the availability of these goods would cause significant hardships to consumers across the country who depend on steady and stable supplies," Brock said.

The federal government has not issued a nationwide shelter-in-place order. But with toilet paper shortages a defining feature of the coronavirus crisis, at least some state leaders appear to be receptive.

In ordering employers last week to rely on telecommuting "to the maximum extent possible" and slash their in-person workforces by 50%, New York Gov. Andrew Cuomo (D) granted the "essential" exception to manufacturers of household paper products, according to guidance posted on a state website.

Chemical and fertilizer makers’ main request so far has been to keep working during the crisis.

The White House has advised no gatherings larger than 10 people, and the Centers for Disease Control and Prevention is encouraging people to engage in social distancing, among other measures.

"While many of these limitations are currently in the best interest of public health, it is essential that key industries and sectors, including the chemical manufacturing sector, are able to maintain operations throughout this challenging time," American Chemistry Council CEO Chris Jahn wrote last week in a letter to Trump and 50 governors (E&E News PM, March 18).

The Department of Homeland Security last week issued guidance on designation of "essential critical infrastructure workers." Among them are fertilizer plant employees.

In a statement, Corey Rosenbusch, president and CEO of the Fertilizer Institute, another industry trade organization, thanked the Trump administration "for recognizing the critical role fertilizer plays in feeding our nation and the world."

The institute has since asked governors to follow DHS’s lead, a spokesman said today.