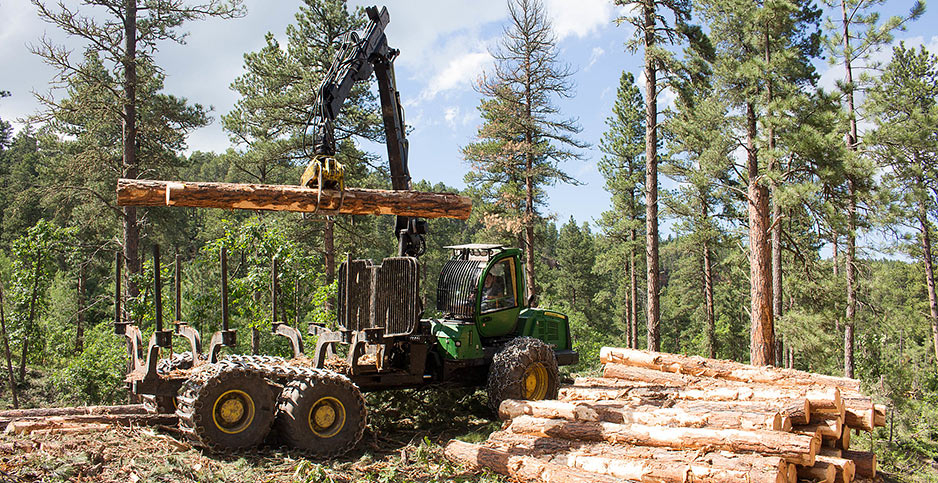 While the Trump administration has been criticized for tilting toward timber interests, an ongoing debate in Black Hills National Forest offers a contrast: The Forest Service has proposed saving a forest by cutting far fewer trees.

That’s the recommendation of Forest Service scientists, who say a combination of beetle infestations, disease, wildfire and decades of timber harvesting has left the 1.2-million-acre forest in South Dakota and Wyoming unable to sustain current levels of cutting.

In a draft technical report by the Forest Service’s Rocky Mountain Research Station, scientists said the forest can no longer support either the 18.1 million cubic feet allowed in the Black Hills forest plan, or the 15.3 million cubic feet produced in 2019.

To environmental groups, the report illustrates the effects of heavy timber harvesting in national forests. But the study has spurred objections from timber companies, which say it overstates the danger and risks damaging an industry that’s important to the region, if the Forest Service follows the advice. A public comment period on the report ended earlier this month.

"This highly unusual report, and its dramatic findings, show the extremes that can result when a publicly owned forests is run for private profit," said Ted Zukoski, a senior attorney with the Center for Biological Diversity, in an email.

Lawmakers from the affected states have taken an interest in the issue, as well. In late 2018, while discussions were unfolding at the Forest Service, Republican Sens. John Thune and Mike Rounds of South Dakota and John Barrasso and Mike Enzi of Wyoming, along with Republican Rep. Liz Cheney of Wyoming, asked Forest Service Chief Vicki Christiansen not to reduce the harvest target.

"Given that increasing the national timber program is a priority for this administration, it seems counter-intuitive to reduce the timber harvest," the lawmakers said in a letter.

In a response the following April, Christiansen said the agency would continue to collect data and would collaborate with industry and others on any forest plan revisions.

Then came the latest report. In it, the Forest Service researchers outlined several scenarios, including slashing the annual harvest to 12.5 million cubic feet this year, then 7 million cubic feet annually through 2025 — a level they said would help the forest recover and create a sustainable harvest.

Continuing current harvest amounts at the current level would deplete the forest of sawtimber by 2054, researchers said.

"This scenario, by far, represents the worst and most extreme possible future for forests of the Black Hills, and its likelihood of occurring is minimal," they said.

The study’s cautious approach to timber contrasts with the administration’s approach in other regions, including weighing the lifting of roadless-area restrictions in Alaska’s Tongass National Forest and in Utah.

In the Black Hills, the study said, the Forest Service should step up forest-thinning and prescribed burns that would encourage the growth of bigger trees — especially ponderosa pine — and speed the eventual return of more robust timber production. Some of that work, including timber sales, is ongoing, with the Black Hills forest recruiting employees from other regions to help fill a staffing shortage. Pandemic-related travel restrictions have put the moves on hold, officials said.

In the report, researchers noted that potential timber production depends on a variety of factors and assumptions about tree mortality, for instance.

That point fuels some of the timber industry’s objections. Among other complaints, industry sources said the Forest Service appears to assume that losses due to pine beetle infestation will continue at current levels, even though the government declared the outbreak over in 2016.

The Black Hills has long been a model for partnerships between the federal government, local officials and timber interests, especially in responding to the beetle infestation, said Ben Wudtke, executive director of the Intermountain Forest Association, a trade group.

The beetles are native, and infestations occur on a periodic basis. The worst outbreak was around the turn of the 20th century, which wiped out 90% of merchantable timber, according to the Forest Service.

Industry representatives and a recent academic study also point to the Black Hills as an example of a forest where harvest and forest management projects don’t generate as many legal challenges as in other areas, and where reviews under the National Environmental Policy Act take less time than in other regions. That may be due to a combination of Forest Service operations and a regional federal bench that has been less favorable to environmental groups, they said.

In the latest debate, the Forest Service’s actions could shape the future of the area’s small but important wood products industry, Wudtke said.

"The Black Hills National Forest has been ratcheting down timber for years," putting a strain on small companies that depend on sales from the forest, Wudtke said. "They’ve been starving for material for some time now," he said.