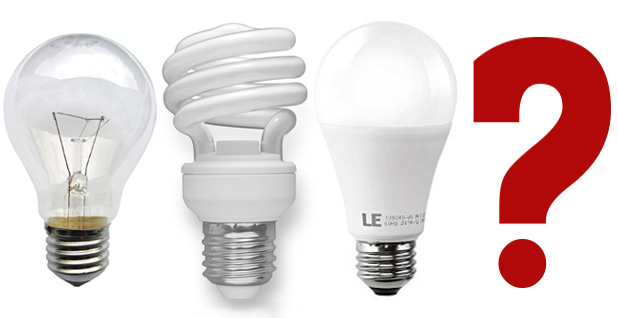 Industry groups are pushing back against Obama administration lightbulb rules that could determine the future of the market. Photos courtesy of Wikipedia.

Just ahead of Donald Trump’s inauguration, the Obama administration published rules that would hurry the phaseout of incandescent lightbulbs and save more energy than any efficiency standard in Department of Energy history.

Environmentalists and energy efficiency advocates cheered, calling the requirements critical for moving the U.S. energy sector into the 21st century. But critics jeered "midnight regulations" that they say impose illegal limits on consumer choice. One group filed a lawsuit and called on DOE to redo the rules.

Caught in the middle are manufacturers puzzling over how federal plans will interact with planned lightbulb standards in California.

"Our members are confused," said Terry McGowan, director of engineering and technology at the American Lighting Association.

The Obama administration created chaos by failing to complete a DOE rule setting minimum efficiency standards for lightbulbs. The department proposed efficiency levels in 2016 but ran out of time on a final standard (Greenwire, May 17, 2016).

Instead, DOE rolled out last-minute regulations in January that broadened definitions of general lightbulbs that would be covered under an efficiency standard. The rules outline the shapes and features of bulbs and cover a wide swath of products like ceiling lights and candelabra bulbs used in chandeliers.

The expanded definitions alone would save about double the energy of any other DOE efficiency rule, or 27 quadrillion British thermal units (quads) of energy, according to a report from Lawrence Berkeley National Laboratory. That’s partly because the lighting market is diversifying.

"The stakes are really high," said Andrew deLaski, executive director at the Appliance Standards Awareness Project, which was formed by the American Council for an Energy-Efficient Economy, Alliance to Save Energy, Energy Foundation and Natural Resources Defense Council.

Even though the Obama administration didn’t set an efficiency level, a "backstop" in a 2007 law requires that a standard of 45 lumens per watt be applied to regulated lightbulbs by January 2020, in the case of DOE inaction on an efficiency level by January 2017. Because that date passed, it’s expected that all the new covered bulbs would have to meet the "backstop" threshold.

Halogen incandescents still make up about 40 percent of the overall U.S. lightbulb market, according to industry statistics.

DeLaski said the plan likely would make LEDs the bulb of choice, since manufacturers also have moved away from CFLs, once considered the replacement for the old 19th-century-era bulb. The coiled fixtures never fully caught on with the public, partly because of concerns about mercury contamination.

"Will anybody be buying a CFL in two years? I don’t think so," deLaski said.

But the National Electrical Manufacturers Association is slamming President Obama’s last-minute regulations, saying in a letter to Energy Secretary Rick Perry released this week that the definitions cover models in odd shapes that divert far from the intent of Congress and the idea of a "general" lightbulb.

NEMA filed a related lawsuit and told DOE the rules "must be reviewed" under President Trump’s regulatory freeze memo in January.

DOE "flipped Congress’ intent on its head" and mistakenly concluded that its job was to eliminate the energy-efficient halogen incandescent bulb rather than determine whether a higher standard for it was economically justified and technologically feasible, the trade group said.

"Some hold the view that a 45-lumen-per-watt standard for all of these types of lamps is going into effect in January 2020," NEMA general counsel Clark Silcox said. "But that remains to be determined, and it is premature to say either yes or no until DOE follows the rules laid out by Congress."

Many of the covered products don’t look like standard incandescent bulbs and won’t even fit in the same socket as standard lightbulbs, the group said.

"Most troubling, the final rules included lamp types in the definition that Congress expressly said were ‘not included,’" NEMA wrote.

DOE should set standards for technologies separately — LEDs, CFLs and incandescents — so there’s not a one-size-fits-all standard for all technologies, said Tracy Cullen, a spokeswoman for NEMA.

One standard "puts American companies and workers at risk. It really annihilates any choice for consumers," said Cullen.

Some consumers, for example, have complained that they don’t like LED coloring. NEMA further contends that elimination of incandescent bulbs could lead to manufacturing shortages.

The group asked a federal appeals court in Richmond, Va., to review the DOE definitions. DOE did not respond to a request for comment.

Environmentalists say that DOE followed the law, and that there’s no looming manufacturing squeeze. Without the rules, there would be a huge loophole for industry to walk through, they say.

Noah Horowitz, an analyst at the Natural Resources Defense Council, said there are already efficient versions of nearly all the bulbs covered by DOE’s definitions. The rules resulted from a lengthy process led by DOE in which manufacturers and others were allowed to provide input, he said.

"LEDs would work fabulously with any" of the newly regulated bulbs, deLaski said.

In theory, a halogen incandescent could be engineered to meet 45 lumens per watt, but there’s little interest in trying to do so because of the low cost and performance of LEDs now, deLaski said.

"A few years ago, we paid $20 for these lightbulbs. Now we pay $2," said deLaski. "The industry is really embracing them."

LEDs jumped from about 5 percent of the U.S. market in 2015 to more than 30 percent now, according to market figures from NEMA. Companies like General Electric Co. announced in the past two years they were eliminating CFL production in favor of LEDs.

It’s critical that the Obama requirements remain in place because of the massive energy savings and a market that is moving toward newer types of bulbs, deLaski said. Industry statistics last year showed that interest in ceiling fan bulbs is skyrocketing, he said. There’s also a need to have efficiency standards cover widely used reflector lamps in ceilings, he said.

According to deLaski, a move by DOE now to redo the definitions would violate an anti-backsliding clause in federal law preventing the agency from issuing a weaker standard than an existing one. The backstop is also firm in federal law, he said.

He said it’s not the case that Congress intended DOE to define lightbulbs by shape, but rather by whether they provide general lighting.

Congress was "crystal clear," he said.

But NEMA disagrees, and for the American Lighting Association’s McGowan, the failure of the Obama administration to set an overall efficiency level caused another problem because of a separate planned regulation in California.

Those state rules — set to take effect next January — set high efficiency and color rendering standards for LEDs specifically, well beyond anything required in federal statute. California says the plan will save consumers money and slash emissions.

McGowan said he was worried the California rule could result in shortages and higher consumer prices.

There’s also a two-year window between when the California rules take effect and the start of the backstop in 2020, a long lag in the lightbulb market.

"Manufacturers can’t afford to drop out of California, so everybody will be using a California lamp," McGowan said.

Separately, NEMA asked Perry that DOE consider setting a separate efficiency standard just for LEDs, although it didn’t cite California as the reason.

McGowan said he would prefer to work within DOE, which has open rulemaking and set timelines and procedures.

"When you work with California," he said, "it’s a very different environment."