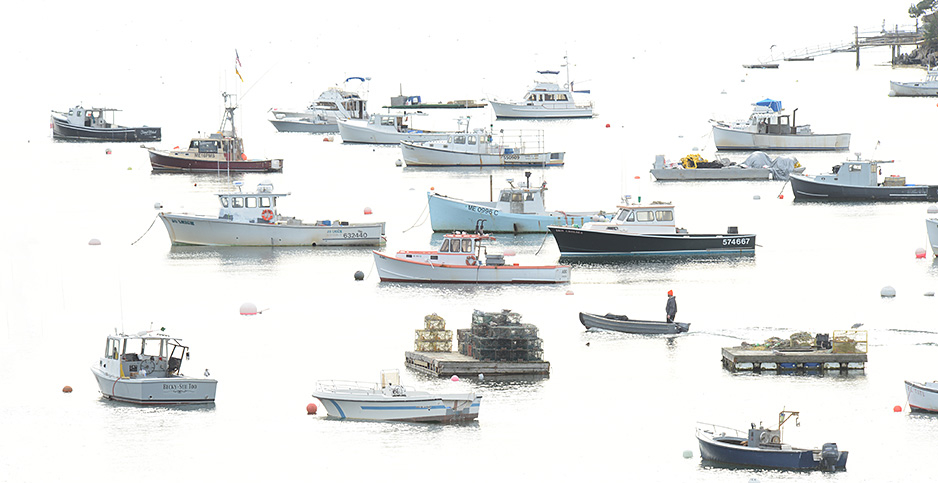 A fishing fleet is anchored in a Maine cove. The Biden administration is drafting policies to protect fisheries from climate change. Raul Touzon/robertharding/robertharding/Newscom

At least not in the ocean.

"I don’t think we’re in a climate crisis," Jeff Kaelin, director of sustainability and government relations at Lund’s Fisheries in New Jersey, told senior NOAA Fisheries officials. "We’ve been adapting for many years to ocean changes."

The comments occurred during a telephone town hall that was part of a little-noticed plan by NOAA to make the nation’s fisheries more resilient to climate change.

President Biden ordered NOAA to collect information from a wide range of groups on increasing the resilience of fisheries as part of his plan to address climate change and to protect 30% of U.S. ocean areas by the year 2030. The NOAA directive is included in the sweeping executive order Biden signed his first week in office that made "the climate crisis" a centerpiece of his presidency.

Fishing-industry representatives voiced their own urgency yesterday, expressing fear that NOAA Fisheries would put wide swaths of the ocean off-limits to both commercial and recreational fishing. Biden’s so-called 30×30 plan to conserve 30% of U.S. lands and waters by 2030 drew particular alarm.

"Seafood is the solution to many of our climate-related problems," said Eric Brazer, deputy director of the Texas-based Gulf of Mexico Reef Fish Shareholders’ Alliance.

Brazer and other callers said that reducing commercial fishing catches would force U.S. consumers to rely on "terrestrial" protein sources such as cattle that generate far more greenhouse gases.

"You’re taking away the livelihood of many people and being harmful in the process," said Jim Kendall, executive director of New Bedford Seafood Consulting in Massachusetts. "You need to consider the effects of what you’re trying to accomplish."

Jeff Angers, president of the Center for Sportfishing Policy, said recreational fishers and boaters are "America’s original conservationists" with a "long history of championing marine conservation including habitat restoration and ending overfishing."

"We know from history that when you do broad area closures, you increase carbon footprint, because boats have to spend more time looking for fish," Moran said.

Several fishermen said flatly that they don’t believe the climate is changing and that they thought Biden’s efforts are driven entirely by politics.

"The executive order is no more than the manifestation of an ongoing political campaign," Kaelin said.

"We are at a critical moment for fisheries. Climate change is challenging every aspect of fishery management," said Meredith Moore, director of the fish conservation program at the environmental group Ocean Conservancy. "The Biden administration must recommit to sustainable management of stock, ending overfishing and rebuilding our fisheries."

NOAA Fisheries is accepting comments through April 2 and is holding two additional conference calls in the next week to receive input.