Industry on new pipeline rule: ‘We have to be responsible’ 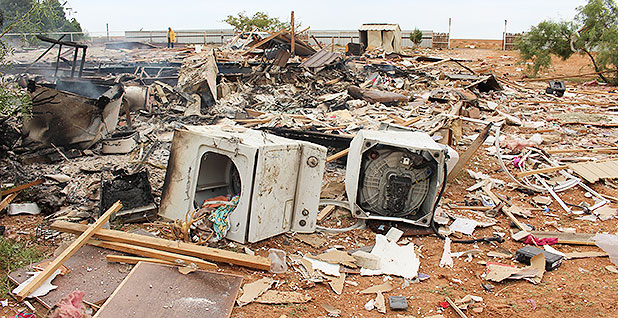 A clothes dryer in the wreckage of a family home that was destroyed by a gathering line explosion. Midland County fire marshal's office

Oil and gas industry representatives yesterday agreed, in concept, to regulate about 90,000 miles of pipelines in oil and gas areas for which there are no rules.

The proposed rules would cover gas gathering lines, which carry natural gas from well pads to processing sites. Explosions and ruptures of the lines have caused several deaths, including three in West Texas last summer. Under the proposal agreed to yesterday in a federal advisory hearing, all gathering lines 8 inches in diameter or wider would have to be marked above ground and surveyed for leaks.

"People have to know where our pipes are," said Ron Bradley, vice president for gas at PECO Energy Co., a Pennsylvania utility. "We have to be responsible to let the world know we’ve got something down there that has a pretty volatile chemical in it."

Such rules wouldn’t be implemented anytime soon, though. Federal pipeline regulators at the Pipeline and Hazardous Materials Safety Administration aren’t planning to finish the rule for another year. And companies would likely get several years before they need to do the leak surveys.

Operators of those lines would also have to alert people who live near the lines, develop emergency response plans and register the lines with "call before you dig" operations.

The proposals were drafted by a PHMSA advisory panel called the Gas Pipeline Advisory Committee (GPAC) in a two-day meeting in Washington, D.C., that ended yesterday. They go now to PHMSA, where officials decide whether and how to work them into a planned federal rule. If PHMSA officials reject the panel’s recommendations, they must explain why in writing.

PHMSA is now aiming to have the rule in place for gathering lines by August 2020.

Traditionally, gathering lines have been small, low-pressure lines, and regulating them has been a low priority. But the country’s shale gas drilling boom has led to construction of new, high-pressure gathering lines as big as cross-country transmission lines. Being classified as gathering lines in rural areas exempts them from a suite of complicated federal regulations about corrosion, inspections, repair and more.

Safety groups have pressed for rules on smaller lines. They point out that explosions on small lines have killed people, such as 3-year-old Delaney Tercero. Her family home in West Texas was blown up last summer by a leaking 10-inch gathering line (Energywire, March 4).

The accident was featured prominently in comments submitted by a pipeline safety group. GPAC Chairman David Danner and other panelists also mentioned the accident during the panel’s discussions.

But on Tuesday, Sara Rollet Gosman, a University of Arkansas law professor representing the public on the board, proposed creating a less comprehensive set of regulations for pipes between 8 and 12.75 inches.

Gosman, who is a board member of the Pipeline Safety Trust advocacy group, said she saw 8 inches as a "floor," above which all lines would have some sort of rules. Industry representatives were receptive.

"I like the theme of that," said Andy Drake, a Houston-based executive of Enbridge Inc., a large pipeline company.

After consulting with representatives of some of the industry trade groups whose members would be affected by the rules, Drake said yesterday they couldn’t reach consensus but added some large pipeline companies and other committee members saw the approach as "a practical next step." In a show of hands, the five GPAC members representing industry said they supported proceeding with the concept.

Later yesterday, the committee voted 11-1 for the concept of the limited rules for pipelines 8 inches and larger. The "no" vote came from Jonathan Airey, a retired oil and gas lawyer from Columbus, Ohio, appointed last year to represent the public. Airey said he supported PHMSA’s 2018 proposal to regulate pipes wider than 12.75 inches.

Federal regulations now cover about 18,000 miles of gathering lines, generally high-pressure lines in populated areas. An additional 439,000 miles of pipeline are classified as rural gathering lines and left unregulated. That’s enough to wrap around the Earth more than 17 times. Most are in oil and gas regions such as Texas and western Pennsylvania.

About half of the 90,000 miles of pipe covered under the plan are between 8 and 12 inches wide.

PHMSA’s proposal would also require pipeline owners to give detailed information about all gathering lines, including those not currently regulated.