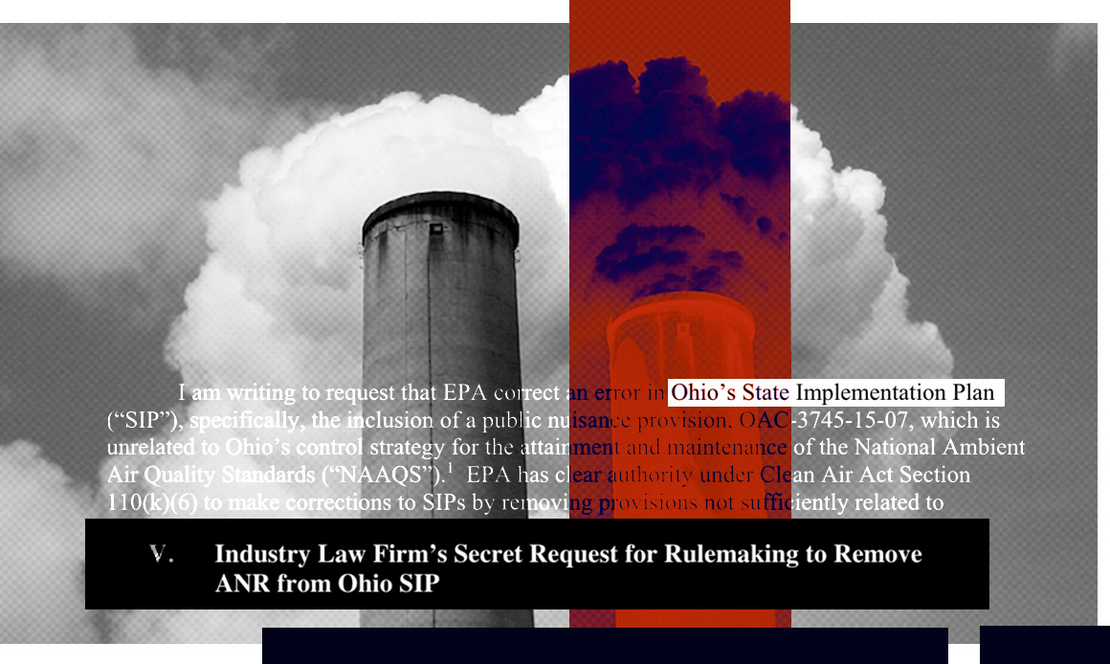 A mistake was made.

So wrote LeAnn Koch, a lawyer with Perkins Coie LLP representing an industry client, who argued in 2019 that a decades-old “nuisance” provision had no business being in the EPA-approved version of Ohio’s clean air plan.

By the next year, EPA officials acquiesced and struck the provision. The decision, a reversal of the agency’s previous position, swept away a legal foothold that Ohio residents had used over the years to take polluting companies to federal court on the grounds that their fumes and other releases posed a threat to public health.

It also left environmental groups wondering why EPA had flip-flopped.

Now, they say, recently disclosed records provide the answer: A stealth campaign by Perkins Coie, whose clients included a coal products company facing a lawsuit brought under the nuisance rule. Only late last year did EPA reveal the existence of the two 2019 letters written by Koch to top officials in the agency’s Midwestern regional office, urging them to scrap the rule.

The episode unfolded in one of the more obscure corners of Clean Air Act enforcement, but it raises broader questions about the extent of industry’s behind-the-scenes sway over the agency charged with protecting the nation’s environment. It also underscores the sometimes considerable power wielded by EPA’s 10 regional offices, which typically have the lead in day-to-day relations with state regulators in their respective bailiwicks.

“A polluter didn’t like the rules and sought to have them changed,” Megan Wachspress, a Sierra Club staff attorney, said in an interview. “For reasons that are mysterious to us, the EPA obliged.”

The group is one of several challengers now seeking to overturn the Trump-era decision in a lawsuit pending with the 6th U.S. Circuit Court of Appeals; the Biden administration is so far defending its predecessor’s move, filings indicate. EPA has also not replied to a petition asking that the decision be administratively scrapped, said Thomas Cmar, an attorney in private practice working with Wachspress.

Among the grounds cited in the petition are that the agency “parroted” industry arguments without disclosing the source and that the provision’s removal will have a “devastating effect” on fence-line and environmental justice communities in Ohio.

In a brief phone interview, Koch declined to speak on the record and did not later reply to emailed questions, apart from noting that EPA last week cited its Ohio decision in proposing to remove a nuisance provision from Kentucky’s clean air plan. Several past and present EPA employees declined to comment. In an email, Kurt Thiede, a Trump administration appointee who headed the Chicago-based regional office at the time of the 2020 decision, said he did not recall specifics but that he handled all state air plan approvals the same way: “Review the recommendations, ask questions, trust the staff’s work, and make the best decision based on that. “

The nuisance rule and its ‘unintended consequence of harming businesses’

What’s officially known as the “air nuisance rule” had been part of Ohio’s plan for complying with EPA’s National Ambient Air Quality Standards (NAAQS) for ozone, soot and four other common pollutants since 1974. It bars emissions “from any source or sources whatsoever, of smoke, ashes, dust, dirt, grime, acids, fumes, gases, vapors, or any other substances” in amounts that “endanger the health, safety, or welfare of the public.”

The rule “was an important regulatory tool” in the process of meeting the standards, William Auberle, a former Ohio regional air pollution control supervisor, wrote in a submission to the regulatory docket.

But in a June 2019 letter to EPA, Koch advanced a different argument. The nuisance provision had nothing to do with attainment or maintenance of the NAAQS and thus should be removed on the grounds that it was erroneously included, she told Cathy Stepp, who preceded Thiede as head of the Midwestern regional office.

Four months later, Koch followed up with a similar letter to John Mooney and Rett Nelson, two of the office’s top career staffers. The nuisance provision “has no connection with the purposes” for which state air plans are developed, she wrote. “Now that EPA is aware of the error,” she continued, the plan “should be corrected,” adding that rules similar to Ohio’s had been scrapped in many other state plans over the preceding two decades.

Neither missive mentioned that Perkins Coie was working on a securities offering worth up to $750 million for SunCoke Energy Inc., according to a prospectus. The company, then embroiled in a federal suit brought under the air nuisance rule, is a global producer of the distilled form of coal known as coke. Years earlier, SunCoke had agreed to pay almost $2 million to settle alleged Clean Air Act violations at the southern Ohio plant and another facility in Illinois (E&E News PM, June 26, 2013).

But air emissions at the Ohio operation later increased, according to the most recent data reported to EPA’s Toxics Release Inventory. Exposure to the pollution led to “coughing, gagging, nausea or vomiting,” attorneys for four nearby residents wrote in the 2017 suit, brought in U.S. District Court for the Southern District of Ohio and alleging conduct by the company “intolerable in a civilized community.”

SunCoke disputed many of the accusations. The case was still alive in June 2019 when Koch first wrote to EPA. While neither letter mentioned SunCoke, “time [is] of the essence because citizen suit actions are pending and being threatened based on the error” in the Ohio clean air plan, she wrote in an August 2019 email seeking a meeting with Thiede, according to records recently obtained by Cmar through a Freedom of Information Act request.

A follow-up message listed “SunCoke Meeting” as the subject. While it’s unclear whether Thiede attended the October session, she later thanked Nelson, then EPA regional counsel for the Chicago office, and Mooney, who now heads its air and radiation division, for hearing her out and again urged the agency to correct “an error that has had the unintended consequence of harming businesses in Ohio.”

Five months later, in March 2020, EPA formally proposed the air nuisance provision’s removal in what was labeled a “technical amendment” and then followed with a final decision late that year. In their comments on the proposal, the Sierra Club, Cmar’s firm and other critics objected that EPA had repeatedly reaffirmed the provision’s federal enforceability as recently as 2012. In the final rule signed by Thiede, EPA responded that such prior reaffirmations did not make EPA’s earlier stance any less of an error. “Rather, it merely indicates that EPA unfortunately repeated its error,” the rule said.

Nelson, now retired, declined to comment. Mooney referred questions to an EPA press staffer, who declined to comment on a matter that’s now the subject of the pending 6th Circuit suit. The 2017 District Court suit against SunCoke has since been settled on undisclosed terms; Cmar, whose firm represented the challengers, declined to comment when asked whether EPA’s decision to drop the air nuisance rule played a role. SunCoke was represented in that litigation by a firm other than Perkins Coie. No one from SunCoke’s media office replied to phone and email messages. Stepp, who left EPA in early 2020, could not be reached.

In his response to emailed questions from E&E News, Thiede added that he would have only proceeded “with approving the modification if the career staff had determined that we had the legal, technical and environmental support and rationale for doing so.”

Koch’s letters came to light last November when EPA disclosed their existence in the course in proceedings in the 6th Circuit litigation. Among the challengers bringing the suit are the Sierra Club; the Ohio Environmental Council; and Donna Ballinger, a southwest Ohio resident represented by Cmar’s firm who said that “nearly continuous waves” of air pollution from a steel mill a few hundred feet from her home have made life unbearable. Rather than cracking down on the mill’s pollution, state regulators asked why she didn’t move, Ballinger wrote in a court filing. But she can no longer use the nuisance rule to take the company to court, meaning that she is prevented from acting “to protect my family, my home and my community.”

Siding with EPA in the suit are Ohio state officials and trade groups like the Ohio Manufacturers’ Association. The agency’s response is due with the court next month.