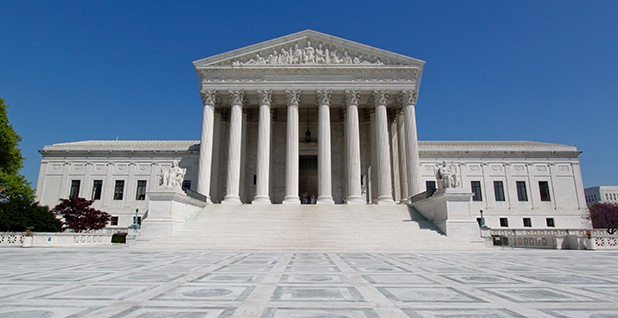 A Clean Power Plan replacement rule could help industry avoid a barrage of lawsuits by those claiming that greenhouse gases are a "public nuisance." Tim Sackton/Flickr

As the Trump administration mulls whether to replace the Obama-era Clean Power Plan, its legal foes are already plotting creative courtroom challenges against U.S. EPA and directly against utilities.

If the agency drags its heels on replacing the rule, declares that it won’t replace it at all or issues a narrower rule, lawsuits are certain. Among the tactics environmental lawyers are eyeing: bringing climate change "nuisance" claims under common law — where those suing would argue that they’re harmed by emissions — and filing direct citizen lawsuits against EPA. Those prospects have industry worried and are part of the reason some are pushing for a replacement.

"If EPA is not acting like it is taking this issue in hand and moving forward aggressively against this singularly serious threat … there will be more pressure for innovative remedies, innovative approaches," said Sean Donahue, an attorney representing environmentalists in the ongoing Clean Power Plan litigation. "A picture of abdication is going to inject a lot of energy into efforts to find other ways to get at these emissions," he said.

The prospect of being vulnerable to widespread common law and citizen lawsuits is extremely unattractive to industry, which could face steep legal costs and settlement fees. Having a replacement rule for the Clean Power Plan could help take some of the legal uncertainty off the table.

"I think that for several reasons, the vast majority of people in the business community believe that there should be a reasonable regulation instead of no regulation at all," said Jeff Holmstead, an attorney at Bracewell LLP. "Part of that is they think that that protects them against these nuisance suits, I think that’s certainly part of it. They would also just like to have some regulatory certainty."

Looming over the legal debate is a 2011 Supreme Court decision.

In the 2011 case American Electric Power Co. v. Connecticut, a state-led coalition sued six power companies, arguing it was hurt by the companies’ emissions contributing to climate change. But the justices ruled that the Clean Air Act pre-empted such federal common law claims. Because the court had previously ruled that EPA had the authority to regulate greenhouse gas emissions, the ruling was seen to preclude common law claims brought under federal law.

The question being pondered now: What if EPA doesn’t actually act to limit greenhouse gas emissions?

Multiple legal experts, though, said they see an uphill battle for climate change claims brought under common law, even in the absence of any EPA limits on greenhouse gas emissions.

That’s because, in the 2011 opinion, Justice Ruth Bader Ginsburg wrote that displacement occurred when Congress passed the Clean Air Act. "The Clean Air Act and the Environmental Protection Agency action the Act authorizes, we hold, displace the claims the plaintiffs seek to pursue," the opinion says.

Eric Glitzenstein, partner at Meyer Glitzenstein & Eubanks LLP, a D.C. law firm that was involved in AEP, was not optimistic about using federal nuisance cases either, citing the Supreme Court’s broad ruling in the 2011 decision. "I have a hard time seeing how one would get around that," said Glitzenstein, who represented Defenders of Wildlife, the Center for Biological Diversity and the National Wildlife Federation in an amicus brief in AEP.

According to Tom Lorenzen, an attorney at Crowell & Moring LLP who’s represented utilities in the litigation opposing the Clean Power Plan, "displacement continues to hold whether there’s a replacement rule or not because EPA has the authority to regulate under [the Clean Air Act]."

However, he added, "I think there’s less incentive for environmental groups and others to try to bring these suits if the federal government is regulating."

Judges ‘may take it into their own hands’

But experts note that the "displacement" in AEP extends only to federal common law and not to claims brought under state law.

"There’s nothing the Trump administration can do to shield power companies and coal companies from liability under state law, so they can’t get that kind of shield," said David Doniger, director of the Climate & Clean Air Program at the Natural Resources Defense Council.

As the Trump administration works to kill the Clean Power Plan, cities and counties in California are already turning to state common law.

David Bookbinder, counsel at the libertarian Niskanen Center and former climate attorney at the Sierra Club, said that judges have dealt with claims of injuries to people and property for centuries. While climate change cases are more complex, they may be more likely to succeed the longer Congress and EPA punt on regulating industrial emissions.

"The longer the delay, the more likely it is that judges, be they state or federal judges, will be receptive to the idea that they are the only ones who can do anything," he said.

He added: "The judges don’t want to do this. They would far prefer that either Congress dealt with it or EPA dealt with it. But they may take it into their own hands."

If the state lawsuits fail, it could increase the impetus for filing federal common law claims as a "tool of last resort," Burger predicted.

"It seems perfectly plausible that a city, a state, an environmental organization would say, well, what are we going to do?" he said. "The courts are blocking state common law avenues, the federal government is not doing anything, courts aren’t forcing them to do anything — we have to go back to the idea that there’s a right that’s being infringed on here."

Some conservatives are dismissing concerns about both federal and state nuisance cases.

The Texas Public Policy Foundation, a conservative nonprofit, pointed to the decision in AEP when representatives met with White House officials last month.

In a handout given to administration officials, the foundation noted it was difficult at both the state and federal level to prove injury from greenhouse gases from specific sources or categories of sources since they are emitted worldwide, from "virtually every nook and cranny of the developed and developing world."

"Even in the event that a legally defensible scientific case could be made that total global anthropogenic emissions are significantly contributing to climate change, allocating responsibility among emitters everywhere will be an impracticable task for federal courts to undertake," the group wrote.

If EPA declines to replace the Clean Power Plan or slow-walks a new rule, the agency will also likely face direct legal challenges from supporters of climate action, lawsuits known as citizen suits. States, environmentalists and health groups could file citizen suits that challenge the Trump administration’s unreasonable delay or failure to act.

It wouldn’t be the first time on this issue. In fact, the Clean Power Plan came about after a yearslong legal tug of war ultimately won by states that wanted EPA to crack down on climate-warming emissions.

After the 2007 Supreme Court decision finding EPA has the authority to regulate greenhouse gases, the Sierra Club and Our Children’s Earth Foundation then filed a citizen suit pushing EPA to craft power plant emissions standards. EPA responded by issuing a rule that set new performance standards for power plants but did not address carbon dioxide.

New York then filed a separate lawsuit in the U.S. Court of Appeals for the District of Columbia Circuit that prompted a 2007 settlement allowing EPA to take another stab at power plant standards, this time incorporating greenhouse gases. After years of additional legal wrangling and another Supreme Court decision affirming EPA’s authority, the Obama administration issued the Clean Power Plan.

"It’s almost certain that if EPA moves forward with the repeal and doesn’t do anything on the replacement or moves so slowly on the replacement that in effect nothing will happen, I would expect that there would be a lawsuit filed against EPA of the same sort arguing that EPA is thereby violating a nondiscretionary duty," said Richard Revesz, director of New York University’s Institute for Policy Integrity.

Some conservative lawyers have pushed back on just how firm that duty is. They have argued that the Clean Air Act simply does not give EPA the tools to regulate carbon dioxide emissions from power plants, or that the agency’s determination that such emissions endanger public health is not specific enough to compel regulation for the power sector.

Environmental lawyers largely shrug off those arguments, pointing to EPA’s 2009 endangerment finding for greenhouse gases and Supreme Court cases that have affirmed the agency’s authority.

"If he does nothing at all, we can bring various kinds of litigation to force him to act," NRDC’s Doniger said. "The D.C. Circuit itself has indicated that he has an obligation to act, and at least some of the judges there are looking at their wristwatches."

Doniger was referring to a recent concurrence from two D.C. Circuit judges who agreed that litigation over the Obama rule should be put on hold but cautioned that EPA has a legal duty to act on climate change.

"Combined with this court’s abeyance, the stay has the effect of relieving EPA of its obligation to comply with that statutory duty for the indefinite future," Judges David Tatel and Patricia Millett wrote in August. "Questions regarding the continuing scope and effect of the Supreme Court’s stay, however, must be addressed to that Court."

Revesz said that the uncertainty provides a good reason for the D.C. Circuit to decide whether the Obama rule is legal. The court has put litigation over the rule on hold as the Trump administration decides what to do with the rule.

"The fact that this litigation is likely to be coming up down the road actually provides a pretty strong argument for the D.C. Circuit to decide the pending challenge to the Clean Power Plan now as opposed to waiting for this whole process to unfold," Revesz said.

He added: "If the D.C. Circuit, for example, upheld the Clean Power Plan, a lot of these things would get resolved. There’d be no federal common law actions. We would know that the repeal is illegal, and there would be a fair amount of certainty and less litigation."