Industry to EPA: We want rule ‘fixed, not just gone’ 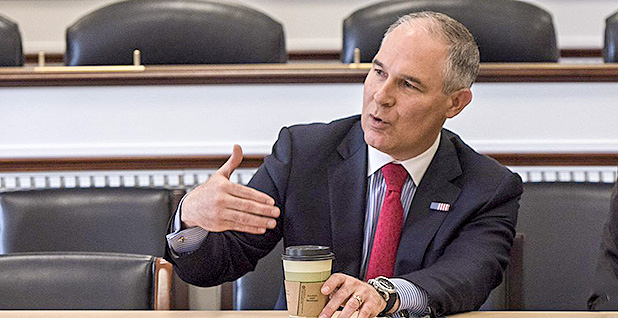 Industry has delivered a clear message to the Trump administration during a series of recent closed-door meetings: Don’t completely gut the Obama-era Clean Power Plan.

To be sure, leading industry associations are pushing White House and U.S. EPA officials to drastically roll back the landmark climate change rule. They’re advocating a new approach that still limits power plants’ emissions but is narrower than the one envisioned by President Obama’s team.

The heavy-hitting U.S. Chamber of Commerce and the National Association of Manufacturers advocated an "inside-the-fence" approach to power plant regulations during a July meeting with the Office of Management and Budget and EPA staff, they told E&E News. Critics of the Obama rule have argued that it overstepped by allowing emissions reductions "outside the fence line" of coal-fired power plants.

"We were trying to also lay the foundation for what we think would be an acceptable replacement rule because we want to see this rule fixed, not just gone forever," Ross Eisenberg, vice president of energy and natural resources policy with NAM, said in an interview.

Matt Letourneau, spokesman for the Chamber’s Institute for 21st Century Energy, said in an email: "It’s safe to say we" pushed for inside-the-fence-line.

In rescinding the rule, EPA chief Scott Pruitt plans to argue that the Obama administration went too far in setting carbon reduction goals by looking at what the broader power system could achieve instead of focusing solely on improvements at coal plants, an administration official told E&E News in June (Climatewire, June 12).

The recently publicized meetings with industry hint of a nearing Trump administration decision on how and whether to regulate carbon emissions from power plants, though devising a formal rule could take several months. While OMB and EPA meet with a variety of interest and business groups affected by pending regulations, the Chamber and NAM carry considerable weight in the business community that President Trump has courted.

The meetings came after recent reports that EPA was planning to pursue a legal strategy known as the "112 exclusion," which argued the agency couldn’t regulate power plants under Section 111(d) of the Clean Air Act — as the Clean Power Plan proposed — because they were already hit with limits for mercury and air toxins under Section 112.

Those pushing for a full Clean Power Plan repeal have acknowledged that a twin effort to scrub the endangerment finding may be necessary to ward off lawsuits that EPA wasn’t doing enough to address emissions. A move to develop any carbon rules for power plants, however, would amount to an implicit admission that greenhouse gas emissions deserve curbing.

"If they had already decided that’s what they wanted to do, then there would be no reason to develop this inside-the-fence-line approach," Jeff Holmstead, a partner at Bracewell LLP and former EPA air chief under President George W. Bush, said in an interview.

The White House referred E&E News to EPA, which did not return a request for comment.

EPA officials under Obama argued the electricity system required regulation as an interconnected entity, thereby achieving emissions reductions beyond power plants’ physical parameters. Opponents, though, said that view was too expansive — some have argued regulations must apply to power plants themselves, while others maintain EPA lacks authority to regulate power plant carbon emissions because it already caps mercury emissions.

Utilities have pushed for the inside-the-fence-line approach rather than a full dismantling of the Clean Power Plan because they say it provides more certainty. They argue that something like requiring on-site efficiency improvements could prevent future presidents from pursuing ever-more aggressive rules. Detractors in the environmental community note, however, that emissions reductions under this scenario would be small.

The Edison Electric Institute, a trade group representing investor-owned utilities, declined to say what it advocated for in its July 26 meeting — for which White House energy adviser Mike Catanzaro was present — though it has in the past advocated for an inside-the-fence tactic.

An industry source who wasn’t present for that meeting noted Catanzaro had expressed "skepticism" about the administration’s ability to overturn the endangerment finding. The source said Catanzaro was concerned about getting into endless litigation, as the administration would need to compile anthologies of climate change science that refuted greenhouse gas emissions’ effects on a warming planet — a heady if not impossible task.

That said, the industry source wasn’t ready to take bets on where the administration would end up on the Clean Power Plan.

"There’s wide agreement among the utility industry that inside-the-fence-line would make more sense," the source said. "But there’s certainly other people pushing for a different approach, including people who have sway with this White House. I’d be very cautious saying anything definitive."

An inside-the-fence-line plan is "ultimately not enough in the long term" when it comes to restricting regulation on energy, said Tom Pyle, president of the conservative Institute for Energy Research. Pyle said in an interview that he’s "not surprised" the business community is lobbying for that approach, though.

"Obviously wherever as aggressively EPA could go is where I’d be comfortable with," said Pyle, who also ran Trump’s Energy Department transition team, stating his desire to whack the endangerment finding.

Some haven’t given up hope on the Section 112 exclusion and an ultimate challenging of the endangerment finding. Myron Ebell, director of the Competitive Enterprise Institute’s Center for Energy and Environment, said in an email that the White House could ask for input on both the inside-the-fence-line approach and Section 112 exclusion in the public comment portion of the rulemaking process after rescinding the Clean Power Plan.

To environmental groups, a move to regulate inside the fence line would signal that the administration is taking policy cues from industry rather than the far right. Utilities and manufacturers, after all, were chief advocates of such a plan when the Obama administration rolled out its regulation, which sought a 32 percent reduction of power plant emissions below 2005 levels by 2030. That largely relied on shifts from coal-fired power to natural gas and renewable energy.

"An inside-the-fence-line approach with an argument in the alternative that industry lacks authority to regulate carbon emissions under Section 111 follows the industry talking points to a T," John Walke, senior attorney and clean air director with the Natural Resources Defense Council, said in an interview.