Industry trumpeted Tillerson. Then it found other allies 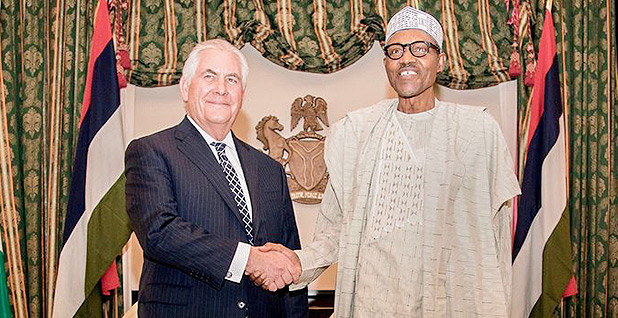 When President Trump first nominated Rex Tillerson to lead the State Department, the appointment was widely viewed as a victory for the oil sector as it gained a number of allies in Washington, including Energy Secretary Rick Perry and Interior Secretary Ryan Zinke.

Tillerson carried with him to the State Department a wealth of experience in forging partnerships with foreign leaders. He was seen as an ideal pick to potentially improve U.S.-Russia relations, a goal Trump iterated on the campaign trail (Energywire, Dec. 12, 2016).

But though he was the former chief executive of Exxon Mobil Corp., Tillerson has played almost no significant role in the Trump administration’s efforts to enhance the oil and gas industry’s clout. Zinke has led the push to expand drillers’ access to federal onshore and offshore lands, while Perry has championed fossil fuels and further DOE support for fossil energy research.

When Trump fired Tillerson yesterday via Twitter, industry offered no comment, and some officials even saw an upside. Tillerson’s time at State was marked by staffing issues that, if resolved, could be good for the U.S. oil sector internationally.

"If anything, his time at State injected a lot of uncertainty in diplomatic circles, and that of course ripples out into international investment opportunities, particularly in the oil space and others as well," said Kenneth Medlock, director of the Center for Energy Studies at the Baker Institute for Public Policy at Rice University. "He actually had a lot of deputy positions that were left unfilled, and that created consternation among the diplomatic corps around the world, and when that sort of stuff is happening, it means that things kind of grind to a halt."

The shortages also impacted the State Department’s Bureau of Energy Resources, the department’s liaison with the oil industry, Medlock said. "Various initiatives either never get off the ground or don’t really make much progress, which effectively means for the last year you’ve had somebody who was a figurehead but not been able to really do much," he said.

Tillerson’s departure marks the latest example of more centrist-thinking, internationally oriented members of the Trump administration being ousted from this administration in favor of those taking harder-line views of international relations and trade (Greenwire, March 13).

Trump told reporters in Washington that Tillerson’s removal has been in the works for a while.

"Rex and I have been talking about this for a long time," Trump said, according to a pool report. "We got along, actually, quite well, but we disagreed on things. When you look at the Iran deal, I think it’s terrible, I guess he thought it was OK. I wanted to either break it or do something, and he felt a little bit differently.

"So we were not really thinking the same. With Mike, [CIA Director] Mike Pompeo, [who will replace Tillerson], we have a very similar thought process," Trump added.

Tillerson had long been considered an advocate of Russia and of its president, Vladimir Putin. It was CEO Tillerson who in 2012 signed a historic agreement between Exxon Mobil and Russian state-owned oil giant Rosneft to jointly develop Russian shale and oil and gas resources in Siberia. In 2013, Tillerson was awarded the Russian Federation’s Order of Friendship by Putin in response. U.S. sanctions against Russia for invading Ukraine essentially froze all of Exxon Mobil’s ambitious plans.

Exxon recently announced its withdrawal from the Rosneft deal, citing sanctions on Russia’s oil industry enacted after the Ukraine invasion.

In a note to clients, analysts at ClearView Energy Partners LLC argued that Pompeo’s appointment as secretary of State could prove better for Russia than if Tillerson were to remain.

"The changes could also reinforce a light U.S. sanctions touch on Russia and accelerate Venezuelan crude sanctions," they wrote. "Escalating Trump Administration trade nationalism may also presage a shift from globalism to isolationism on sanctions issues. Tillerson’s departure seems likely to intensify this effect, as well."

During his tenure as secretary of State, Tillerson maintained a hard line on Russia and gave no indications that sanctions on Moscow would be relaxed or enforced only lightly. He worked to quell talk of potentially barring Venezuela from selling crude oil to the U.S., an idea opposed by U.S. oil refineries.

Medlock said the sanctions are minimally affecting Russia’s ability to sell its oil and natural gas to customers. He offered as an example Russia-sourced liquefied natural gas ending up in New England markets. But Russia faces longer-term challenges with its oil production if it remains locked off from Western capital and technology, unless Chinese investors fill the gap, he said.

Though Russian LNG slipped past the sanctions regime to land in Boston Harbor, "that’s not necessarily, though, an indication of his role as secretary of State and the effectiveness of the sanctions, it’s more an issue of this is how markets work," Medlock said. "The question of sanctions on Russia really isn’t fundamentally of their effectiveness, or really fundamentally of who the secretary of State is. It’s really an issue of how well the U.S. can establish relations with other countries that could actually matter in terms of whether those sanctions survive in the long term."

Now that he’s out, politicians and political actors in Washington have lined up to react to Tillerson’s departure from State. The oil and gas industry wishes to remain silent, however. The industry’s more effective allies at the top of Interior and DOE remain in power for the time being.

"TXOGA does not have a comment on this," said Gretchen Fox, a spokesperson for the Texas Oil and Gas Association.

House Foreign Affairs Chairman Ed Royce (R-Calif.) said in a statement that the U.S. government was losing a key asset.

"Rex Tillerson has served our country with great energy and determination," he said. "He is a good man, a thoughtful leader and a business titan. Thanks to his diplomatic efforts, we have charted a new course to counter the full range of threats from Iran and apply maximum pressure on Kim Jong Un."

Naturally, not every lawmaker agreed.

Rep. Nita Lowey (D-N.Y.) of the House State and Foreign Operations Appropriations Subcommittee was more critical, saying, "Rex Tillerson’s tenure as secretary of State was obviously unsuccessful." Lowey alluded to the discord that Medlock noted, adding that Tillerson’s "misguided so-called reorganization of the State Department has plunged our diplomatic and development corps into crisis."

Environmentalists were livid when the news first came that the head of Exxon Mobil would be running State. Wenonah Hauter, executive director of Food & Water Watch, issued approving remarks on Tillerson’s exit. "America’s premier oil and gas booster should have no role in U.S. diplomacy at a time when we urgently need to transition off of fossil fuels."

Tillerson remains a multimillionaire from his time leading the U.S.’s largest vertically integrated oil and gas company. If he re-enters the oil industry, it could be in an advisory role on a company board.