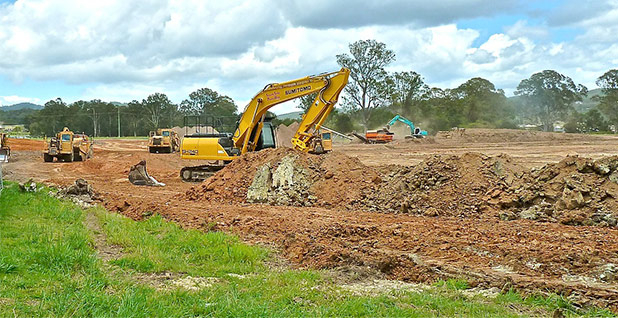 Heavy equipment operators clearing land at the start of a construction project. MemoryCatcher/Pixabay

The Trump administration has sought a slate of quick regulatory reforms over the past year, tweaking environmental permitting requirements everywhere from EPA to the Federal Communications Commission.

But potentially the most consequential change will be a slower burn. The White House Council on Environmental Quality is seeking to update its National Environmental Policy Act regulations, a process experts expect could take over a year.

The CEQ standards serve as the framework for NEPA permitting across the federal government. They got a minor amendment in 1986 under President Reagan, but otherwise, they’ve been untouched since they were first finalized in 1978.

"Anytime regulations are changed for the first time in more than 40 years — significantly changed — it’s a big deal," said Fred Wagner, a partner with Venable LLP’s Environmental Group who served as chief counsel for the Federal Highway Administration in the Obama administration.

"The regulations have served the community pretty well for a long time," he said, "but I think there’s a general sense that updating them in light of recent statutory changes, in light of recent administrative initiatives, makes sense."

CEQ declined to comment for this story. But Ted Boling, associate director for NEPA at CEQ, said at a conference this month that changes to the regulations are just one in a range of tools CEQ is looking at to clean up what the Trump administration sees as inefficiencies in the NEPA process.

For an infrastructure project, the average time between the beginning of scoping and producing a draft environmental impact statement is two years and 10 months, Boling said at the conference, sponsored by the Environmental Law Institute.

"So what you’re saying as part of the scoping process is, ‘Thank you for your input on this project. We’ll get back to you in maybe 2 ½ years with a draft environmental impact statement,’" Boling said. "We can do better than that."

Most projects don’t require an environmental impact statement. And some of those inefficiencies come as the result of individual agency policy or staffing, rather than CEQ’s regulations.

Still, delays on major projects that do require an EIS cost money year after year, Wagner said. And the two most recent major transportation bills — the Moving Ahead for Progress in the 21st Century Act (MAP-21) and the Fixing America’s Surface Transportation (FAST) Act in 2015 — provide models of what CEQ might seek to change.

CEQ might require, for example, that agencies combine the final EIS and record of decision (ROD) into a single document, a change that is already in place for certain transportation projects under MAP-21.

Currently, the law requires a 30-day cooling-off period between the two documents, but it sometimes gets extended as agencies deal with more public comments on the final EIS, Wagner said.

Another possibility would be to have one ROD document for the whole federal government, rather than one for each agency. That’s a tweak President Trump has already floated with his Aug. 15, 2017, executive order and a subsequent interagency agreement signed last month (Greenwire, April 9).

Other changes based on the FAST Act and MAP-21 might be in order, but generally speaking, the regulations are sound, said Larry Liebesman, a senior adviser with Washington water resources firm Dawson & Associates who worked on the 1978 standards during his time at the Justice Department.

"I think a lot of the real objections can be addressed through fine-tuning of the existing regs," he said. "Don’t throw the baby out with the bathwater, so to speak."

Industry groups and environmentalists alike will get a chance to weigh in as public comments get underway in coming months, but the process will be complicated.

CEQ earlier this month submitted a draft advance notice of proposed rulemaking to the Office of Information and Regulatory Affairs (E&E News PM, May 7). It was included in the spring Unified Agenda, though it hasn’t yet been published in the Federal Register for comment.

But for those seeking to streamline the regulations, it may be difficult to find common ground with the environmental groups that will inevitably comment and possibly sue if there are any legal blips in the process.

They’re looking to go in the opposite direction with reforms to CEQ’s NEPA regulations, said Raul Garcia, legislative counsel with Earthjustice.

"There is very little in there, and I think there needs to be more, on how to engage communities on the ground," Garcia said.

Garcia and other environmentalists argue that it’s a lack of staffing and funding — rather than statutes or regulations — that holds up the process.

"The problem is not NEPA; the problem is that you’re not funding the agencies that carry out NEPA, CEQ being front and center on this," Garcia said.

Other observers point out that one of the biggest holdups in the NEPA process — litigation — would have to be addressed through statute, rather than regulations.

For CEQ, it may also be difficult to pinpoint how, exactly, it can change its regulations to fix what the administration sees as a laborious NEPA process.

The current regulations state that EIS documents "shall normally" be fewer than 150 pages, and fewer than 300 for unusually complex projects.

The wording of that guidance is nearly identical to a memo Interior Deputy Secretary David Bernhardt issued to his agency last year (Greenwire, Sept. 6, 2017).

"It’s already here, but it’s just never really been enforced," Wagner said. "So the question becomes, why not? And if it’s already in the regulations, what else do you have to say?"

The memo advises that even large complex energy projects "would require only about 12 months for the completion of the entire EIS process."

Those are just two of many examples of where critics of NEPA — namely, the transportation and energy industries — might be able to work with agencies to cut down permitting time within existing regulatory frameworks, Wagner said.

"But I think what people want to see is a little bit more oomph, for lack of a better word, in the regulations," he said.

Environmentalists fear that even apparently reasonable changes to the NEPA regulations could be co-opted by bad-faith political forces in the Trump administration.

But for now, CEQ is without appointed political leadership, since Kathleen Hartnett White withdrew her name from consideration as its chair when it became clear that her nomination would not pass the Senate.

"Without a leader there that understands the NEPA process, that’s a problem," Liebesman said.

Boling, for his part, is a well-respected career official with more than a decade of experience working under Democratic and Republican presidents. He could help fend against those in the administration that see NEPA as an "albatross," Liebesman said.

Still, the agency may have time to get a leader confirmed before the process wraps up. Each step is likely to draw a wealth of public comments.

"I think it’s going to be several years before you see any revised NEPA regulations," Liebesman said.