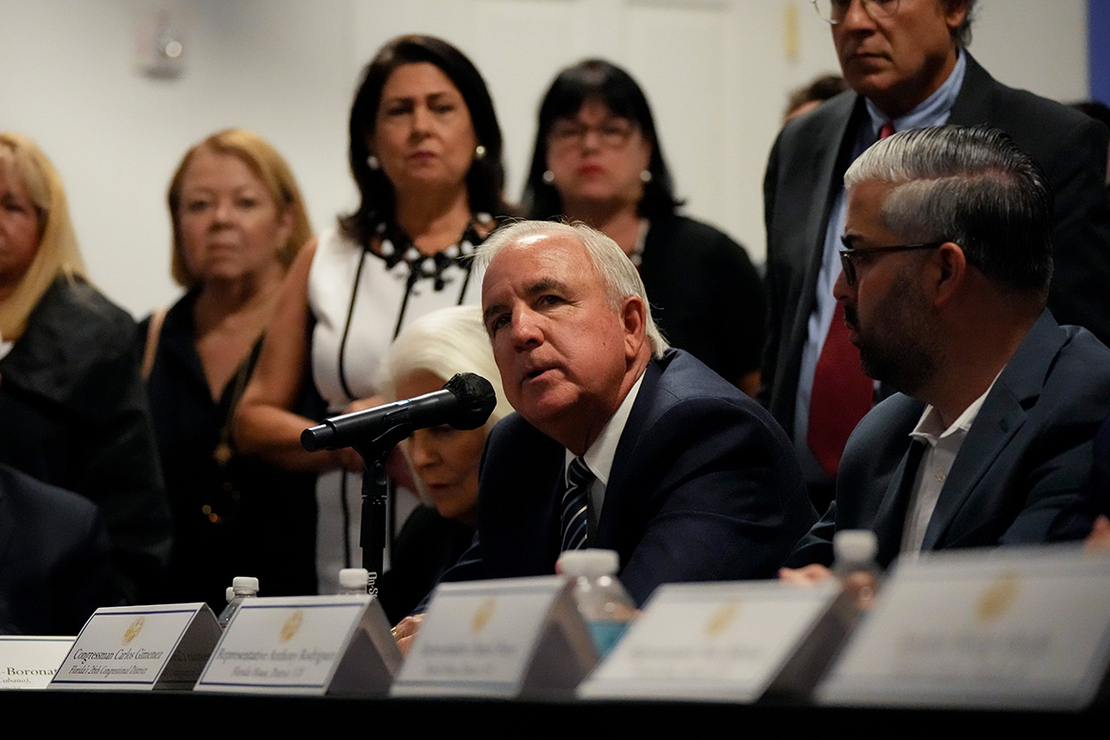 One project would raise a flood-prone road in the Florida Keys. The other would rebuild a pump station in Washington state for flood protection.

But now the projects are slated to get millions of dollars from FEMA due to recent earmarks Congress approved despite FEMA’s previous determination that the projects were not cost-effective.

Rep. Derek Kilmer (D-Wash.) got $10 million for the pump station.

The earmarks are included in the newly enacted fiscal 2022 budget, which is the first spending plan in more than a decade to contain so-called congressionally directed spending. Lawmakers revived earmarks under tight rules, including new disclosure requirements and limits on who can receive them.

But earmarks remain controversial, particularly for programs such as FEMA mitigation grants that are highly competitive, have strict eligibility criteria and are central to addressing climate change. FEMA’s grants are separate from its emergency aid that helps communities recover immediately after major disasters.

“If you have a program that’s set up to be competitive or has formula- or merit-based criteria, those are absolutely places that should not be earmarked,” said Steve Ellis, president of Taxpayers for Common Sense, which opposes earmarks. “These projects are undermining the competitive, merit-based program.”

The two flood earmarks are funded through a system that is best known for authorizing FEMA’s popular Building Resilient Infrastructure and Communities (BRIC) grant program. FEMA has established extensive criteria for approving BRIC applications, including a requirement that projects be cost-effective.

Officials in Florida and Washington had sought BRIC grants last year for the flood projects and were rejected — along with hundreds of other applicants.

Anna Weber, a senior policy analyst at the Natural Resources Defense Council, said that using earmarks to fund projects that FEMA has deemed ineligible “shows that not only can projects from well-connected communities skip to the front of the line, but also that they can circumvent the eligibility requirements that FEMA has put in place.”

Kilmer defended his earmark, saying the pump station would provide “critical coastal flood protection” for two small cities near the Washington coast that face repeated flooding, caused in part by a creek that overflows.

Kilmer spokesperson Andrew Wright said FEMA’s rejection of the application last year “was specific to the BRIC program for that specific year’s criteria.” The rejection “does not mean the project itself would not be eligible for FEMA funding in general,” Wright added.

Lisa Tennyson, director of legislative affairs and grants acquisition for Monroe County, Fla., said the project funded by Gimenez’s earmark “will resolve a persistent flood issue for an entire neighborhood.”

The earmark will cover 70 percent of the $7.9 million cost of elevating three flood-prone streets and building a drainage system in a subdivision in Key Largo, which sits on a barrier island off the south coast of Florida. A state grant will cover the rest of the project cost.

Gimenez said in his earmark request that the improvements would keep the roads open during major storms, enabling residents to evacuate and allowing rescue and recovery workers to enter the neighborhood.

FEMA rejected Monroe County’s application for a BRIC grant last year for the project because it was not cost-effective, Tennyson said.

Brian Shay, city administrator in Hoquiam, Wash., made a similar comment. Shay said he believed the application last year for a BRIC grant to rebuild the pump station was rejected because FEMA found the project was not cost-effective.

Hoquiam, a city of 9,000 people on a bay near the Washington coast, will get Kilmer’s $10 million earmark to build a $16 million pump station that will reduce flooding from the Fry Creek during high tides and severe rainstorms.

“When we have heavy rain and high tides, that creek often has significant flooding, affecting large swaths of the cities,” Shay said, referring to Hoquiam and neighboring Aberdeen. “The new pump station would significantly eliminate flooding in those two communities.”

FEMA declined to explain to E&E News why it ruled the Key Largo and Hoquiam projects were “ineligible” for BRIC money last year. The status of the 985 BRIC applications last year is shown on a publicly available FEMA spreadsheet.

FEMA approved 406 projects for $500 million, rejected 156 as “ineligible” and turned down another 423 projects that were eligible but rated low on a FEMA scoring matrix. The Gimenez and Kilmer earmarks appear to be the only ones in the 2022 budget that involve projects FEMA had found ineligible last year.

FEMA policy lists two pages of eligibility criteria for BRIC grants including a stipulation that a project “must be cost-effective.”

“Cost-effective” means that the financial benefit of a project — measured by the amount of property damage that would be averted — must match or exceed the project cost.

“It basically means, are we getting our money’s worth,” Ellis said of the taxpayers group. Applications deemed ineligible “are projects that just didn’t make the grade.”

FEMA has set aside $1 billion for BRIC grants this year as the Biden administration increases federal funding to address climate impacts. The agency also revised its selection criteria to give more BRIC funding to underserved and at-risk communities as part of the administration’s broader equity and environmental justice goals.

Earlier this year, FEMA said it received applications seeking a total of $4.2 billion in BRIC grants. The recipients will be announced this summer.

“Congress should put a priority on funding BRIC and facilitating this [equity] process, not short-circuiting it,” said Weber of the Natural Resources Defense Council.

The earmarks by Gimenez and Kilmer are among 68 in the fiscal 2022 spending package that direct FEMA to undertake specific mitigation projects. The earmarks’ combined cost is $154 million, and the spending law includes $154 million to pay for them.

The funding means the earmarked projects will not compete directly for BRIC grants with communities that applied for funding this year.

“BRIC is a competitive grant and this special congressional directed spending is not part of BRIC. It is a different allocation,” FEMA said in a statement to E&E News.

Wright, the spokesman for Kilmer, said FEMA “preliminarily reviewed the eligibility” of the 68 earmarks and “will now conduct a more thorough review” to make sure each project complies with BRIC requirements.

Even if Congress funded a FEMA project with an earmark, “FEMA will not obligate the funding to the recipient unless the BRIC program requirements are met,” Wright said.