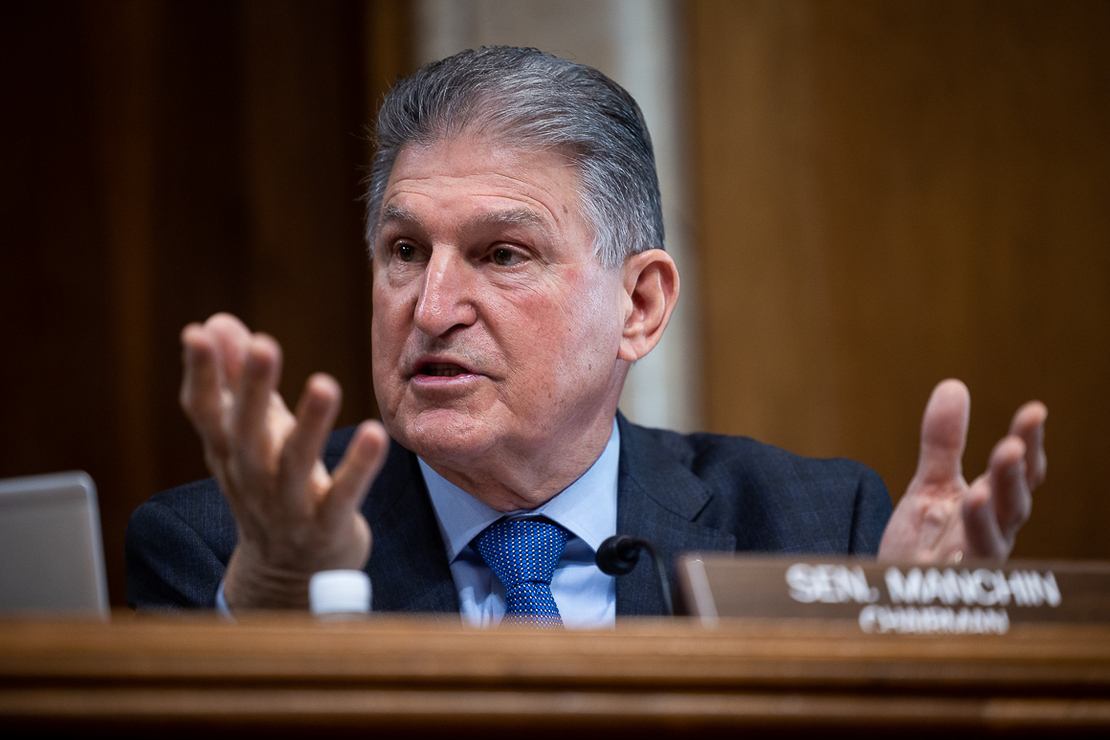 The consumer price index rose 7.5 percent over the last year, the fastest pace in since 1982, the Bureau of Labor Statistics said yesterday. The index rose 0.6 percent in January.

The eye-popping January numbers reverberated around Capitol Hill, as Manchin — the Senate’s crucial swing vote — said lawmakers should prioritize getting prices under control.

“Congress and the Administration must proceed with caution before adding more fuel to an economy already on fire,” Manchin said in a statement after the numbers were released. “As inflation and our $30 trillion in national debt continue a historic climb, only in Washington, DC do people seem to think that spending trillions more of taxpayers’ money will cure our problems, let alone inflation.”

It’s a concern Manchin, the Senate Energy and Natural Resources chair, has discussed publicly for months, and it was one of the reasons he announced his objection to the House-passed $1.7 trillion “Build Back Better Act” in December (E&E Daily, Dec. 21, 2021). He has since declared the bill “dead.”

There are ongoing discussions among Democrats about how to revive it in some form, but the January inflation numbers put a finer point on how difficult it could be to cobble together a politically palatable reconciliation package.

Asked about the bill yesterday, Manchin said Democrats should prioritize raising taxes on corporations — an idea that fellow moderate Sen. Kyrsten Sinema (D-Ariz.) has opposed. He also suggested the legislation would be better served going through hearings and markups in the Senate, a process that would take months.

“There’s a lot of good, good, well-intentioned ideas in there that we needed to tackle sooner or later,” Manchin said in an interview with Hoppy Kercheval of West Virginia MetroNews. “But the bottom line is right now we’re not in a financial position to do it.”

While he is not currently negotiating with the White House, Manchin has left open the door to a reconciliation package with a different structure and smaller price tag — or an independent climate bill. He said last month that the $555 billion in climate spending and clean energy tax credit expansions “is one that we probably can come to agreement much easier than anything else.”

Asked by E&E News yesterday when he would begin having conversations with colleagues on a stand-alone climate bill, Manchin underscored that dealing with inflation has to come first.

“Inflation’s the biggest thing right now,” he said. “Get our fiscal house in order; get a good tax plan.”

Asked if he imagined a climate package could then be considered after inflation eases, Manchin said they could all be moved “together.” He did not elaborate on what he meant.

Other Democrats, meanwhile, continue to insist that they can get something done. They argue that “Build Back Better” would help ease inflation because it is fully paid for and has an array of social spending provisions that could cut costs for consumers and help families pay for child care.

House Speaker Nancy Pelosi (D-Calif.) floated that line of thinking preemptively this week, telling colleagues in a letter the day before the consumer price numbers dropped that the bill would be “a crucial tool in the fight against inflation.”

Sen. Ben Cardin (D-Md.) acknowledged that Manchin is the most important audience for any argument to pass a version of “Build Back Better.”

“I know the realities of the politics here,” Cardin said in an interview yesterday. “But … these numbers to me just underscore the importance of passing it.”

The centerpiece of the House-passed bill’s climate provisions is some $320 billion in clean energy and electric vehicle tax incentives that promise to massively expand renewables deployment and accelerate an EV transition already underway in the private sector. It would likely be crucial to Biden’s pledge to halve U.S. greenhouse gas emissions by 2030.

Publicly, Manchin has not voiced much opposition to those provisions, despite quibbles about a proposed methane fee and a new tax incentive for union-made EVs that would benefit the big three U.S. automakers.

Cardin also said he’s holding out hope for both the methane fee and some form of carbon price. That latter idea is supported by top senators like Wyden but never made it into “Build Back Better.”

“There’s the potential of both the methane and carbon pricing to work out a proposal that could get 60 votes, so there are possibilities on both of those issues,” Cardin said. “There’s strong industry support for both methane and a carbon fee.”

But Democrats are currently exploring how to move the climate provisions from the “Build Back Better Act” in a package alongside policy proposals regarding child care and prescription drugs, said Sen. Tina Smith (D-Minn.), a top Senate climate hawk. She and some other Democrats remain broadly skeptical of separating climate from the social pieces of the bill.

Smith cautioned, however, that she is not aware of any formal conversations taking place about forging ahead on a scaled-back “Build Back Better Act,” describing discussions currently taking place as more “free-form.”

“I would characterize it as some one-on-one conversations to try to understand how we might pull it together,” said Smith. “I’m not aware of any organized ‘people in a room figuring it out,’ and that’s OK as far as I’m concerned.”

The extended absence of Sen. Ben Ray Luján (D-N.M.), as he recovers from a stroke, would make it impossible to pass a revised reconciliation bill soon, anyway.

“I wouldn’t say the urgency is gone, because there’s still a great amount of urgency,” Smith said. “It just means that there’s some sort of logistics we have to work through.”