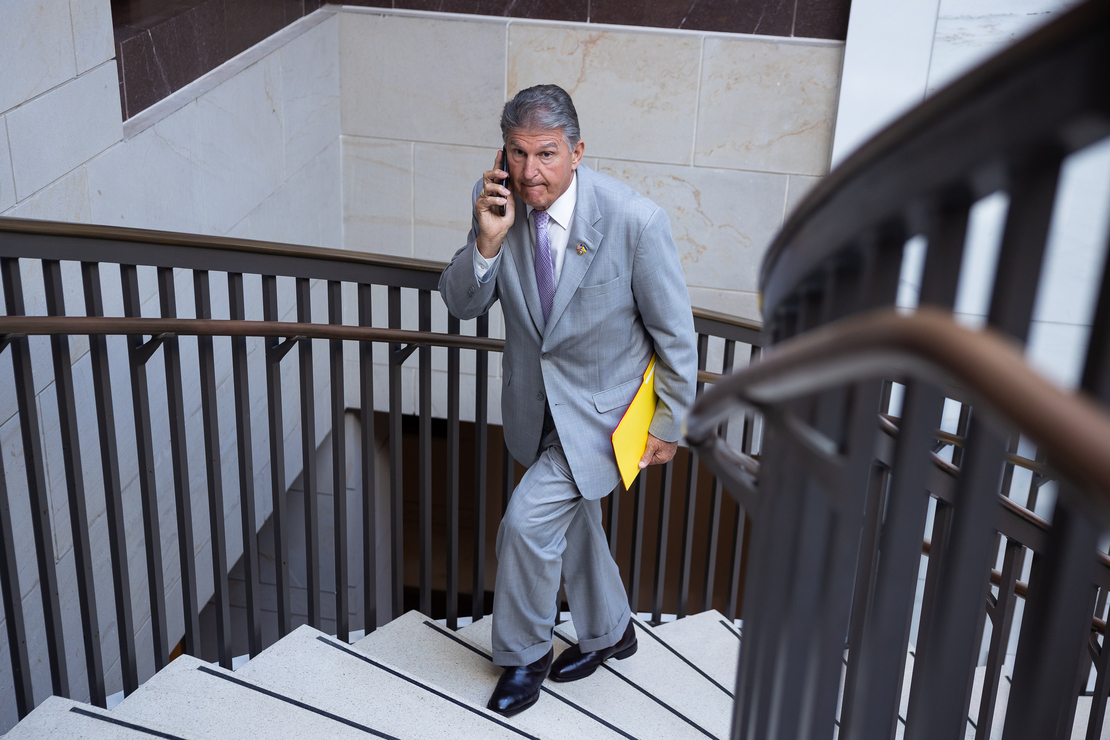 West Virginia Democratic Sen. Joe Manchin sounded a note of caution yesterday on reconciliation talks after another round of high inflation numbers, raising the prospect of a narrow package that only includes drug pricing provisions.

“It depends on if we can look at things and find a pathway forward that’s not [inflationary],” Manchin told reporters. “We know what we can pass. It’s basically the drug pricing on Medicare.”

The comments pointed to a possibility Manchin has floated before: dropping the clean energy and climate provisions from a potential party-line reconciliation bill (E&E Daily, May 26).

The West Virginia Democrat is still negotiating that section of the potential bill with Senate Majority Leader Chuck Schumer (D-N.Y.). But he has raised various concerns about electric vehicle incentives and a direct pay option for clean energy tax credits.

The reconciliation effort, namely the proposed suite of clean electricity tax credits, likely represents congressional Democrats’ last real chance to pass large-scale climate legislation in the near future and chip away at President Joe Biden’s emissions pledges. The GOP is favored to take back one or both chambers in the midterms.

At the same time, Democrats are attempting to break a blockade from Senate Republicans on a separate competition and innovation bill.

Senate Minority Leader Mitch McConnell (R-Ky.) had said he’d sink the bipartisan effort if Democrats continued to pursue reconciliation, but his stance has since softened. The administration is now urging Democrats to break up the innovation bill.

To date, Schumer and Manchin appear to have only fully agreed on the drug pricing aspect of the package, which Schumer sent to the parliamentarian for review last week. Manchin is also supportive of rolling back the 2017 GOP tax cuts, a priority he shares with many in his party.

But he reiterated that he wants to see 50 cents of every dollar raised via tax hikes in the bill go toward deficit reduction.

“I’m going to make sure that I have every input on scrubbing everything humanly possible that could be considered [inflationary],” Manchin said.

“No matter what spending aspirations some in Congress may have, it is clear to anyone who visits a grocery store or a gas station that we cannot add any more fuel to this inflation fire,” Manchin said in a separate statement yesterday.

Most Democrats argue that the reconciliation bill would be anti-inflationary, a point Senate Finance Chair Ron Wyden (D-Ore.) reiterated yesterday.

But Manchin has also been searching for concessions to boost fossil fuels amid concerns about energy prices, which remain high even as they have begun to decline this month.

Manchin is particularly keen to finish the Mountain Valley pipeline, the long-debated shale gas project that would run through his state.

The Washington Post reported yesterday that the White House is weighing whether to greenlight several public lands drilling projects, including Mountain Valley, the Willow Project in Alaska or in the Gulf of Mexico, to help secure his vote on the clean energy provisions in reconciliation.

That could rankle House progressives and environmental groups, who were already upset by the Biden administration’s move to advance the Willow Project over his first two years in office.

“I am really worried that in this rush to get something out we are not dealing with consequences,” House Natural Resources Chair Raúl Grijalva (D-Ariz.) said in an interview.

Grijalva said he’s worried that any approvals for energy projects would require carve-outs from the National Environmental Policy Act, which he said could set precedents for other exceptions.

“We make a lot of Faustian deals around here,” said Rep. Jared Huffman (D-Calif.), another progressive and member of the House Natural Resources Committee. “I think I am going to try to allow the space for the White House and hopefully some good environmental leaders in the Senate to bring forward a good deal.”

Members of the Alaska delegation have for years advocated for Willow, a ConocoPhillips Co. project that is projected to produce nearly 630 million barrels of crude oil. They remain on watch.

“I pitched the president directly on Willow last year to explain it, and after those guys looked at it, they said they were supportive,” Sen. Dan Sullivan (R-Alaska) said in an interview. “So the issue, in my view, is that decision was made a year ago.”

House moderates, meanwhile, are beginning to present another reconciliation wrinkle. Some are demanding a potential deal to raise the cap for state and local tax deductions, an idea that does not appear to be in the mix in talks between Manchin and Schumer.

Axios reported yesterday that Rep. Josh Gottheimer (D-N.J.) is considering putting together a group of lawmakers to make a counteroffer to Manchin and Schumer that would exclude new taxes on corporations and individuals and include less revenue.

Either issue has the potential to tank reconciliation talks because Democrats can only afford to lose only a handful of votes in the narrowly divided House and none in the 50-50 Senate.

Sen. Elizabeth Warren (D-Mass.) neatly summed up the situation in the Senate, as Democrats anxiously wait to find out whether Schumer and Manchin can strike a deal on other aspects of the bill.

“Reconciliation will be whatever we can get 50 votes for, and there’s no escaping that,” Warren told reporters.