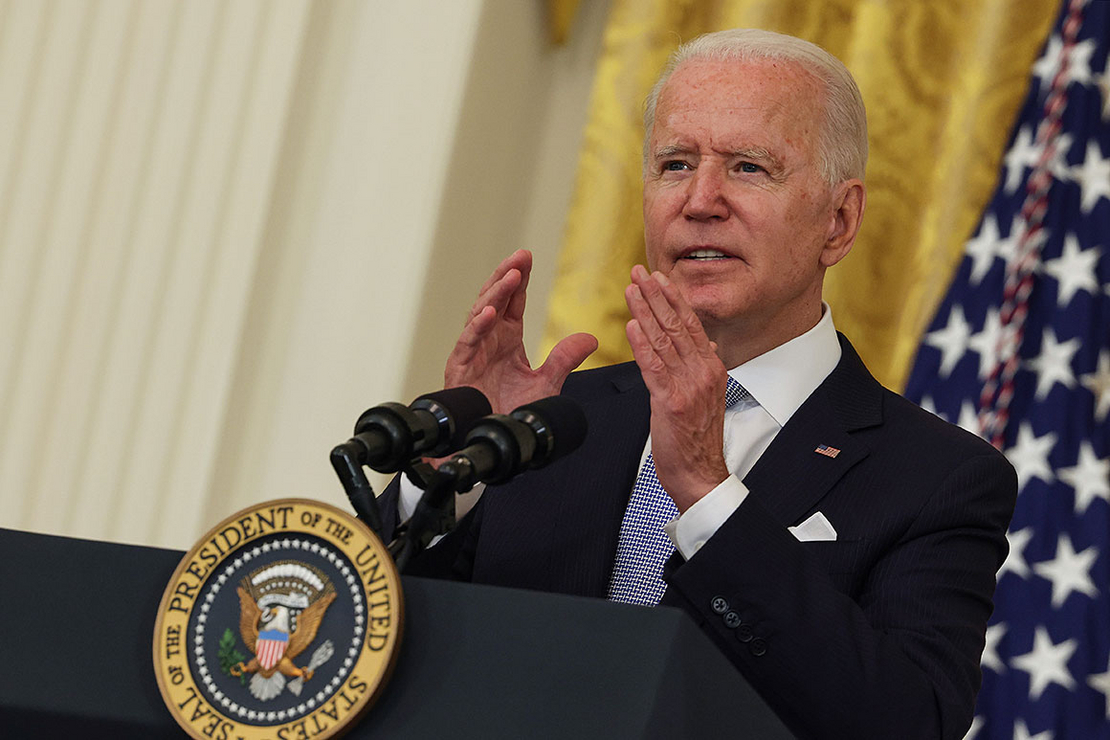 President Biden delivers remarks in the East Room of the White House on Thursday. The Biden administration is touting the bipartisan deal as the largest infrastructure investment in U.S. history, even as climate hawks warn that more is needed to meet the country’s climate targets. Anna Moneymaker/Getty Images

Both parties agree: Trees are infrastructure.

The bipartisan infrastructure deal moving through the Senate includes at least $5.75 billion for restoring, monitoring and researching forests, according to the legislative text and summary. Beyond money, the package also includes policies that could make it easier to prepare for wildfires.

That’s a significant slice of the deal’s $46 billion resilience spending, a total that remained near President Biden’s original proposal even as Republicans rejected most other climate money.

The forest funding is notable because GOP lawmakers spent months insisting they only would agree to fund “traditional” infrastructure, such as roads and bridges. More than once, negotiations teetered over how to define infrastructure. Republicans rejected things such as child care or electric vehicle subsidies as infrastructure.

Resilience money was championed early on by a Republican, Sen. Bill Cassidy of Louisiana. And many of the resilience measures were lifted from bipartisan bills. Some of its wildfire programs came from a bill originally co-sponsored by the lead Republican infrastructure negotiator, Sen. Rob Portman of Ohio.

That makes the bipartisan infrastructure deal the latest demonstration of the U.S. political system beginning to respond to the impacts of climate change — even as it struggles to curb its causes. Wildfires have become central to that new consensus, though some environmentalists worry the bipartisan battle against fire could overemphasize logging and blanket suppression.

Governors from both parties convened Friday at the White House for the second time this year to discuss wildfires. Biden said the bipartisan infrastructure deal would unlock important tools for responding to fires. But he pegged its long-term success to the parallel Democratic infrastructure bill that aims for deep emissions cuts.

“Wildfires are a problem for all of us, and we have to stay closely coordinated in doing everything we can for our people. That’s why I asked the governors to join us — Democrats and Republicans alike,” Biden said.

Forest management and community protection would get important boosts under the bipartisan bill, he said, but “overlaying all of this is the necessity to successfully confront climate change.”

“We can’t ignore how the overlapping and intertwined factors of extreme heat, prolonged drought and supercharged wildfire conditions are affecting the country," Biden said.

The bipartisan legislation would amend one of the federal government’s bedrock disaster laws, the Stafford Act, to allow pre-disaster mitigation grants to cover wildfire projects.

The bill also would beef up other funding streams to head off wildfires before they spark. It would authorize a new program of Community Wildfire Defense Grants, funded at $500 million over five years.

The Department of Agriculture would get $300 million for its Emergency Watershed Protection Program. (Wildfires can disrupt watersheds by causing mass erosion, among other things.) And $225 million would go to the Forest Service’s burned area rehabilitation program.

In addition, the Forest Service would get $100 million to build and decommission roadways into forest management projects.

NOAA would get $50 million for wildfire prediction, modeling and observation, along with $80 million for “research supercomputing infrastructure” for drought and wildfire forecasting. The departments of the Interior and Agriculture would also get $20 million to establish a program with NOAA that uses geostationary satellites to detect wildfire starts.

And Interior would get $50 million to establish a pilot program for local governments to use “slip-on tanker units” that can quickly convert a fleet of conventional government vehicles into fire engines.