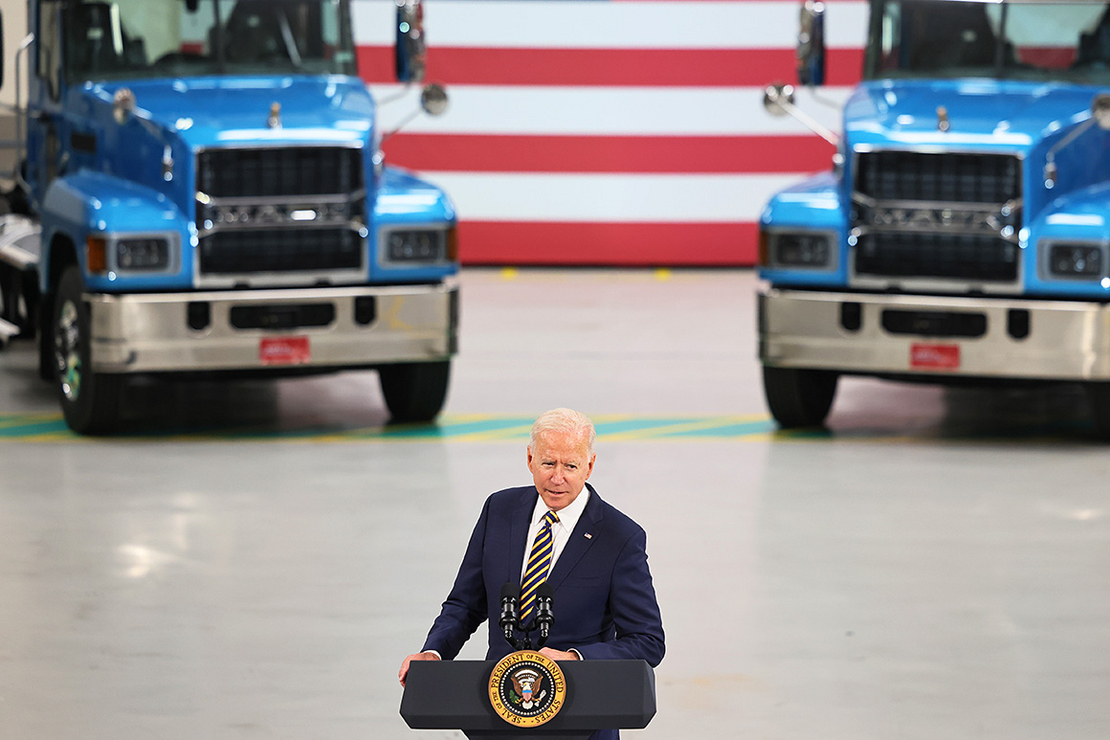 Billions of dollars in climate spending have been cut from the bipartisan infrastructure deal.

Public transit and electric vehicle spending could be roughly $20 billion lower under the infrastructure deal announced yesterday compared with the bipartisan framework that senators and the White House announced in June.

The Biden administration is touting the deal for $550 billion in new spending as the single largest infrastructure investment in U.S. history. But the lower funding levels could threaten President Biden’s goal of building a half-million charging stations, if not his larger ambition of cutting emissions in half by 2030 — the minimum that’s needed, scientists say, to maintain a safe climate.

It also ratchets up political pressure on Democrats. With virtually no margin for defections, the party faces internal divisions between progressives who are alarmed at the mounting scale of climate impacts and centrists who are wary of massive federal spending or are concerned about its potential effects on industry.

Electric school buses were trimmed to $2.5 billion. The June framework had called for $7.5 billion for “electric buses/transit,” according to a White House fact sheet. Now, the deal directs $2.5 billion of that money to “low-emissions” buses, and $2.5 billion of it to ferries (with some of that funding earmarked for Alaska).

Electric vehicle charging stations had their potential funding cut by about half.

Yesterday’s deal and the June framework called for the same amount of money dedicated to EV charging infrastructure, $7.5 billion.

But the White House had planned to use a new “Infrastructure Financing Authority” to tap another $7.5 billion for charging stations. That financing authority was dropped from the deal announced yesterday, leaving the administration without a ready replacement for the money.

That has thrown Biden’s electric vehicle plans into doubt. He had originally proposed $174 billion for his entire EV agenda, but the administration had said it could still hit his charger goal with the framework’s $15 billion (Climatewire, July 8).

The White House yesterday avoided mentioning the president’s goal of a half-million chargers, after making it a major selling point of the June framework.

“This is the first-ever national investment in EV charging infrastructure in the United States and is a critical element in the Biden-Harris Administration’s plan to accelerate the adoption of EVs to address the climate crisis and support domestic manufacturing jobs,” the White House said in a fact sheet detailing the deal.

Biden himself remained mum on his charging station goals — even as he spoke about the bipartisan infrastructure deal from a Pennsylvania factory that helps manufacture electric dump trucks.

“Right here, on this factory floor, you’re making a product that [is] fighting climate change,” BIden said yesterday. “Our manufacturing future, our economic future, our solutions to the climate crisis are all going to be made in America, creating good jobs. This is what it means to build back better.”

Progressives are threatening to sink the bipartisan deal unless Congress also passes multitrillion-dollar legislation for climate and social programs. Many had already written off the bipartisan deal’s potential for major decarbonization, because its passage relies on Republicans.

But a sense that climate has been shortchanged could lead progressives to seek even more funding for it in the Democratic spending bill, already pegged at $3.5 trillion. Meanwhile, centrists have balked at that price tag.

“Biden and Congress can’t get distracted by this pathetic version of an infrastructure package that only waters down much needed climate priorities, like transit, even further,” the Sunrise Movement’s advocacy director, Lauren Maunus, said in a statement.

The Democratic spending bill, she added, “must be strengthened to include priorities diluted by this bipartisan package.”

The bipartisan package cleared a key procedural hurdle in the Senate last night. The Democratic coalition has taken that as a signal that the fight over climate policy is about to escalate.

The League of Conservation Voters, which held a press conference with Democratic congressional leaders yesterday, urged lawmakers to pass policy that could actually meet the climate benchmarks set by scientists.

“It is clear that the deal does not meet the moment on climate or justice,” she said in a statement.