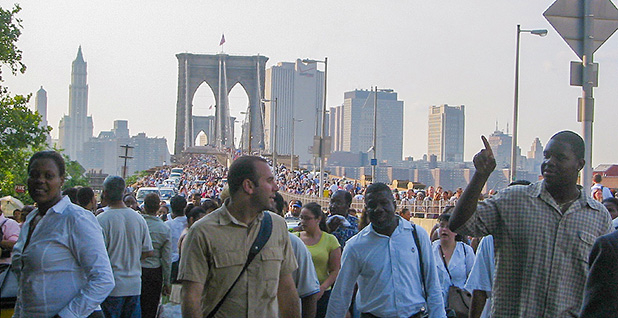 The White House's National Infrastructure Advisory Council is studying long-term power outages brought on by physical or cyberattacks. Pictured are people streaming out of Manhattan on foot during the 2003 Northeast blackout. Alex Lines/Flickr

The National Infrastructure Advisory Council, which consists of 20 executives from various industries, including energy, telecommunications and transportation, agreed to review the grid’s fuel supply chain as part of a wider study of catastrophic power outages due by the end of the year.

The council’s preliminary findings, based on interviews with 21 energy and emergency planning experts, feed into an ongoing debate over whether more U.S. power plants should be able to store fuel on-site, rather than counting on "just-in-time" deliveries from natural gas pipelines. The Trump administration has argued that the risk of an attack on gas infrastructure justifies bailing out coal and nuclear power plants on the verge of shutting down, according to a Department of Energy memo leaked earlier this month.

"The just-in-time delivery models that we’ve all gone to create a potential vulnerability for us during catastrophic power outages," said Jan Allman, president and CEO of the Marinette Marine Corp. and co-chair of the NIAC group that led the scoping study for this year’s in-depth review. "Loss of fuel can make a disaster considerably worse."

"The grid itself is transforming pretty rapidly," he said. "As we optimize the grid through the use of digital technologies, through the use of natural gas and renewables over transmission lines … if you don’t have redundancy, it’s a vulnerable system. So I do think we have to be sensitive to that."

The NIAC study will also explore the federal, state and local response to a long-term "catastrophic" power outage, defined as lasting weeks or months. "These are society-changing events," Allman said.

The group discussed lessons from the worst power outage in U.S. history — Hurricane Maria, which flattened Puerto Rico’s power grid. To this day, roughly 10,000 citizens on the island remain without electricity. In the weeks and months following the storm, many residents remained in the dark or relied on small power generators barged in from the mainland. The latter stopgap measure might not translate to the northeastern U.S., where the grid operator PJM Interconnection manages the flow of electricity for a population nearly 20 times the size of Puerto Rico’s.

"Sixty-three million people versus 3 million people is a big difference," Fowke said. "And that’s why we believe that the most important thing is getting the grid back up. It’s going to be very difficult to run PJM with generators."

To that end, the NIAC pledged to "examine where traditional response plans, resources, and mutual aid are exhausted," with an emphasis on "black start" resources needed to ramp the grid back up to normal operations.

The infrastructure advisory group will also look at the potential for planning "community enclaves" that centralize crucial backup resources in one area, heading off mass migrations that could make a long-term power outage more dangerous.

Several officials from the Department of Homeland Security and the White House National Security Council joined the NIAC meeting yesterday, including Chris Krebs, the newly confirmed undersecretary of DHS’s National Protection and Programs Directorate. The NPPD is the lead civilian office for defending federal and critical infrastructure networks from hacking threats.

Krebs urged the NIAC to examine the most important functions to protect from disruption.

"Is it transmission, is it distribution, is it generation? … What are we really worried about?" he asked. "And then a second question, which is summed up nicely in the scoping study: What are we going to do about it?"

Another DHS office, the Transportation Security Administration, is responsible for overseeing the cybersecurity of the nation’s oil and gas pipeline network.

Several lawmakers and energy officials have questioned whether TSA — and its limited staff of cyber specialists — is best-equipped to oversee gas companies that are increasingly essential to keeping the lights on in the U.S.

Krebs said on the sidelines of the NIAC meeting that he is "confident" in the way TSA is handling the threat with pipeline companies, while acknowledging that there is "room to improve."

"As the landscape stands now, we can, in my view, address risk within pipelines with natural gas or any other product that moves through that modality," he said.