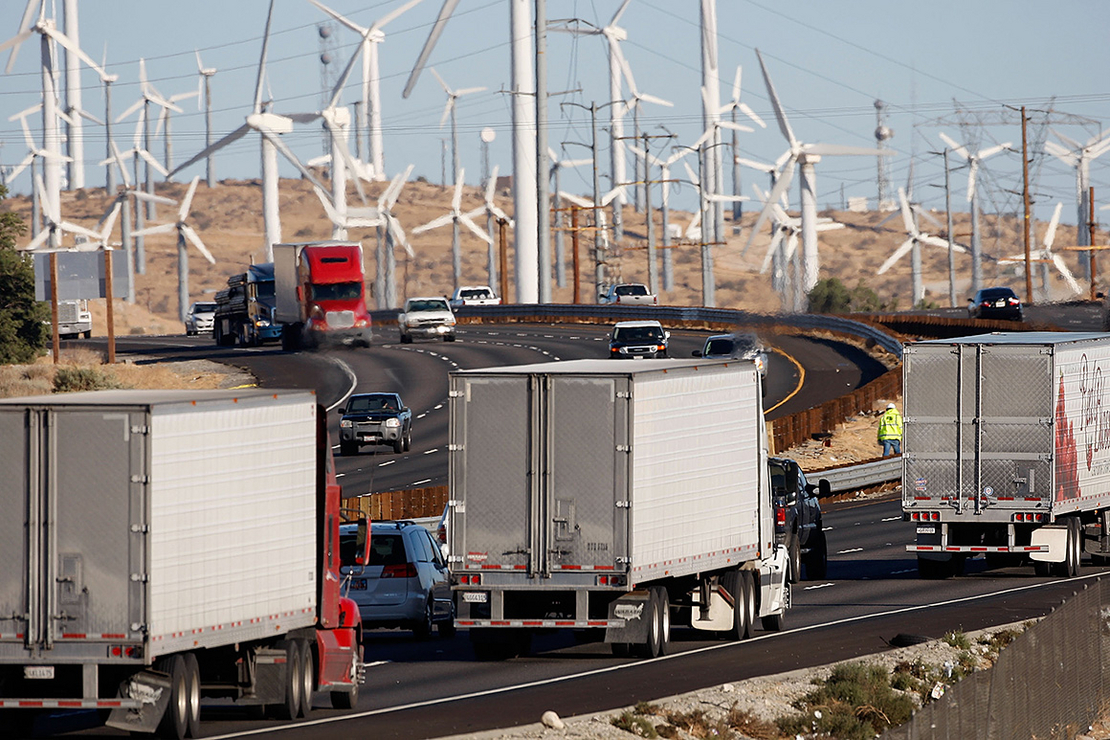 The bipartisan infrastructure package signed into law last month could lead to an increase in greenhouse gas emissions depending on how its transportation funding programs are implemented, according to a new analysis.

The $1.2 trillion Infrastructure Investment and Jobs Act contains provisions to advance electric vehicles, renewable energy, high-voltage power lines and carbon capture technologies. Supported by many clean energy groups and Democratic members of the Senate, the measure has been touted by the White House as a tool for reducing greenhouse gas emissions.

But the legislation’s surface transportation provisions could be used to expand highways or build new major roadways, potentially leading to higher emissions in the long term, according to a study from the nonpartisan Georgetown Climate Center. Whether or not emissions go up or down depends on how states, local planning agencies and the Department of Transportation ultimately allocate funds, the analysis found.

"We found IIJA could be an important part of the U.S. response to climate change. Or it could lead to more greenhouse gas pollution than the trajectory we are currently on," said researchers at the center, which is part of Georgetown Law, in a post about their findings.

The transportation sector is currently the largest source of greenhouse gas emissions nationwide, according to EPA. Altogether, the infrastructure act allocates about $599 billion for spending on "surface transportation," which includes highways, public transit, sidewalks, bike lanes, roads and related infrastructure, the researchers estimated.

But once federal dollars are distributed to states, state officials typically have flexibility in terms of how the funds can be used. As an example, the researchers note that the law will distribute $70 billion over the next five years to the Surface Transportation Block Grant (STBG) Program, which states can use to invest in mass transit and electric vehicle charging stations, but also for road and bridge construction projects.

By analyzing various options for spending the law’s funds, the researchers determined that emissions could dip below a business-as-usual scenario by 2023 if policymakers "prioritize low-carbon transportation strategies" and maintenance work for existing roads.

The report’s reference case assumes that the administration’s proposed corporate average fuel economy standards for cars and light-duty trucks built between 2024 and 2026 would be fully implemented and that the cost of EV batteries continues to decline.

However, if funds are instead used to expand highways, the law could have the opposite effect, increasing emissions by 1.6 percent relative to the baseline scenario by 2032, the analysis said. Emissions would increase because of a phenomenon known as "induced demand,” a concept referring to gradual increases in traffic volume that have been observed when new roads or lanes are built.

"In short, traffic expands to fill the new lanes within a few short years, bringing with it more pollution," the researchers said in their post.

The White House did not respond to a request for comment in time for publication.

Although the analysis highlights choices facing state and local entities as the law’s funds are appropriated, federal agencies can also influence how some of the money is used, said Deron Lovaas, a senior policy adviser at the Natural Resources Defense Council, who was not involved in the research. For example, guidance released by DOT last week seeks to encourage investments that align with the administration’s climate goals, Lovaas said.

Some states have also started to use federal transportation funds more creatively, rather than for highway expansions, Lovaas added. Still, highway expansion projects have accounted for about 15 percent of federal highway spending historically, said James Bradbury, the center’s mitigation program director and the lead researcher for the analysis.

"There are some encouraging signs, and a lot of states are eager for dedicated funding for low-carbon strategies, including transit and EV charging," Bradbury said in an email. "States are also starting to put proposed spending plans in front of stakeholders to get input on projects, so there are opportunities for residents and communities to let their states know what their needs and priorities are."

Overall, the analysis shows that the infrastructure law’s effects for greenhouse gas emissions remain "undetermined" as of now, Lovaas said.

"The outcomes and impacts of the bill are 100% about implementation," he said.