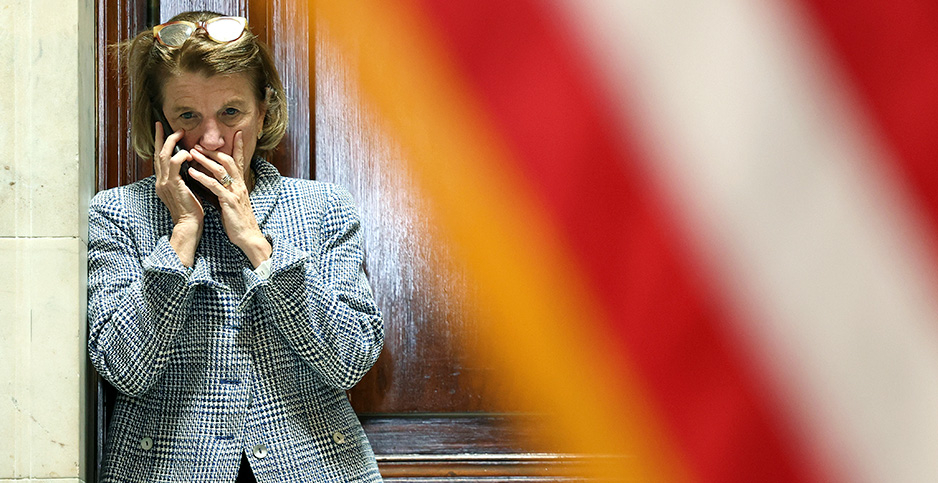 Sen. Shelley Moore Capito (R-W.Va.) talks on the phone inside the Capitol last month. Capito is a leading negotiator on infrastructure for her party. Kevin Dietsch/Getty Images

Frustration is creeping into President Biden’s own climate team as his bipartisan infrastructure talks plod past the White House’s initial deadline and into the summer.

Infrastructure negotiations continue today, after Biden on Friday rejected Senate Republicans’ offer of $307 billion in new spending, a $50 billion bump from their last offer. The president has offered to trim his proposal to $1 trillion, down from his initial $2.2 trillion.

Climate remains a major sticking point. Republicans are fighting to keep nearly all clean energy programs out of the package. The White House cited that approach as a reason to reject the latest GOP offer, though the administration insists a deal still is possible with more time.

"This [week] is not do or die," Commerce Secretary Gina Raimondo, one of the president’s infrastructure negotiators, said yesterday on ABC News.

"If someone told me two months ago that we would be talking to Republicans about a trillion-dollar-plus deal and still at the table, I’m not sure I would have believed you. "

But the Biden officials working on climate are starting to sound more impatient.

"Those are all infrastructure plays Republicans have voted for and talked about. It was in Biden’s plan. It’s not in theirs," Granholm said. "So it’s just curious why there isn’t more coming together."

Granholm accompanied Manchin last week on a trip to his state. She argued that Biden’s climate proposals would help West Virginia transition to a clean energy economy.

But Biden might have to continue bipartisan negotiations until Manchin is satisfied, she suggested.

"You would have to ask [Manchin] about where his bottom line is and how long we have to try to be able to get Republican support," Granholm said.

"We’re not that far apart," he said on Fox News. "People are continually trying to push us to more division. And I keep saying, let’s continue to keep working."

Charging stations only? ‘Not a good idea’

There’s one aberration to Republicans’ opposition to allowing any climate programs into an infrastructure package: electric vehicles.

But that might be an exception that proves the rule.

The lone decarbonization item to get money under the Republican proposal would be electric vehicle charging stations. But the GOP offer would be too small and too narrow to meaningfully bend U.S. emissions, some experts said.

That’s less than 3% of the $174 billion Biden has proposed for electric vehicles, including consumer incentives, manufacturing subsidies and electrifying the government fleet.

"Would $4 billion have a substantial impact on the transition to electric vehicles across the entire United States? Probably not," Scott Hardman of the University of California, Davis, Institute of Transportation Studies wrote in an email.

The consulting firm AlixPartners has estimated that by 2030, the U.S. electric charging station infrastructure would require about $50 billion.

The price of installing a charging station depends on a range of factors — including hardware, permitting and electrical grid capacity — making it difficult even for industry players to assess the cost of a charging network, according to a recent RMI study.

By comparison, he said, the United States has about 150,000 gas stations, each with multiple pumps.

"It’s a good start, but we’re going to need more," Samaras said of the $4 billion charging station proposal. "We’re at the early stages of a major transition to clean electric vehicles in the U.S., but we need a policy push to get things started. The huge scale of the challenge, and the opportunity, requires a proportional policy response."

Republicans say the private sector should spearhead the charging station build-out, so the GOP is proposing to cover only a fraction of the potential cost. And it might be even smaller than it seems.

The Republican package includes baseline spending, which would happen regardless of a bipartisan deal. So it’s not clear if the GOP is inflating its electric vehicle proposal by double-counting other spending. For instance, the bipartisan surface transportation bill moving through the Senate already includes $2.5 billion for charging and fueling infrastructure grants.

The partisan divisions go deeper than dollars. Republicans have ruled out any new subsidies for electric vehicles themselves.

With the U.S. electric vehicle market still in its infancy, though, some experts say that charging stations would have a smaller impact on transportation emissions than subsidizing the vehicles themselves.

Vehicle purchases are what will move automakers to ramp up production, spend more money on battery research and invest in supply chains, he said. Companies will do that more quickly if subsidies mitigate their risks.

That calculus is somewhat separate from charging infrastructure, Tal said. Range anxiety is a psychological obstacle to expanding the market, he said, but most vehicle trips are under 50 miles — well within current battery range.

In this market, he added, most electric vehicles are purchased by individuals who can charge them at home, or by companies or governments that can charge them off-hours in fleet storage.

Building out a charging network would help in the future, and the charging stations would get used, Tal added. It’s just a matter of prioritizing limited resources.

"Infrastructure is not a good idea" without subsidizing vehicles too, he said.