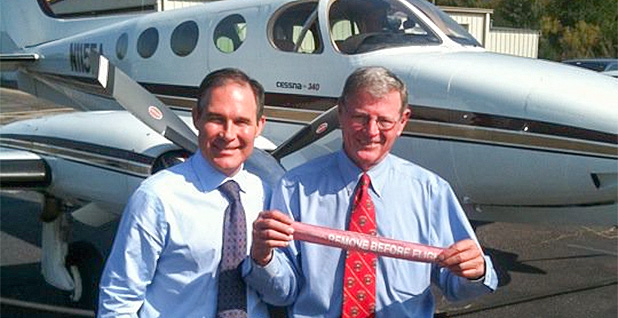 In an interview with E&E News and other media outlets in his office this morning, Inhofe pinned blame for Pruitt’s ethics scandals on California billionaire Tom Steyer, "disgruntled" former employees, the media and what he described as unprecedented security threats against the former Oklahoma attorney general.

"I’m a little embarrassed that I was beginning to doubt him in some areas where he shouldn’t have been doubted," Inhofe said, acknowledging that he was "getting concerned" about the steady stream of unflattering headlines about Pruitt, who is the subject of more than a dozen federal investigations.

Inhofe accused Steyer of funding attacks on Pruitt, apparently referencing the involvement of the Californian’s NextGen America in the "Boot Pruitt" campaign.

Inhofe also blamed "some disgruntled" former employees for roughly two-thirds of the accusations against Pruitt, who he said required unprecedented security costs.

However, Inhofe declined to elaborate on the threats "because I’m not allowed to" but said that Pruitt was "required" to be accompanied by security at all times. "He didn’t have a choice."

Recent EPA administrators have also faced threats during their time at the agency.

Gina McCarthy, Pruitt’s predecessor at EPA, received threatening messages during her tenure. In addition, a former employee who had threatened McCarthy was spotted outside EPA’s headquarters in Washington, D.C. That ex-employee was charged, but the case was later dismissed.

The EPA inspector general has opened more investigations into threats against Pruitt, but some observers questioned how serious those threats are. Pruitt’s security detail reported protesters who disrupted one of his speeches as a threat, but the EPA IG later determined that wasn’t the case (Greenwire, Jan. 23).

Inhofe said he took a list of six issues to discuss with Pruitt at the meeting, which he described as long. He declined to identify where it took place.

The allegations and responses, which Inhofe read from a two-page handout prepared by his staff, generally echoed EPA’s responses to the various scandals.

Asked why he stopped with the six lines of inquiry, Inhofe responded, "Because it was late."

"I didn’t really care to go any farther," the senator said.

Of allegations that Pruitt used his positions to enrich himself as the part owner of a minor league baseball team and a house near the state Capitol, Inhofe said, "There’s no value to it at all."

Pruitt "wasn’t involved in any of the negotiations to buy a home," Inhofe said.

Inhofe also defended Pruitt’s costly trips to Morocco and Italy as in line with similar expenses by his predecessor, McCarthy.

"It shows they’re both doing the same thing," he said, noting that Pruitt’s trip to Morocco was in line with his job requirement "to evaluate the chapters of the free-trade agreements that have to do with the environment."

Inhofe also rejected allegations that Pruitt used his influence to gain tickets to the Rose Bowl and a University of Kentucky basketball game, saying he paid for both tickets.

Inhofe pointed to EPA staff for the $43,000 expense of installing a soundproof booth in Pruitt’s office, which the senator said came about after White House staff urged him to get a secure line to converse with the president.

"The administration requested that capability for his office," Inhofe said. "The government bureaucracy, being what it is, should have made a lot better deal than they made, but that was done through government purchasing. The documentation about that is there."

The Government Accountability Office found that EPA violated appropriations law by not disclosing to lawmakers its spending on Pruitt’s phone booth (Greenwire, April 16).

Of security costs, Inhofe again repeated that what has been reported "is only a fraction of the threats" against Pruitt, while noting that the Occupy Wall Street movement had posted Pruitt’s home address in Tulsa, urging protesters with pitchforks to show up.

Travel and payroll costs for Pruitt’s security detail have come to about $3.5 million in his first year in office, a big spike in spending compared to his Obama-era predecessors.

Pruitt’s 24/7 security was at first requested as a temporary measure by Don Benton, EPA’s senior White House adviser who led Trump’s "beachhead" team. Benton cited the former employee threatening McCarthy as one of the reasons for the beefed-up presence (Greenwire, May 15).

Inhofe also criticized a New York Times report that suggested Pruitt used his influence to help his daughter McKenna get into law school. That story was later corrected when it became clear that Pruitt’s request for a friend to write a letter for recommendation occurred before Pruitt entered federal service.

That same article also said that EPA aides were tasked by Pruitt in helping to secure his daughter a White House internship. E&E News reported in April that EPA Chief of Staff Ryan Jackson also helped with that particular assignment (Greenwire, April 11).

Inhofe blamed the media for Pruitt’s woes, saying liberal reporters disagree with the policies his longtime friend is implementing at EPA. He also said that Pruitt does not believe that reporters fairly report his responses to inquiries.

However, EPA’s press shop is known to be antagonistic toward reporters. Earlier this month, agency spokesman Jahan Wilcox called a reporter for The Atlantic "a piece of trash" when she called to confirm that a top staffer was departing from EPA.

Still, Inhofe acknowledged that there were "probably" times when Pruitt displayed "questionable judgment."

"I have to say this about him, he sure didn’t know anything about Washington when he got here," he said of Pruitt.

Inhofe declined to comment on whether Pruitt discussed his standing with President Trump and said he has no idea whether Pruitt’s job is safe.

"We don’t have the most predictable president," he said. "Anything could happen; I have no reason to know if it will or won’t."