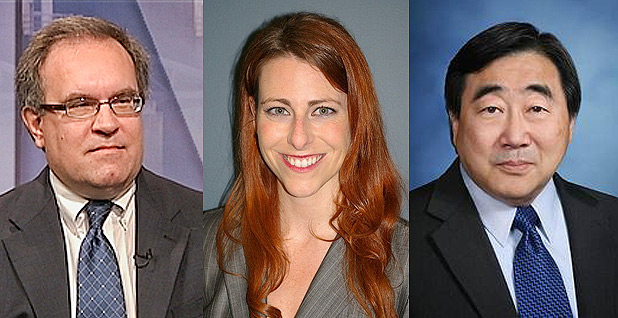 From left: Andrew Wheeler, Mandy Gunasekara and George Sugiyama. Sen. Jim Inhofe (R-Okla.) has long called for cuts to climate change funding. Now that many of his staffers are filling the ranks of U.S. EPA, those and other priorities could make it into the EPA budget. Photos courtesy of E&ETV, the National Association of Chemical Distributors and LinkedIn.

The former Senate Environment and Public Works Committee chairman could be well-positioned to see some of his environmental priorities come to fruition under the Trump administration. Not only are there a Republican in the White House and Republican majorities in both the House and Senate, but Inhofe also claims Pruitt as a close personal friend. Moreover, the senator’s former staffers are scattered across the Trump administration, including at EPA.

Ryan Jackson, a former staff director at the EPW Committee, is now Pruitt’s chief of staff. George Sugiyama, the panel’s former chief counsel, is a political staffer at EPA. And Andrew Wheeler, a longtime D.C. insider and Inhofe’s former chief counsel, is under consideration to be Pruitt’s deputy administrator (Greenwire, Feb. 27). This week, sources say, Mandy Gunasekara, majority counsel on the EPW Committee, is coming to the agency to serve as a senior policy adviser to the EPA administrator (Greenwire, March 13).

While it isn’t clear how much Inhofe or his former staffers will champion the Oklahoma lawmaker’s specific proposals — or even how much the administration will listen — Inhofe’s record could offer hints about the direction EPA will take in the coming years. Here are a few possibilities based on Inhofe’s budget priorities for EPA over the past decade:

By now, this one is somewhat obvious. Climate change has already been a major target under the Trump administration, with proposed budget cuts zeroing out funding for climate voluntary programs, including the popular Energy Star program (Climatewire, March 6).

Inhofe is well-known for his critiques of climate science, and his views seem to line up with those of the White House and the new EPA administrator. Last week, Pruitt even said he does not believe carbon dioxide is the main contributor to climate change.

Attacking climate change funding at EPA has been a longtime goal of Inhofe’s, and he has emphasized the need to return EPA to its core mission of protecting clean air and clean water, a talking point Pruitt has frequently repeated.

During last year’s budget hearing, Inhofe criticized the administration’s proposal to increase the agency’s budget by $87 million, which included more than $50 million in funding for implementing the Clean Power Plan.

"EPA has at times been distracted from fulfilling its core missions due to the Obama administration’s single-minded focus on remaking EPA into an agency that regulates climate change and the energy sector," Inhofe said.

The senator has suggested that the best approach to rolling back EPA’s greenhouse gas regulatory regime would be through the creation of an authorization bill like the "Energy Tax Prevention Act of 2011," which he brought to the Senate with Rep. Fred Upton (R-Mich.).

"This bill puts Congress in charge of deciding our nation’s climate change policy, not EPA bureaucrats. And it will keep our focus on reducing real pollution, ensure people have jobs and allow our economy to grow," Inhofe said at the time.

A similar bill sponsored by Rep. Gary Palmer (R-Ala.), the "Stopping EPA Overreach Act," has been introduced in the House.

Pruitt has stated that he would prioritize clean water as EPA administrator, and one way he might do that is by supporting the Clean Water State Revolving Fund, which helps states finance water quality infrastructure projects ranging from building municipal wastewater facilities to creating green infrastructure and protecting estuaries.

The fund has strong bipartisan support, including from Inhofe, who has mentioned its importance more than once during EPA’s annual budget hearings.

Inhofe has repeatedly pointed out that the fund is often a target for steep budget cuts that are then quickly reversed by Congress, so that few changes are actually made to EPA’s overall budget. During the budget proposal committee hearing for fiscal 2008, he noted that nearly $400 million of the $500 million in cuts to EPA’s budget came from the state revolving fund.

"My criticism is twofold: The programs are important and shouldn’t be cut, and the administration knows that in most cases, Congress won’t follow these cuts," Inhofe said.

Instead, Inhofe advocated getting rid of voluntary programs EPA had developed but that Congress had not authorized, as well as funding for international grants.

"While these programs may not add up to much money, they are a good starting point," Inhofe said.

Though Pruitt has shared few details about his plans for EPA so far, he has publicly expressed support for focusing attention on Superfund sites — uncontrolled or abandoned areas contaminated with toxic or hazardous substances, where the federal government is leading cleanup efforts. Last week, he also mentioned the need to remediate brownfield sites, contaminated properties where states or tribes typically lead cleanup.

That would come as no surprise to those who had followed Inhofe’s policies. During the George W. Bush and early Obama administrations, the Oklahoma senator repeatedly called remediation of the Tar Creek Superfund site in Oklahoma one of his top priorities. The site was contaminated with lead and zinc by mining companies.

Inhofe has also expressed support for brownfield cleanup. This, too, has bipartisan support but may be a significant target under the Trump administration. Jackson, Pruitt’s new chief of staff, also worked closely with the brownfields program, according to a former Capitol Hill staffer.

A leaked budget outline developed by the White House Office of Management and Budget suggests EPA should zero out funding for brownfield projects, a potential point of conflict with Inhofe’s environmental priorities.

The Oklahoma senator has a history of supporting clean diesel legislation. Most recently in 2016, he joined Sen. Tom Carper (D-Del.) in co-sponsoring the Diesel Emissions Reduction Act, which authorized EPA to provide grants, rebates or loans for retrofitting or replacing engines in diesel vehicles or fleets.

He has also supported clean diesel grant program funding in 2009, which "significantly improves air quality for a fraction of the cost of trying to achieve reductions through regulatory mandates."

One of the main pollutants from diesel engines is particulate matter, or soot, which is linked to a number of health problems, including respiratory and cardiovascular disease and premature death.

Inhofe has referred to particulate matter as "real pollution" as opposed to carbon dioxide, which he said is "not a pollutant — despite what EPA says."

He has called for an improved monitoring network for particulate matter, which would reduce "unnecessary burden on the regulated community" in addition to providing improved health benefits.

Late last year, Inhofe was among a bipartisan group of senators who sent a letter to the Trump transition team urging it to continue work on implementing the chemical safety reforms (E&E Daily, Dec. 1, 2016).