Inside a legal doctrine that could derail Biden climate regs 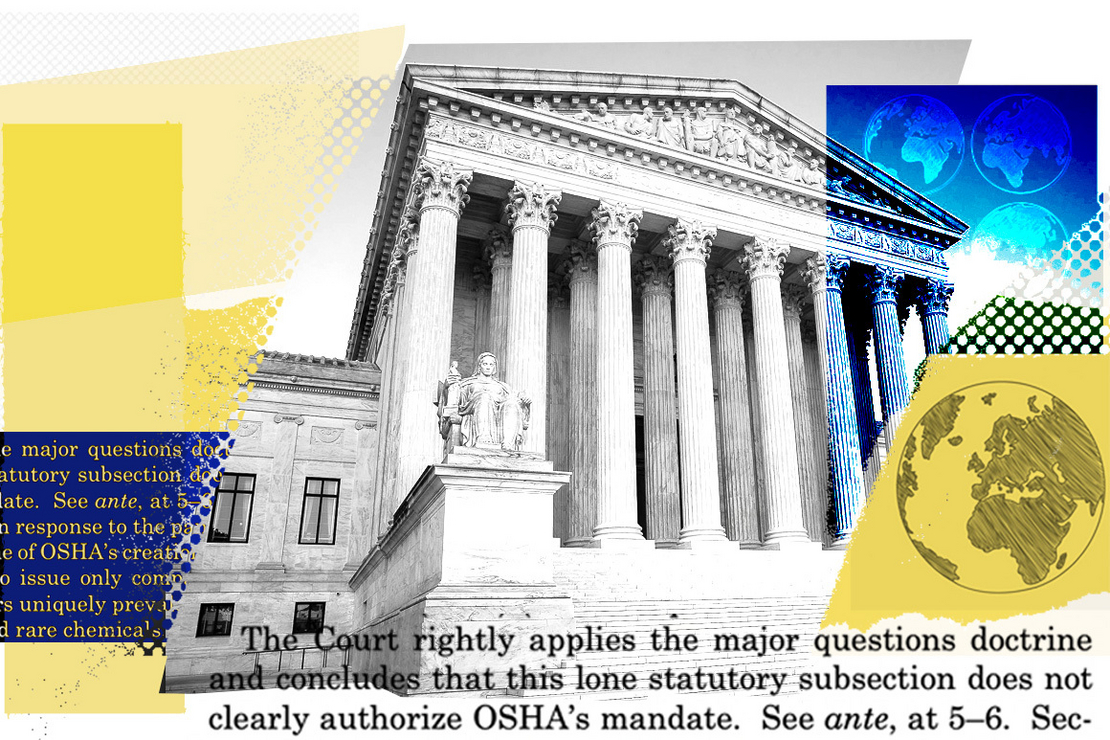 These are just three Biden-era regulations and policies subject to courtroom challenges driven by a long-dormant legal doctrine seen by conservatives as a winning argument against aggressive federal climate action.

“All the cool kids are now citing the major questions doctrine,” said Kevin Poloncarz, a partner at the firm Covington & Burling LLP, during a recent discussion hosted by the American Council on Renewable Energy.

The doctrine — which says Congress must speak clearly if it wishes to allow a federal agency to address matters of “vast economic and political significance” — has been invoked by Republican state attorneys general and conservative groups in challenges to EPA’s vehicle emissions rule and the social cost of carbon, a metric federal regulators use in cost-benefit analyses.

And during Feb. 28 oral arguments in the blockbuster Supreme Court climate case West Virginia v. EPA, the justices sought to understand how the doctrine might be applied in a challenge to emissions rules for existing power plants.

They took some of their cues from a friend of the court brief filed by the America First Policy Institute, a nonprofit founded by former Trump administration officials, that said the justices should take the opportunity to more clearly define the major questions doctrine.

“When it’s not possible for whatever reason to get major legislation, there’s a strong temptation to address those major questions instead through the pen and the phone,” said Jonathan Berry, a partner at the firm Boyden Gray & Associates, who authored the amicus brief.

The filing criticized a recent decision by the 6th U.S. Circuit Court of Appeals that briefly revived the Biden administration’s Covid-19 vaccine-or-test requirement for large employers. In that decision, the 6th Circuit referred to the major questions doctrine as “undefined” and “seldom used.”

The Supreme Court later reversed the 6th Circuit’s decision in an order that leaned heavily on the doctrine — raising concerns among environmental lawyers that the justices would embrace major questions challenges against EPA’s power plant rule and other climate regulations (Greenwire, Jan. 14).

The brief from the America First Policy Institute argues that EPA cannot impose rules — like the Obama-era Clean Power Plan — that would force an industry to shift to new technology and away from fossil fuels, rather than focusing on changes at individual power plants.

“There will be no shortage of opportunities for courts to develop the major questions doctrine further in the next few years,” said Berry. “It’s going to come up again and again.”

He continued: “Every pronouncement from the Supreme Court is likely an invitation for further challenges to extend and elaborate on the doctrine.”

Because Congress passed the nation’s biggest environmental laws decades ago, federal regulators are now left to squeeze meaning from statutory language that was written without a modern understanding of climate change.

“The version of the major questions doctrine that is currently being articulated is inherently deregulatory either in the sense that it would narrow the status quo of what agencies’ authority is or in that it might freeze agencies’ authority in time,” said Kirti Datla, director of strategic legal advocacy at Earthjustice.

She added: “Because it only has this one direction that it runs in, that’s why it’s so troubling.”

In earlier Supreme Court cases involving the major questions doctrine, Datla said, the justices’ language was “more like a confirmation of the court’s understanding of the statute.” She added that the agencies in those cases “were really doing something quite odd.”

Such an action was not a valid interpretation of the agency’s power to “modify” those requirements, the court found in the 1994 case.

That’s different from EPA regulating an issue that is very much in the agency’s lane, Datla said.

“Because this version of the doctrine is new, there’s so much room to describe it, say what triggers it, say how it applies,” she said. “There’s so much uncertainty.”

While the Supreme Court once appeared to see the major questions doctrine as an exception to Chevron deference — which gives agencies leeway to interpret ambiguous statutes — the justices now seem to see the approaches as separate, said Duke University law professor Jonathan Wiener during a recent discussion hosted by Resources for the Future.

“This major questions doctrine is being treated at least by advocates as a distinct limitation on Congress’ delegations to agencies — not only an exception to deference to agencies for ambiguity but even perhaps where the statute is clear,” Wiener said.

Berry of Boyden Gray said he sees the major questions doctrine as a threshold step to determining whether Chevron applies in the first place.

“If Congress has spoken clearly about the subject at issue, then the major questions doctrine doesn’t curtail regulation at all,” he said.

Recent challenges to the Biden administration’s fuel economy rule in the U.S. Court of Appeals for the District of Columbia Circuit appeared to lay the groundwork for the next round of major questions claims.

As in the Supreme Court power plant rule litigation, conservative challengers have asked the D.C. Circuit to stop EPA from curbing emissions to an extent that would transform the auto industry (E&E News PM, March 1).

“Major questions suggests there is a high bar that agencies have to meet to show that that’s what Congress intended them to do,” said Devin Watkins, an attorney for the Competitive Enterprise Institute, one of the groups challenging the vehicle emissions standards.

Anytime there is a standard that federal agencies are required to meet, Watkins said, “that’s something litigants are always going to talk about.”

When the D.C. Circuit last year upheld EPA’s authority to broadly regulate power plant emissions, a Trump-appointed judge laid the foundation for the Supreme Court to weigh in on the major questions doctrine.

In his dissent to the majority ruling that struck down the Trump administration’s Clean Power Plan replacement rule as too narrow, Judge Justin Walker said that his colleagues had allowed EPA to wring too much power from the Clean Air Act.

“I admit the Supreme Court has proceeded with baby steps toward a standard for its major-rules doctrine. But ‘big things have small beginnings,’” Walker wrote. “And even though its guidance has been neither sweeping nor precise, the Supreme Court has at least drawn this line in the sand: Either a statute clearly endorses a major rule, or there can be no major rule.”

While the D.C. Circuit ruling would have allowed the Biden administration to return to the Clean Power Plan, which required utilities to reduce emissions 32 percent by 2030, EPA said it planned to craft a brand-new rule. The power sector had already met the 2015 regulation’s goals more than a decade in advance, even though the rule never officially took effect.

But a coalition of red states and coal companies proceeded to petition the Supreme Court to overturn the ruling — even though no regulation is technically on the books.

To the surprise of many legal observers, the justices agreed, setting the stage for the Feb. 28 arguments in West Virginia v. EPA.

During the hearing, it was not clear whether a majority of the justices would get behind a ruling that used the major questions doctrine to cabin EPA’s Clean Air Act power (Greenwire, Feb. 28).

Justice Clarence Thomas, one of the Supreme Court’s six conservative members, asked the West Virginia solicitor general whether the state and coal company challengers needed the doctrine to win their case.

And Justice Amy Coney Barrett, another member of the conservative wing, questioned comparisons of the EPA carbon rule case to an earlier decision by the Supreme Court to overturn a Centers for Disease Control and Prevention eviction ban during the Covid-19 pandemic.

Unlike CDC in the prior case, EPA does have baseline authority to regulate greenhouse gas emissions as air pollutants under the Clean Air Act, Barrett said.

“That’s a little bit different than a mismatch between the subject of the regulation and what the agency does,” she said.

The justices are expected to decide the West Virginia case by early summer.

Even if the Supreme Court doesn’t touch the major questions doctrine in the EPA carbon rule fight, some lower courts have been eager to apply it in other cases.

A federal judge in Louisiana earlier this year blocked the Biden administration from using the social cost of greenhouse gases in its cost-benefit analyses to support regulations.

The Biden administration had restored the metric to Obama-era values on an interim basis after the Trump administration gutted the estimates, effectively devaluing strong climate regulations.

Judge James Cain Jr. of the U.S. District Court for the Western District of Louisiana was swayed by red states’ arguments that a more robust climate metric would result in ballooning regulatory costs.

“Courts have found that less costly and far-reaching regulations have triggered the major questions doctrine,” wrote Cain, a Trump appointee, in his Feb. 11 decision.

“In the hands of lower courts, there’s a risk that [the major questions doctrine will] be applied when it shouldn’t be applied,” said Sean Donahue of the firm Donahue, Goldberg & Littleton in the discussion hosted by the American Council on Renewable Energy.

He added: “Even where it’s corrected on appeal, it can slow down agencies’ ability to get their jobs done.”