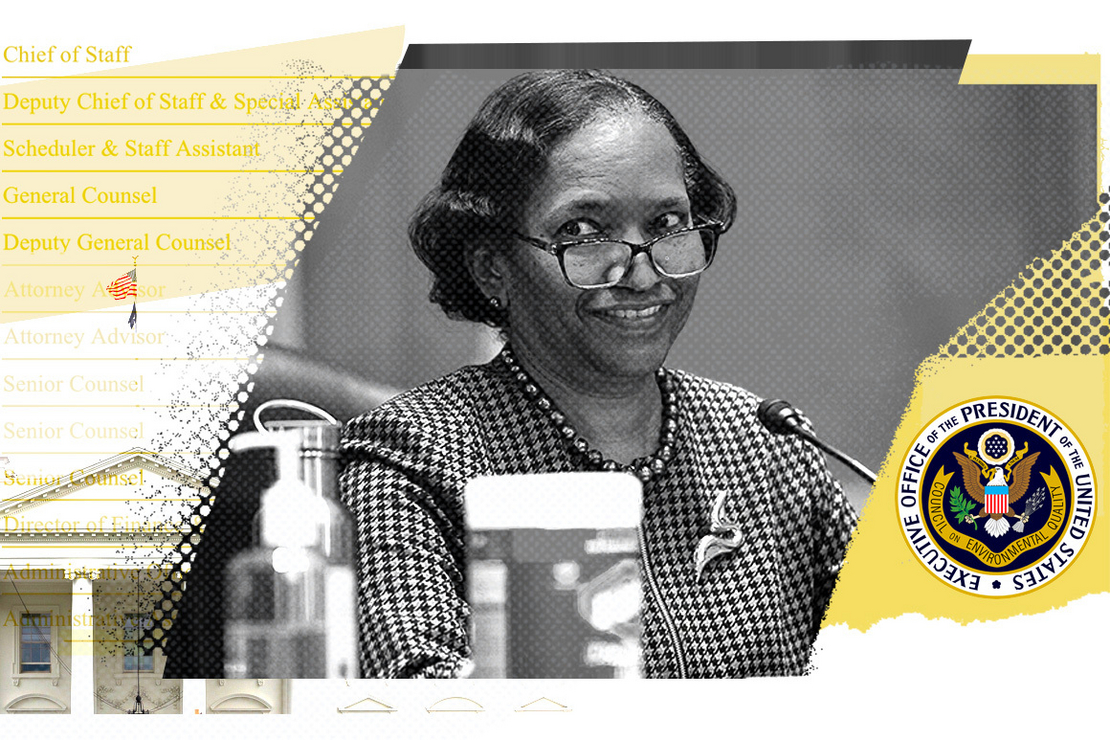 President Joe Biden has promised ambitious policies that promote renewable energy, advance environmental justice and slash greenhouse gas emissions. At the nexus of it all: a tiny environmental policy shop that Biden promised to elevate but remains woefully understaffed.

The Council on Environmental Quality is a Nixon-era office whose primary mandate is to oversee the National Environmental Policy Act, a 1969 law that requires federal agencies to blunt the environmental impacts of projects like building new highways, renewable energy projects on public lands and the construction of federal buildings.

CEQ’s staff largely operates out of the limelight, but a recent staff list and organizational chart offer new insight into the agency’s inner workings and policy priorities during the Biden administration. Most of the staff is broken down into teams that work on environmental justice, NEPA, conservation, climate change, engagement, and budget and administration. There’s also an office of the chief sustainability officer and the general counsel’s team.

The agency’s focus — and its influence in the White House — can change drastically depending on the administration and on who’s leading the agency.

“Each administration designs its policy offices to its own agenda and needs, and that tells you a lot about their priorities, about their management vision and about the potential effectiveness of what they’re trying to achieve,” said Jim Connaughton, who led CEQ during the George W. Bush administration.

Biden picked Brenda Mallory — a longtime EPA lawyer with expertise in everything from pesticides and hazardous waste to oceans and wetlands — to lead his CEQ. Mallory, the first Black council chair, was also CEQ’s general counsel during the Obama administration.

She and her small staff were handed some of the Biden administration’s biggest environmental priorities, including overhauling Trump-era changes to NEPA and following through on Biden’s ambitious environmental justice promises. The Biden administration has pledged to channel 40 percent of federal climate-related investments to disadvantaged communities and to track its progress with a new scorecard.

But CEQ has already fallen behind on multiple key goals, including the scorecard, which was supposed to be released two months ago, and the climate and economic screening tool, which was released in February in draft form after a six-month delay.

Mallory’s team is made up of 55 employees, according to a staff list that was current on April 4. They include veterans of the Obama administration, think tanks, Capitol Hill offices and cities. The majority of them are detailees, meaning they’re basically on loan from other federal agencies.

Mallory and some of her aides have offices in the Eisenhower Executive Office Building next to the West Wing; the bulk of CEQ’s staff works out of Jackson Place town homes on Lafayette Square.

Concerns about CEQ’s staffing and morale were amplified earlier this year when its top environmental justice official left about a year after Biden’s inauguration.

“I got dangerously close to burnout,” CEQ’s former director for environmental justice, Cecilia Martinez, told The Washington Post in January.

CEQ only had funding for 14 full-time employees during Biden’s first year in office, according to budget documents released by the White House.

The agency now has 17 dedicated staffers after the most recent government spending bill allowed the agency to increase its ranks to a total of 22 full-time staffers, an agency spokesperson told E&E News. Biden’s budget request for 2023 would keep that number at 22 (Greenwire, March 30).

“There’s no question in my mind that more staff will be incredibly helpful to CEQ in achieving their mission,” said David Kieve, who was CEQ’s public engagement director under Biden. The challenge for staff at CEQ and the climate policy office “is that they’re serving under a president who has made more robust commitments on climate than any president ever has.”

“Those commitments are appropriate and badly needed because our planet is melting and it’s melting rapidly. Everybody feels the pressure of the situation that we’re in and the need to act and act as quickly as we possibly can,” said Kieve, who left the Biden administration in January to serve as president of EDF Action, the advocacy arm of the Environmental Defense Fund.

Martinez told E&E News last week in an interview that she wants to see the new staff dedicated to CEQ’s environmental justice programs. “If those are for EJ positions, I think that’s excellent,” she said. “If not, they definitely need to build that in.” She also urged the Biden administration to keep hiring from outside of Washington in addition to veteran government officials.

“I would hate that we begin to see those people that are part of the Washington Beltway just kind of rotate positions around, because that doesn’t bring the energy and the innovation to what we need,” Martinez said. “I would hope that that’s a very cognizant part of how we build CEQ.”

CEQ intends to use its newly funded staff slots to hire a senior director for resilience on the climate team and to hire additional staffers to support environmental justice work, CEQ chief of staff Matt Lee-Ashley said in an interview.

“CEQ has been tasked with some responsibilities that are unprecedented,” Lee-Ashley said, including its new environmental justice portfolio and the implementation of the infrastructure law. That work comes on top of CEQ’s long-standing responsibilities under NEPA.

The agency also intends to hire a new senior director for environmental justice to replace Martinez and plans to have an announcement on that soon.

Two high-level CEQ staffers — Austin Brown, the senior director for transportation emissions, and Jane Flegal, the senior director for industrial emissions — were transferred over to the White House Office of Domestic Climate Policy led by Gina McCarthy last year. The shift was made because they were spending most of their time working with that office, but they continued to work with CEQ on climate change, according to CEQ. Flegal’s last day in the White House policy office was Friday, she said on Twitter.

Some environmental justice advocates think CEQ needs a dramatic staff influx to be able to keep up with the administration’s promises.

“I made a recommendation at the beginning that they needed to double or triple the size of CEQ with a strong focus of having enough folks to authentically do the work around environmental justice,” said Mustafa Santiago Ali, a former EPA environmental justice official who’s now at the National Wildlife Federation. “They’ve got to give the individuals the resources that they need as well and the power to be able to get this stuff done.”

Rachel Cleetus, policy director with the climate and energy program at the Union of Concerned Scientists, said CEQ has been “underresourced and understaffed to date” despite its role “in delivering on the Justice40 initiative of the Biden administration.”

“We have 23 people and are challenged to do what we need to do,” Shepard said. “CEQ has the tremendous responsibility of leading the work to operationalize environmental justice in the federal government with less staff than my organization.”