Inside DOE’s battle against the coronavirus 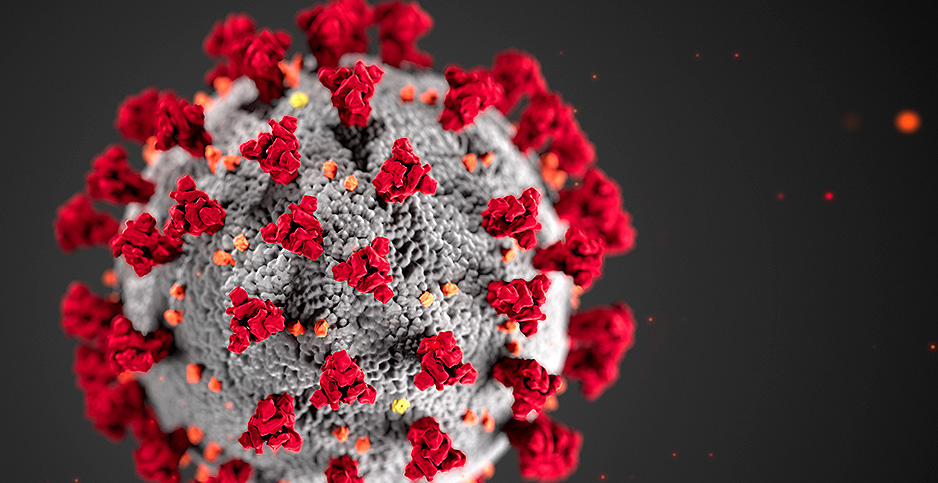 Spike proteins in red, jutting from the SARS-CoV-2 virus, are the leading edge of its attack. Centers for Disease Control and Prevention

First in a two-part series. Read the second part here

In a life-and-death race to stop the COVID-19 pandemic, teams of scientists across the United States are using the world’s fastest supercomputers, with software that can retarget on the fly, to find the molecular breakthrough that could become the drug with the best chance of disarming the insidious novel coronavirus.

The campaign is named the COVID-19 High Performance Computing Consortium, created in March by the Energy Department, the White House Office of Science and Technology Policy, and IBM Corp. (Energywire, March 25). It is channeling free use of prized supercomputers at seven DOE national laboratories to researchers at government, university and corporate labs who have proposed projects to combat the pandemic.

So far, 46 projects have been approved, based on the most advanced 21st century technologies including, in addition to high-speed computing, human genome research and 3D molecular models of the coronavirus with its ominous spikes.

"What we’ve done is basically open up a spigot on computing power to allow entrepreneurial endeavors from around the world to come and make use of it," said David Turek, vice president of high-performance computing at IBM, which brought the idea of the consortium to DOE, where it found an immediate home, he said.

The coronavirus investigation appears to be the most urgent, direct challenge put to the DOE national labs, whose roots go back to the World War II race to build the atomic bomb.

With deaths in the United States nearing 90,000 and the unemployment rate heading toward 20%, the recovery of the nation’s economy — and possibly the outcome of the 2020 presidential election — could hinge on the threat of a renewed COVID-19 outbreak and the availability of a drug to slow or stop it.

But there is still no date circled on official calendars for when drugs designed from the massive search may arrive. Nor is a sudden eureka moment expected, according to some scientists in the hunt.

Paul Dabbar, DOE undersecretary for science, who oversees the network of 17 national labs, described instead a tightening noose of scientific findings that have already shrunk the possible potential therapies from billions to handfuls.

"Clearly, we are extremely happy even though we’re not right now doing trial work," Dabbar said in an interview with E&E News.

The decision to move forward with any mass drug production will be with the manufacturers, Dabbar added.

The list of consortium projects suggests a campaign to surround the coronavirus, not only to understand its attack methods but also to learn how it evolves, how and why it spreads as it does, and how human genetic profiles may endanger some people more than others.

As of the start of this month, the projects were split roughly evenly between investigations of therapies for drugs for COVID-19 patients and vaccines to block the infection. The Coalition for Epidemic Preparedness Innovations last month reported 115 vaccine development projects, and some companies have started manufacturing experimental formulations to accelerate testing at the "warp speed" pace President Trump has promised for vaccine delivery. Still, a safe and effective vaccine may be 12 to 18 months away, according to Anthony Fauci, director of the National Institute of Allergy and Infectious Diseases.

The work so far has also generated some discouragement along with hopes.

One of the consortium projects is led by Mahmoud Moradi, an assistant professor at the University of Arkansas, whose work employs a process called molecular dynamics — creating a visualization of the coronavirus as it attacks cells.

"Based on our results so far, we are being very skeptical of the current structural picture that researchers are using to design drugs targeting the SARS-CoV-2 spike protein," Moradi said, referring to the full name of the virus that is driving the COVID-19 pandemic.

"This puts me on the pessimistic camp in terms of identifying really effective therapeutics. I believe we have to revise the structural picture before we make considerable progress. So in my humble opinion, I doubt if we have a really effective drug candidate targeting the spike protein within the next few months or so," Moradi said in an interview.

The consortium project’s results will be published by each researcher and shared with the world without charge.

"The ground rules are simple," Turek said. "Whatever we do, we do it for free. We make it easy to use and cast as wide a net as possible."

Computer time has been also donated by Google Cloud, IBM and others from among 11 of the nation’s largest technology companies in the project. The same number of universities have joined, along with computing centers at the National Science Foundation and NASA.

But the national labs are at the crux of the work.

Over the past 80 years, the labs’ resources have steadily expanded to reach their present size, with 20,000 engineers and scientists and a nearly $16 billion annual budget. An additional 50,000 scholars at all levels bring their research to the labs.

The labs have been given missions for healing, discovery and destruction, investigating cancer therapies and vaccines, environmental cleanup techniques, particle physics, electric car batteries, nuclear weapons, and scores of headline-grabbing innovations from inside the atom to the origins of the universe.

Their experts are rewriting the architecture of the 21st-century power grid, from advanced batteries and new nuclear reactor fuels to cybersecurity defenses and control room software.

Because of their expertise, the laboratories are constant targets of cybertheft, and that threat has extended to the search for coronavirus vaccines and therapies.

Last week, the FBI and the Cybersecurity and Infrastructure Security Agency issued an alert warning that hackers affiliated with the Chinese government are trying to steal protected data from U.S. coronavirus researchers.

"I’ll state the obvious. The DOE labs are always being hit" with cyber break-in attempts — that’s true of everything in the technology sector, Dabbar said.

"The reality is we’re very focused on security" because there is data at some of the labs that must be protected, he added. "Even though this is open science and will be published, there are certainly things we need to be careful about."

Underscoring the threat, several supercomputers in Europe being used to study COVID-19 were hacked last week, ZDNet reported, evidently as part of a cryptocurrency moneymaking scheme.

‘A lock and key metaphor’

The current trials of potential vaccines and therapies have started with off-the-shelf candidates with the hope of landing on one that works.

Rather than hope, consortium participants said their strategy relies on the most powerful computation and self-learning software to find the right answer.

The supercomputers in the project are led by the IBM Summit machine at the Oak Ridge National Laboratory, rated as the world’s fastest, with an incomprehensible top speed of 200,000 trillion calculations per second.

Speed is essential, Turek said. "How many molecules are there that one can look at" to find a knockout anti-virus drug? "The answer is in the billions."

"It’s sort of a lock and key metaphor," Turek said. The searchers must find the exact molecular key used by SARS-CoV-2 to open the door to human organs in order to launch the COVID-19 infection.

The virus’s skeleton keys are the knobby spike proteins jutting from its surface. The locks are unique receptor cells on the surface of human cells.

Find the key, and it becomes possible to stimulate a COVID-19 victim’s immune system to manufacture antibodies — defender proteins — with look-alike cellular "locks" that the coronavirus will bind to instead of human cells, neutering the attacker.

But the right key is somewhere in a drawer with a billion different keys.

"Our primary efforts have been identification — narrowing down the very large number of options … to a much smaller set of them that have a high degree of probability of working," Dabbar said.

He said the end result will be a small group of molecule clusters that should be pushed into trials that would qualify them as drug therapies. The project can also speed up evaluations of drug candidates that are already undergoing trials for their effectiveness on patients with COVID-19.

"With a greater degree of confidence that it’s working or it’s going to work, you might decide to put dollars into setting up production lines" sooner rather than later, Dabbar said. "There’s great value in that."

"The great part of that approach is, if we can design the antibody to bind to this key location of the [virus] spike protein, we can be fairly confident it will be effective," said Daniel Faissol, a data scientist in the Lawrence Livermore National Laboratory’s Computational Engineering Division, which jumped into the coronavirus fight before the consortium was formed.

Before high-performance computing analysis, "we would do an experiment to make that antibody and see if it bonds to the virus and neutralizes it. Those tests take a long time and are very expensive," Faissol said.

Now the lab uses machine learning to guide the search, he said. The technology proposes new designs for possible defender proteins that are then evaluated using computational tools that estimate how effectively the mutation would bind to the coronavirus.

At Oak Ridge, scientists began with 8,000 known protein molecule structures that appeared most promising, based on prior coronavirus outbreaks. Its supercomputer analysis shrank that number to 77 front-runners.

But finding a molecule that will bind to the coronavirus doesn’t end the hunt, Turek said. That only leads to the next challenge of understanding what happens when the virus gets loose in people.

"Oncologists say they can cure any cancer in the lab. The problem is when you get it out of the lab," Turek said. Then the problem becomes tremendously more complex.

"You have just a ton of additional questions that have to be ascertained," he said. One way to do that is to add more and more detail into the computer investigation of candidates, considering not only the virus but the human environment in the fight against the infection. Eventually, "77 becomes 50, becomes 20, becomes 10," Turek said.

"It’s a process of continuous refining based on new insight, new information," he added.

The search is likely to break records in terms of results in fighting new coronavirus pandemics, he and other scientists agree. But will it be fast enough?