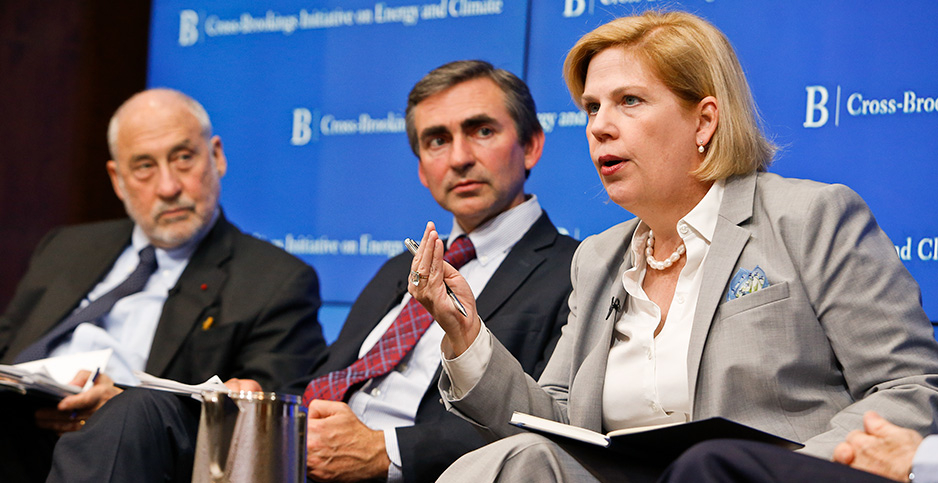 Economist Adele Morris speaking about carbon pricing at a 2017 event hosted by the Cross-Brookings Initiative on Energy and Climate. Paul Morgi/Brookings Institution/Flickr

If carbon taxes had a godmother, her name might be Adele Morris.

The Princeton University-educated economist has worked on the issue of climate change for more than two decades — both inside and outside the government — and much of that time has been consumed by the wonkiest of possible responses: carbon pricing.

The latest example came last Thursday when the Brookings Institution — Morris’ shop since 2008 — hosted an hourlong conversation with Sen. Chris Coons (D-Del.) and Rep. Francis Rooney (R-Fla.) about their proposals to impose a fee on carbon emissions.

The most telling moment came at the end, though, as everyone was checking their phones and getting ready to leave. Coons, who is preparing to release his latest carbon tax bill, offered one final thought to Morris, who moderated the discussion.

"Thank you to Brookings for being engaged — not just in good policymaking, but [for] 20 years of thorough and disciplined and detailed research on carbon pricing," he said. "Let us all recommit ourselves to not being here 20 years from now talking about good policy and theory."

For years, the idea of carbon pricing has been stuck in a D.C. kind of limbo. The proposal has plenty of support from think tanks and activist groups — but few concrete Capitol Hill wins.

The most visible sign of progress in recent years has been the proliferation of new groups advocating for a price on carbon emissions. Those include Americans for Carbon Dividends, the Alliance for Market Solutions and the Climate Leadership Council (Climatewire, June 21, 2018).

"For people like me in [the] analysis and research community, there is a lot of interest in this issue," Morris said in an interview.

But none of them expects to pass a carbon tax while President Trump is in the White House. And even if Trump is voted out in 2020, the prospects are far from certain.

Yesterday, just days after the Brookings event, the Competitive Enterprise Institute — a group that prides itself as an entity that "questions global warming alarmism" — hosted its own forum on Capitol Hill called "The Case Against Carbon Taxes."

All of this puts the carbon price crowd in a strange place. Despite the unprecedented attention now being paid to climate change — including among some on the right — the idea still is struggling to build momentum.

Whether that situation changes could go a long way in determining the kind of federal response the United States musters in response to climate change — if it manages one at all.

Morris, for her part, remains upbeat.

"I think the idea of carbon pricing is really gaining," she said. "It’s being incorporated into the discussion of what needs to be done, and I think that’s progress."

Morris certainly has perspective. She started on climate policy in 1997 as an environmental economist with the White House Council of Economic Advisers.

Her work with the Clinton administration coincided with the development of the Kyoto Protocol, one of the first global agreements on climate change. It was during those discussions that talk of an international cap-and-trade system began to emerge.

In the policy world, cap and trade is a kissing cousin to carbon taxes. Both seek to reduce carbon emissions.

Cap and trade does it by setting limits on carbon emissions and then developing a system in which higher-emitting companies or countries can barter with lower-emitting ones to exceed that cap.

Carbon taxes, meanwhile, look to place an increasing fee on emissions. The idea is to make it economically untenable to keep pumping greenhouse gases into the atmosphere.

Even in the 1990s, Morris said it was a challenge to build support for these ideas, as well as for the Kyoto Protocol itself. She said federal lawmakers fought efforts to put in place Kyoto domestically — a harbinger to President George W. Bush undercutting the deal in 2001 (E&E Daily, March 29, 2001).

"Basically Congress was endeavoring quite a bit to thwart the activities of the [Clinton] administration," she said.

Prospects for carbon pricing didn’t improve until 2009, when Democrats were in control of both chambers of Congress and the White House. Lawmakers led by then-Reps. Henry Waxman (D-Calif.) and Ed Markey (D-Mass.) managed to muscle cap-and-trade legislation through the House, but the bill never came up for a vote in the Senate and died on the vine.

Since then, the idea of carbon pricing largely has stalled at the federal level. While some states and regions over the years have put in place local versions of cap and trade — notably the Regional Greenhouse Gas Initiative in the Northeast — it hasn’t advanced much on Capitol Hill.

But neither has any other far-reaching climate legislation, Morris argued.

There have been some signs lately of growing interest in the idea, even if there’s not a clear legislative path forward.

Last year, then-Rep. Carlos Curbelo (R-Fla.) — who lost his congressional seat in the midterm elections — became the first Republican lawmaker in roughly a decade to introduce a carbon tax bill. Had it passed, his measure would have put a $24-per-ton tax on carbon and directed much of the revenue to the Highway Trust Fund (Greenwire, July 23, 2018).

Appearing at the Brookings event, Coons said his version, which has yet to be unveiled, would use "significant pieces" of the revenue raised from a carbon tax and "invest it in infrastructure construction and clean energy [research and development]."

But he expected that support in the Senate, at least for now, would come only from Democrats.

Rooney, who appeared alongside Coons, is the rare Republican to get behind a carbon tax bill. The measure he’s co-sponsored would impose a $15-per-ton tax on carbon emissions that would increase $10 annually. The resulting revenue would be sent back to taxpayers.

But as of yesterday, Rooney was the only Republican co-sponsor. The fact hasn’t escaped him.

"The irony — which I try to tell my colleagues on the Republican side of things — is the counties and cities that are going to pay the highest price for inaction [on climate change] are ours, the red ones," he said.

The reluctance comes despite efforts by outside groups to gin up support.

The activist group Citizens’ Climate Lobby, which supports a tax on carbon emissions, blitzed the Hill recently with hundreds of volunteers in support of the Rooney bill. The organization said the effort resulted in meetings with 529 congressional offices — but no additional GOP backers.

The Climate Leadership Council — whose members include energy companies such as Exxon Mobil Corp., Royal Dutch Shell PLC and BP PLC — has its own version backed by Republican elder statesmen James Baker and George Shultz. That one would start with a $40-per-ton fee on carbon emissions and — like the Rooney bill — send the proceeds back to taxpayers.

Finally, the Alliance for Market Solutions, another conservative-leaning group, released a study last year arguing that revenue from a carbon tax could help boost U.S. finances, such as permanently extending the tax cuts passed by Republicans in 2017 (Climatewire, Oct. 18, 2018).

He said it’s positive that Republicans have started to talk more about climate change but warned it’s going to take time for them to coalesce around responses.

"Republicans who now acknowledge climate change are at the beginning of working to identify solutions," he said. "There’s not a simple answer that’s been hiding. There are difficult solutions that require political consensus."

Flint added that it’s his belief that a carbon tax ultimately will be the winner because of its ability to address both climate change and the federal government’s long-term fiscal health.

"While climate change is an immense issue, there is another issue that will also drive climate change policy in the coming decade: the fact that our country is facing $1 trillion/year deficits on $3.5 trillion in annual tax revenue," Flint wrote in an email. "It’s why we’ve taken on this heavy lift of convincing Republicans to address climate change with a revenue-neutral carbon tax."

There was optimism among some advocates that Republicans might be convinced to move toward carbon taxes in response to the Green New Deal. But so far there’s been little evidence of much movement, as the Republicans who do talk about climate change recently have touted investment in carbon-fighting technologies, such as carbon capture.

"We believe that the key to successfully tackling climate change is American innovation," Rep. Kevin Brady (R-Texas) said at a recent hearing of the House Ways and Means Committee.

He added, "We believe a carbon tax is not the solution to address our environmental challenges."

Some Democrats, too, have dialed back their enthusiasm. After campaigning hard on carbon taxes in 2016, Sen. Bernie Sanders (I-Vt.) has adjusted his message for his 2020 presidential run to focus more on the Green New Deal (Climatewire, June 3).

Nor is he alone. With a few exceptions, the 2020 Democratic candidates for president are much more likely to talk about the Paris climate accord or the Green New Deal than carbon taxes.

"I think what’s happening is that people are really trying to understand the exigency of the climate issue," Morris said. "And they are afraid a carbon tax by itself isn’t going to cut it. So they are interested in a whole suite of policies."

But she said she plans to keep fighting.

"I could be working on a million other issues. But I remain convinced climate change is a defining challenge [for] our time," she said. "And I have decided that I have a role to play and it’s a role I want to play."