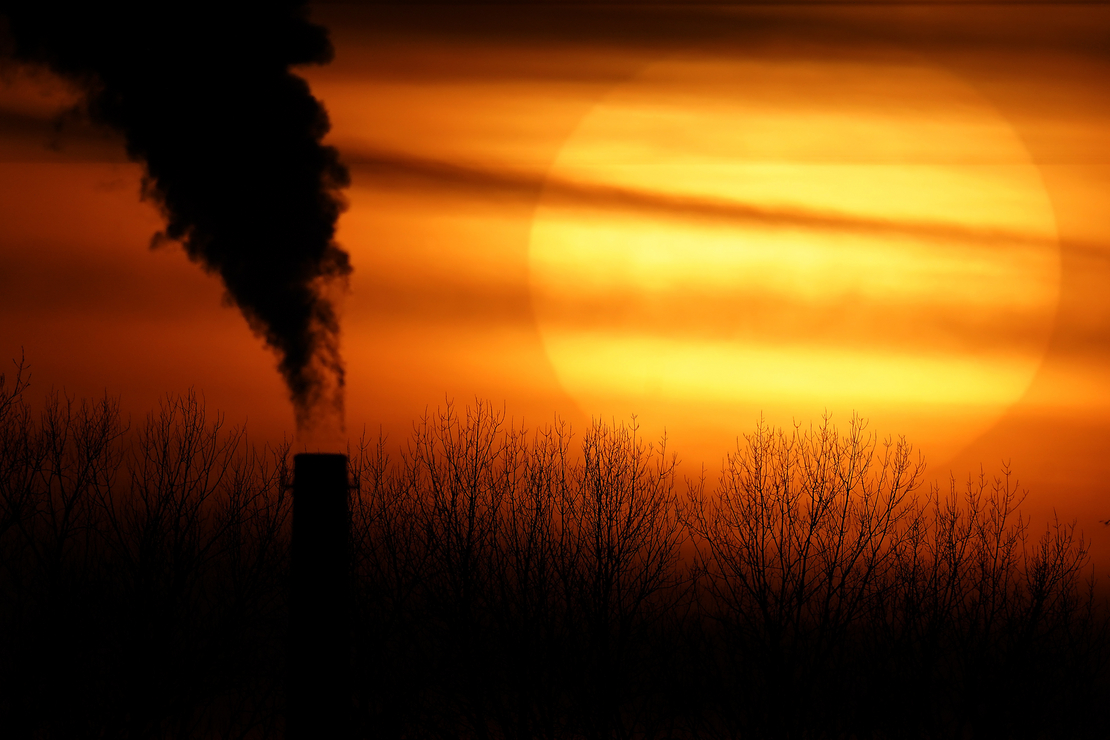 Emissions from a coal-fired power plant are silhouetted against the setting sun. Charlie Riedel/AP Photo

In early February 2021, senior EPA appointees briefed White House officials on a strategy that would tap a variety of statutes and programs to cut power plant emissions of greenhouse gases and hazardous air pollutants, curb toxic water discharges, and address the massive amounts of coal ash piled up in landfills and storage ponds around the country, according to a slide deck prepared for the meeting.

Should Republicans retake control of one or both chambers of Congress in next month’s midterm elections, that blueprint could attract fresh scrutiny. GOP lawmakers have accused the administration of a bias against coal-fired electricity generation and are eager for oversight of EPA.

Titled “Power Sector Strategy: Climate, Public Health, Environmental Justice. The Building Blocks,” the slide deck leads off with the declaration that “EPA has responsibility across multiple media to address environmental effects of the power sector.” It then alludes to more than a half-dozen routes for proceeding, including the agency’s air toxics and greenhouse gas standards, effluent limitation guidelines and coal ash disposal requirements.

It notes that some options were national in scope, while others — such as regional haze reduction curbs, which generally target older coal-fired power plants — would cover only “a subset” of generating units. The deck also references a Clean Air Act provision that EPA sought to use to prod utilities to move away from coal as a fuel source, only to hit a roadblock this summer at the Supreme Court (Climatewire, July 1).

While EPA Administrator Michael Regan in March maintained that the power sector was already headed in the direction embedded in EPA’s strategy, the agency’s coordinated approach was also seen in some circles as a fallback in anticipation of the high court’s 6-3 ruling in the case known as West Virginia v. EPA.

As the effects of climate change become increasingly severe, power plants are the nation’s second-largest source of heat-trapping greenhouse gas releases, ranking behind only the transportation sector.

At the Feb. 4, 2021, meeting, EPA Chief of Staff Dan Utech and acting air office head Joe Goffman were listed as attendees, according to Goffman’s calendar. For the White House, then-national climate adviser Gina McCarthy; her then-deputy Ali Zaidi; Maggie Thomas, the climate office’s chief of staff; and Sonia Aggarwal, a climate policy adviser, were included among the attendees.

“Dan and Joe, We would like to schedule a 60-minute discussion on the power sector for Thursday or Friday,” the calendar entry said, adding “Topics to cover” included criteria pollutants, effluent limitation guidelines, coal ash and Section 111(b) of the Clean Air Act.

The calendar entry listed a PowerPoint presentation as an attachment. E&E News filed a Freedom of Information Act request for the document, named “EGU strategy — v4,” and obtained the slide deck in response from EPA.

How the agency specifically proposed to pursue the options outlined in the slide deck is left unclear. The bulk of the presentation was redacted under a FOIA exemption that allows agency employees to shield internal deliberations from public disclosure.

Working ‘in partnership with Congress’?

Sen. Shelley Moore Capito (R-W.Va.), ranking member on the Environment and Public Works Committee, has also sought the slide deck. In the “Questions for the Record” for Goffman’s Senate confirmation hearing earlier this year, she asked him to provide the PowerPoint presentation and all other documents shared with White House staff in developing the “EGU strategy” — EGU short for electric generating units or power plants.

“As the Agency engages in the rulemaking process, it is inappropriate for us to comment or share internal deliberative materials that are under development,” Goffman said.

Peter Hoffman, a Capito spokesperson, told E&E News that EPA shared the slide deck with the senator in June, though only after the agency said it had been produced for FOIA.

Hoffman also said Capito is very concerned about EPA’s power sector strategy and referred to a Feb. 8 letter the senator had sent to Regan.

“Despite promises to be transparent and ‘work in partnership with Congress,’ EPA appears to be planning to use overly expansive interpretations of several federal environmental statutes to target affordable, reliable sources of electricity generation,” Capito said in the letter. “Even more concerning, many of the tools the Administration would potentially use would be for purposes not defined or even mentioned in their respective statutes.”

Also unclear is whether the approach outlined in early 2021 has since undergone any significant changes.

Goffman referred questions on that score and other points to EPA’s press office. In a statement, spokesperson Tim Carroll did not provide specific answers, but said that Biden “from day one” had “promised bold action to combat the climate crisis, protect people’s health, and deliver economic benefits for all. EPA is delivering on this commitment and moving forward with the urgency that the climate crisis demands.”

McCarthy, who stepped down from her White House post last month, could not be reached for comment. A White House climate office spokesperson declined to comment when contacted for this story.

Officials at the Edison Electric Institute, a utility trade group, have not seen the slide deck, spokesperson Brian Reil said in an email. The organization “will continue to discuss policy issues with EPA as part of our ongoing efforts to engage collaboratively with the agency as they work to develop regulations holistically for the power sector,” Reil said.

The group sided with EPA in the Supreme Court litigation, for example, and backs the agency’s bid to restore the legal underpinning for air toxics regulations that was rolled back under former President Donald Trump’s administration.

Its stance is more complicated on EPA’s proposal to further toughen “good neighbor” requirements under a Clean Air Act provision that bars state regulators from allowing industry emissions that contribute to downwind smog problems outside of their boundaries (Greenwire, March 11). While backing the framework for the emissions trading program, the institute wants changes in some provisions directly affecting the power sector, according to comments on the proposal submitted in June.

E&E News reported on EPA’s initiative for the power sector in January this year, which helped spark Capito’s subsequent letter to the agency (Climatewire, Jan. 24).

This past March, Regan publicly announced the strategy, casting it as an effort to keep the power industry on a path toward more reliance on natural gas and renewable energy sources. “This is a pivotal moment for the sector, and EPA is ready to seize it,” he told an audience at an energy conference in Houston (Greenwire, March 10).

The Biden plan has so far been slow to have a tangible impact. As the United States’ economy last year began to recover from the shocks of the Covid-19 pandemic, the power sector’s greenhouse gas emissions rose more than 6 percent in comparison with 2020.

And EPA’s timetable for reinstating the legal basis for the air toxics regulations was unexpectedly slowed after the White House blocked the proposal’s release for months, reportedly for fear of angering Senate Energy and Natural Resources Chair Joe Manchin (D-W.Va.), whose support the administration was then courting for its climate and social spending bill (Greenwire, Feb. 10).

But Perciasepe pointed to the long-term incentives for use of renewables in the recently passed Inflation Reduction Act as one reason to think that the emissions trajectory will now change. While it’s “hard to say” that there have been significant reductions in the almost two years Biden has now been in office, he added, some of these policies “will really start to make a difference.”