Inside FEMA, a reckoning on race and flooded mansions 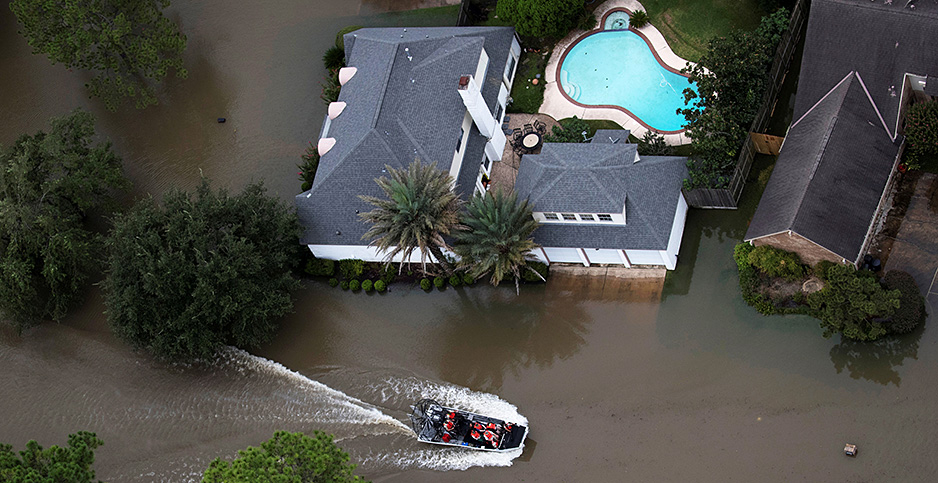 Flood survivors are evacuated from an affluent neighborhood in Houston during Hurricane Harvey in 2017. The Federal Emergency Management Agency is scrutinizing its commitment to equity in disaster programs. Adrees Latif/REUTERS/Newscom

Through internal emails, public advisories and virtual seminars, the Federal Emergency Management Agency says it wants to do better on equity, and it acknowledges that disasters and disaster recovery programs unfairly burden low-income and minority populations.

The effort began last fall before the election and has accelerated under President Biden. As FEMA helps distribute coronavirus vaccines nationwide, it is prioritizing underserved populations and last month established a civil rights advisory group to "identify and eliminate inequities" in who gets inoculated.

Major disparities remain. In almost every state, for example, Black residents have died of COVID-19 at a rate that exceeds their portion of the state population, according to data collected by the Kaiser Family Foundation. But in every state and the District of Columbia, Black residents account for a disproportionately small share of the vaccinated population, the data shows.

More broadly, senior FEMA officials have started scrutinizing the agency’s traditional programs, which distribute billions of dollars to states after major disasters and are thought by some analysts and lawmakers to favor affluent communities and individuals.

"We need to start asking difficult questions about the programs we deliver," a senior FEMA official wrote in a recent internal email, according to a source close to the agency who read the email to E&E News but declined to name its author.

The email highlighted recent FEMA grants that paid to protect flood-prone mansions in an affluent Houston neighborhood, and said the projects "demonstrate the challenges ahead of us" in making post-disaster programs more helpful to low-income communities.

On Feb. 6, FEMA’s Office of Equal Rights published an advisory telling states and other disaster aid recipients that they "should routinely consider the needs of all the populations they serve, including racial, ethnic and limited English-proficient communities, as well as individuals with disabilities, to ensure compliance with federal civil rights laws."

The advisory notes that civil rights regulations authorize entities such as states that distribute FEMA aid to collect "data and other information necessary to ensure nondiscrimination in federally assisted programs and activities."

Highlighting vaccine distribution dashboards run by Alaska, Delaware, Florida and Indiana — all of which track vaccine recipients by race and ethnicity — the advisory raised speculation that FEMA might start tracking the race and ethnicity of people who receive emergency aid after a disaster.

"That’s a huge step forward that FEMA is even talking about equity publicly," said Carlos Martín, a senior fellow at the Urban Institute who has written about how disaster aid programs neglect low-income households.

"We’re not even two months into this administration, so I’m not going to assume they’re going to change all the rules. But it’s important talk to be having," Martín said. "Ultimately, it all depends what they actually put out."

FEMA has been under pressure to address equity since facing criticism over its response to Hurricane Maria, which demolished Puerto Rico in 2017, Martín said. The territory’s struggles to rebuild led analysts and lawmakers to complain that FEMA and the Department of Housing and Urban Development were negligent in withholding some disaster aid.

"This is the culmination of a lot of questions coming out post-Maria," Martín said.

FEMA has deflected attention from some of its activities on equity. The agency’s public affairs office declined to answer questions that E&E News posed Thursday and would not release a strategic plan completed in October that emphasizes equity.

But Michael Grimm, who runs FEMA’s Federal Insurance and Mitigation Administration, discussed the plan at an online forum in October, saying that one goal is "to deliver our programs with equity to increase resilience of all communities."

"The path that we laid out is ambitious and displays a lot of introspection," Grimm said at the forum, which featured speakers discussing equity and resilience to disasters. "We’re committing to include underserved, marginalized and vulnerable populations in all of our efforts so that our programs work for everyone."

The report, a three-year plan for Grimm’s department, marked "the first time that my agency and organization has embedded these principles into our strategy," Grimm said.

FEMA and other agencies providing disaster aid will face challenges in making programs more equitable, including a vast web of laws and regulations that govern an array of aid programs.

Federal regulations limit how much FEMA can give individuals in a disaster zone — the current maximum is about $35,000 — but in reality, most people get only a few thousand dollars, which pays for emergency shelter, supplies and quick home repairs.

Other programs, such as FEMA flood insurance and Small Business Administration disaster loans, can provide up to $250,000. But affluent people are much more likely to qualify for those programs, which experts say creates a divide in how quickly and thoroughly individuals and communities recover from disasters.

The inequities drew criticism from an expert panel that advises FEMA, which said agency programs provide "an additional boost to wealthy homeowners and others with less need, while lower-income individuals and others sink further into poverty after disasters."

"Through the entire disaster cycle," FEMA’s National Advisory Council wrote in December, "communities that have been underserved stay underserved and thereby suffer needlessly and unjustly."

"The data shows us that when people are vulnerable, they are less likely to bounce back after disasters. Everything is disproportionately more expensive for these populations, from utility costs to insurance to maintenance," Fox said. "Simply put, natural disasters ensure that those who are the most vulnerable remain vulnerable before, during and after disasters."

One solution, suggested in an interview by former FEMA Administrator Craig Fugate, would involve FEMA augmenting its emergency housing aid, which is limited to paying for temporary repairs to make a home habitable. The limit means people who do not have property insurance and must rely on FEMA aid after a disaster can face huge personal costs to rebuild their homes.

"Does it make sense we don’t provide permanent funding for repairs?" said Fugate, who ran FEMA in the Obama administration and was on the Biden transition team. "There needs to be some review of whether it’s possible for FEMA to do more permanent [housing] work in the response phase without creating a dynamic of holding people harmless for not having insurance."

Another inequity arises from FEMA grant programs that require communities to pay a share of FEMA-supported projects that reduce the potential for damage from hurricanes, floods and other disasters, according to a FEMA official. Counties and municipalities with less money struggle to get these grants because they cannot afford the cost-share required by FEMA and lack the expertise to submit detailed applications.

"The wealthier communities, a lot of them have in-house technical experts and grant writers," said the FEMA official, who asked not to be named. "That’s how to really get at the crux of equity — finding a mechanism or service that is going to help communities compete for these grants."

The official said FEMA is sincere about addressing equity: "I don’t see this being a temporary blip; I see this as an agency cultural thing."

Chauncia Willis, CEO of the Institute for Diversity and Inclusion in Emergency Management and a former disaster manager in Tampa, Fla., is more skeptical about FEMA’s commitment to addressing equity.

"Have they embraced it to the point where they are beginning to change policies, update plans and really do a highly visible focus on equity? I would say not yet," Willis said.