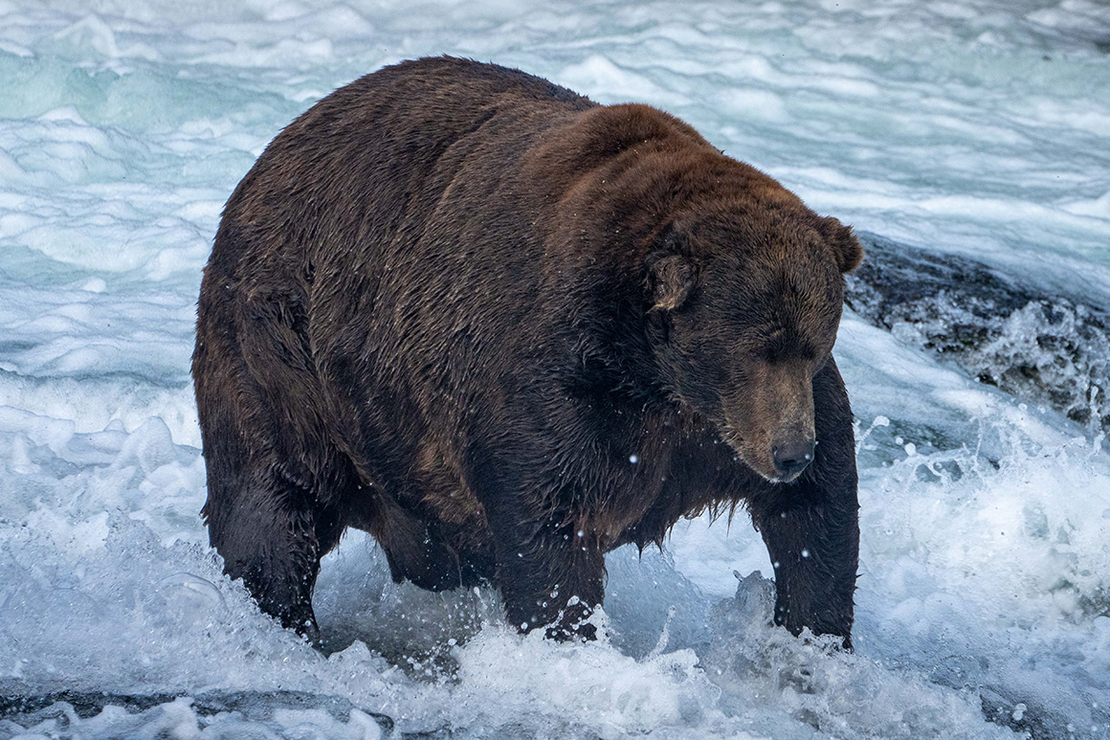 A former Fat Bear champ, 435 Holly — whose distinctive coat has been described as “toasted marshmallow” color — made a late surge in the polls that didn’t seem plausible.

“Did someone hack because holly is winning. … And that wasn’t possible earlier,” one user wrote in a Slack channel used to coordinate Fat Bear Week. Another person downloaded details about the votes and told colleagues, “It does look like there’s someone who spammed a lot of garbage emails from the same IP address.”

Those Slack messages, released by the National Park Service under the Freedom of Information Act, offer a behind-the-scenes look at how the contest organizers detected and responded to the Fat Bear Week voting scandal that garnered headlines in a host of national news outlets.

“All bears are winners but only one true champion will emerge,” the National Park Service says on its Fat Bear Week website.

This year, the fat bear known as 747 was leading in a semifinal vote on Oct. 9 when park staff noticed something fishy, the Slack messages show. At least two IP addresses appeared to be skewing the vote in favor of another bear, 435 Holly.

“Maybe we shouldn’t call a vote tonight,” one Slack user wrote. “I mean, we can’t really honor the cheating.”

Some Slack users’ identities aren’t clear from the messages. Several names are redacted in the chats, coming from a log identified as the Explore.org Slack channel.

“What you see is us working out in real time what is happening. It speaks for itself,” Candice Rusch, director of new media at explore.org, told E&E News on Tuesday in response to questions about the documents. “And yes, the park coordinates with us on Slack for Fat Bear Week.”

During the tournament, explore.org hosted online chats with its naturalist Mike Fitz and rangers from Katami. The site also has bear cams monitoring the bears of Brooks River in the national park.

The messages and other documents were released to the MuckRock news site and posted to the National Park Service’s website Monday.

Participants on the Slack channel hustled to remove the fraudulent votes as the group chatted about how to communicate the ballot stuffing to the public. “Don’t say a thing until we figure it out,” one person wrote.

Amber Kraft, the interpretation and education program manager at Katmai National Park & Preserve, wrote in the chat, “If we say that it was spammed, will that be what reporters are asking about instead of staying on the interpretive message?”

The updated numbers showed that 747 was the real winner, not 435 Holly.

“Damn that is a WIDE margin,” one Slack user commented. “Wider than 747’s rear.”

On the evening of Oct. 9, the Katmai National Park issued a statement on Twitter.

“FAT BEAR WEEK SCANDAL,” the tweet declared. “Like bears stuff their face with fish, our ballot box, too, has been stuffed.”

CNN and Jezebel picked up the story and NPS received questions from Rolling Stone and Bloomberg News, according to one email. Other records show inquiries from ABC News and NPR, among others.

Kraft with NPS shared a statement with others to help keep reporters focused on “the interpretive message” of the contest.

“The important thing to remember, however, is that despite which bear wins the most votes in the Fat Bear Week competition, they are all winners,” said the statement. “Bears get fat to survive and the health of Katmai’s ecosystem, as demonstrated by the sustained run of salmon, clean water and thriving flora and fauna, enables their survival.”

Contest organizers found more than 9,000 votes had flooded in for 435 Holly, leading her to take the lead against 747. Organizers sorted out the spam votes and added a “captcha” to the fat bear poll to prevent future spamming (E&E News PM, Oct. 11).

“9,272 fraud votes,” said one Slack user. “Looks like he stopped after his girl was showing in the lead.”

Another speculated, “Is it mean of me to wish the spammer had a lot of money riding on 435?”

“Well y’all, you’ve made it,” said someone else. “The weird corners of the internet tried to rig the election.”

According to the Slack messages, the National Park Service’s Washington office directed Katmai staff to refer press questions about the “voting scandal” to explore.org. Others responded that the park staff needed to take action after the spam votes were discovered.

“Yes, the park handled it very well and waiting for some mucketymuck in Washington to craft a response would’ve taken days and made things worse,” said one user.

Representatives from the Interior Department, NPS and Katmai National Park did not respond to a request for comment.

Those behind the contest appear to have taken the spam vote scandal in stride. They saw it as an opportunity to bring more attention to the bears.

“As long as we find a way to bring it back to the bears im gonna count it as a win,” said one Slack user.