Inside Interior’s response to the Boss’ DWI arrest 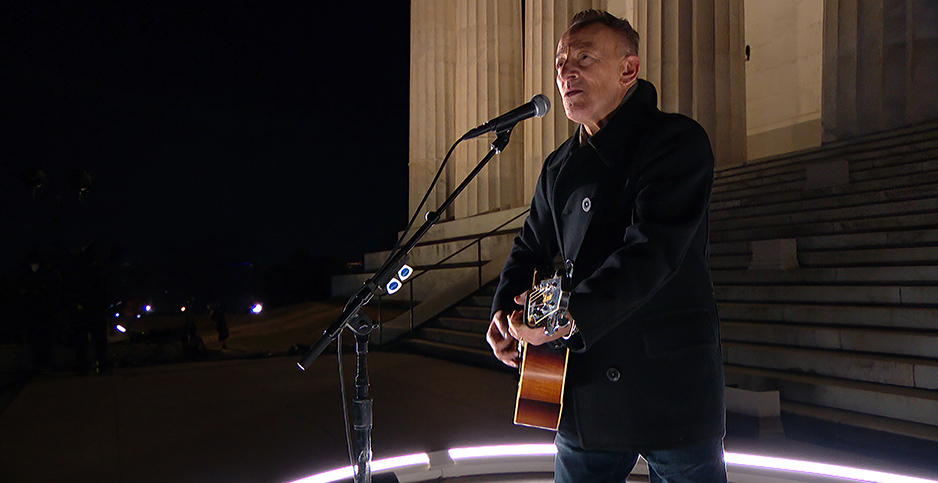 Bruce Springsteen performs "Land of Hope and Dreams" on the steps of the Lincoln Memorial during the Celebrating America concert in January, part of the Inauguration Day events for President Biden. Biden Inaugural Committee/AP

It’s not every day a living rock legend is arrested in his local national park.

But that was the conundrum facing National Park Service officials in February when news broke that Bruce Springsteen had been picked up months earlier for driving while intoxicated in the Gateway National Recreation Area, a sprawling 27,000-acre park encompassing sections of northern New Jersey and New York City.

Records obtained by E&E News under the Freedom of Information Act show that global media swarmed Gateway staff — followed soon after by an irate public, including many people livid about law enforcement’s treatment of the superstar musician.

They also help shed light on how top federal officials in Washington jumped in to manage the fallout, ultimately closing down any interaction with reporters on the sensitive subject. Officials would decide several of the records associated with the arrest should be withheld from the public and raised concerns internally about how a celebrity news outlet obtained a police report.

"I would like visibility into every Springsteen related inquiry," said Melissa Schwartz, communications director at the Department of the Interior, who had started only a few weeks earlier as a Biden administration appointee.

That request was part of a series of emails between Interior and the National Park Service discussing the Springsteen arrest.

"NPS will provide a list of media inquiries related to this matter but we do not need to send up each inquiry for [Office of Communications] review," replied Jenny Anzelmo-Sarles, NPS’ public affairs chief, who also thanked Schwartz for a recent chat to "provide the specific context."

As Anzelmo-Sarles’ team crafted its response about Springsteen, Schwartz questioned why the park service characterized Springsteen as "cooperative," arguing it was "unnecessary" and also asked that "any deviation" from that statement be sent up for clearance.

She also noted a news article that stated Springsteen’s blood alcohol content was within the legal limit. "If there is any truth to this story, there will be significant interest," Schwartz said.

Ultimately, Schwartz said, "NPS should refrain on any further comment at all — even the previously approved statement."

About 10 minutes later, Anzelmo-Sarles told NPS staff that Interior higher-ups had instructed them to "hold" on responding to Springsteen-related inquiries. "A briefing is in the works to get the political leadership up to speed," she said in the email.

Before the scramble to agree on a message, the "Born to Run" singer’s Nov. 14, 2020, arrest stayed under wraps for months. Then it suddenly exploded in press coverage around the world only to be resolved weeks later with a minor fine.

In a statement filed in Springsteen’s case in the U.S. District Court for the District of New Jersey, a park ranger who identified himself as R.L. Hayes said he saw Springsteen take a shot of Patrón tequila and start his motorcycle’s engine near the lighthouse on Sandy Hook in the afternoon of Nov. 14 last year.

The area is on a thin spit of land that extends into the Atlantic Ocean off New Jersey’s shore at the edge of New York Bay and is part of the Gateway national park.

Hayes spoke with Springsteen, who told the ranger he had taken two shots from the now-empty bottle, according to the report.

Springsteen "smelt strongly of alcohol" and "had glassy eyes," Hayes alleged. He failed multiple sobriety tests, "took 45 total steps during the walk and turn instead of the instructed 18" and refused to take a preliminary breath test, the ranger said.

The park service gave Springsteen three charges: driving while intoxicated, reckless driving and using alcohol in a closed area. All three are misdemeanors, although taken together, he faced up to $15,000 in fines and 18 months in prison.

Federal prosecutors at his Feb. 24 court hearing acknowledged Springsteen had a 0.02 blood alcohol content, based on a test taken later at a ranger station, The New York Times reported. While that is a quarter of the legal threshold for a usual DWI charge, federal and New Jersey law consider it a crime if a driver is impaired due to alcohol, regardless of his blood alcohol content. But Assistant U.S. Attorney Adam Baker noted that with Springsteen’s low test result, "the defendant would be considered presumptively not impaired."

Springsteen admitted in the hearing that "I had two small shots of tequila." His attorney, Mitchell Ansell, later wrote in a statement that the singer "is pleased with the outcome of today’s court appearance" and that prosecutors dismissed the two charges because they did not have the evidence to support them.

Jeep stopped airing a major Super Bowl commercial featuring Springsteen after his arrest was first reported but then resumed the ad after his court date. Days before the court appearance, Spotify released the singer’s latest venture: a podcast series with former President Obama.

An Interior spokeswoman contacted by E&E News for this story deferred to NPS for further comment.

"All outstanding FOIA requests related to this topic are being processed in accordance with law and policy," Anzelmo-Sarles with NPS told E&E News in response to questions.

Communications staffers were aware of Springsteen’s arrest the day it happened. Kevin Heuser, the law enforcement operations chief for Sandy Hook, a part of the Gateway park, emailed them to say a ranger had arrested the star and New Jersey resident hours earlier for driving while intoxicated.

Then the episode received little attention internally for weeks.

Preparations for a media onslaught began closer to Springsteen’s originally scheduled court date on Feb. 10, which presumably is when the incident would become public knowledge. On Jan. 27, one staffer asked others for the incident report and any video to review.

Then, on Feb. 6, staff learned the online tabloid TMZ had contacted a public affairs aide, and work began on a statement. By Feb. 8, the outlet had asked for "the police report and/or traffic tickets" for Springsteen’s arrest and later broke the story Feb. 10.

By then, NPS had put together a "communications plan" on how to handle the press for Springsteen’s arrest. "There is body camera footage of the encounter," it noted.

The public and media were to be directed to file a FOIA request for the video, according to one email. But the agency has since rejected those requests, saying those videos will not be released.

NPS denied E&E News’ request, saying eight short videos were being withheld in full under FOIA’s privacy and law enforcement exemptions. In addition, 24 pages of records would also not be released for the same reasons.

Senior officials at NPS were aware of who was requesting what about Springsteen’s arrest.

Anzelmo-Sarles shared a list of FOIA requests related to the rock singer with Shawn Benge, the acting NPS director, and Susan Farinelli, the acting NPS chief of staff, saying "FYSA," or "for your situational awareness."

As TMZ geared up to break the news of Springsteen’s arrest, a producer shared a photo of a police report on the incident with NPS staff. That set off alarm bells at the agency.

Brenda Ling, who works in Gateway’s public affairs office, forwarded it to others under the subject line "Breach of Privacy Records." She wrote, "It looks like someone went into a police report/law system and took a photo."

"I’m not exactly sure where the document would come from because it doesn’t look like part of the incident report from our [law enforcement]. It may very well come from federal court," said Ling, adding law enforcement in the park service’s Washington office will be asked "to investigate the matter."

Others were worried NPS was risking litigation, raising the question of whether the agency could be seen as fueling the media storm over a violation from months earlier.

"Would we put a statement out for any other dwi ticket that was two [months] old? We may be [setting] ourselves up for a lawsuit," said one NPS staffer.

"The statement will be delivered when asked by media. We’re not putting it out otherwise," Ling replied.

‘Mr. Springsteen … has done more for your great state’

Attention on the Gateway park, including its staff, exploded in the wake of news of Springsteen’s arrest.

"Didn’t expect to open the NYT website today and see you and the Boss in the same story. Oy. :)," one person emailed Daphne Yun on the park’s public affairs staff.

That team worked with at least 50 media outlets, with some news organizations sending three to four reporters their way, on the incident.

"It continues to grow. Also, calls from the UK as well," Ling said in another email.

But the emails also show public anger over the arrest. Public comments poured into Gateway staff’s inboxes, several laden with expletives. They were logged and entered into a spreadsheet.

Others took far more umbrage, upping the profanity-laced vitriol, while some critics were restrained.

"I am respectfully reaching out to you to voice my disappointment that Mr. Springsteen was arrested at Gateway Recreational Area," said one email sent to Jen Nersesian, the park’s superintendent.

"The details have just come to light within the past few days but I can safely say that Mr. Springsteen [is] an icon in New Jersey and has done more for your great state than probably anybody."