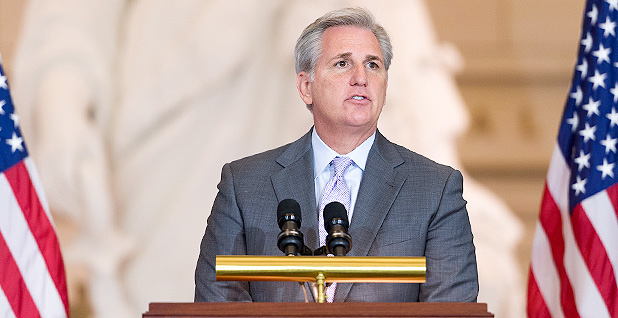 A highly anticipated two-candidate race to replace House Speaker Paul Ryan (R-Wis.) if the GOP holds on to power in 2018 seemed to quickly whittle down to one, Majority Leader Kevin McCarthy of California.

House Majority Whip Steve Scalise (R-La.) told Fox News he would not challenge McCarthy next year if he decides to pursue the speaker’s post in a GOP-led House, and McCarthy’s supporters rallied around him as party leaders scrambled to make sense of Ryan’s announcement that he would retire from Congress (Greenwire, April 12).

Under Ryan, and after President Trump took office, energy policy took a back seat to the pursuit of tax cuts and the turmoil associated with Trump’s Republican presidency. Still, McCarthy and Scalise have taken strong positions on everything from oil and gas production to Western land use, and those positions square neatly with the White House’s "energy dominance" agenda.

Many also interpreted Ryan’s departure as a sign that, with more than 40 Republican members of the House deciding not to run for re-election, the chamber will swing to Democratic control.

"No one wants dirtier air and more pollution, and come November, voters will elect a new House of Representatives that will choose a speaker who will fight the Trump administration’s extreme anti-environmental agenda," said Alyssa Roberts, national press secretary for the League of Conservation Voters (LCV).

Here’s a breakdown of McCarthy’s public lands and energy record:

In 2011, McCarthy advanced a bill to open millions of acres of roadless and wilderness study areas to industrial use.

"Millions of acres of land across the United States are being held under lock and key unnecessarily," McCarthy said in a press release highlighting the "Wilderness and Roadless Area Release Act of 2011." "My bill acts on recommendations made by the government agencies managing these lands so they are opened up for increased public use.

"This is just common sense."

At the time, conservation groups denounced the legislation as a corporate giveaway.

Former Interior Secretary Bruce Babbitt, who served under former President Clinton, called the bill the "most radical" attempt to overhaul public lands policy in his lifetime.

The bill did not make it to a floor vote.

"Government must still retain the authority to preserve our nation’s most treasured sites, but that authority was clearly abused by the Obama Administration when it restricted over 550 million acres in 34 national monuments under the Antiquities Act," McCarthy said in an April 2017 statement.

In 2014, shortly after he was named majority leader, McCarthy fought the designation of San Gabriel Mountains National Monument in his home state of California.

A Greenpeace analysis last year identified the California monument as one of six with the largest potential for energy development (Greenwire, May 10, 2017). McCarthy’s opposition to the monument drew the ire of conservation advocates.

"With all these outstanding public lands in our district, why does our congressman, House Majority Leader Kevin McCarthy, oppose America’s newest park — the San Gabriel Mountains National Monument — which has overwhelming support from nearby residents in Los Angeles?" the LCV wrote in a 2014 letter campaign.

In 2016, McCarthy cast several votes to expand drilling in U.S. waters and in Alaska’s coastal plain.

According to LCV data, the majority leader joined 242 of his House colleagues in rejecting a measure that would have blocked funding for research to support activity in the eastern Gulf of Mexico, where drilling is under a congressional moratorium until 2022.

McCarthy supported a proposal by Rep. Don Young (R-Alaska) to stop the removal of three Arctic Ocean lease sales scheduled under the Bureau of Ocean Energy Management’s 2017-22 offshore program. Trump’s Interior Department has proposed a new five-year offshore leasing strategy that would offer most of the U.S. outer continental shelf to drillers.

He backed a budget resolution last year that set the stage for the incorporation of a controversial tax bill provision that opened the refuge to drilling (E&E Daily, Dec. 20, 2017).

"[T]he ‘All of the Above’ plan calls for environmentally-friendly exploration in ANWR, which would decrease our dependence on foreign oil," McCarthy wrote in a July 2008 column.

As a member of the Congressional Western Caucus and House leadership, McCarthy played a key role in scrapping 14 Obama-era rules early last year.

The Bureau of Land Management’s Methane and Waste Prevention Rule was the only regulation to survive an attempt at rescission under the Congressional Review Act.

Republicans in Congress were able to eliminate a handful of public lands and energy regulations, including BLM’s land-use planning guidance and the Office of Surface Mining Reclamation and Enforcement’s Stream Protection Rule.

"In the weeks to come, the House and Senate will use the Congressional Review Act to repeal as many job-killing and ill-conceived regulations as possible," McCarthy wrote in a January 2017 Wall Street Journal op-ed.

"Perhaps no aspect of America’s economy has been as overregulated as energy."