Inside one naval base’s battle with sea-level rise 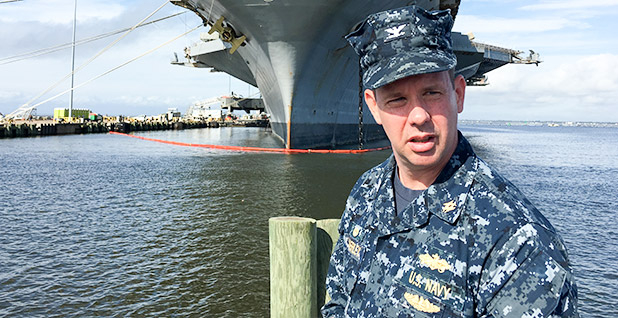 NAVAL STATION NORFOLK, Va. — A submarine resembling a slug sits heavily in these waters alongside a concrete pier whose underbelly has gotten 18 inches closer to the ocean over almost 100 years of docking warships.

This pier and 13 others on the waterfront of the world’s biggest naval base are slowly being replaced as rising sea levels contribute to the submersion of equipment that provides power and heat to some of the nation’s most sophisticated vessels. Destroyers, cruisers, an aircraft carrier and the sub were seen roped to piers here last month.

Base officials have begun temporarily shutting off electricity on some of these piers in anticipation of high water events caused by climbing sea levels and a combination of strong winds, rain and unusually high tides, according to a former base commander. The Navy acknowledges that the flooding events are already happening. It’s an admission that climate change is currently affecting aspects of training, ship maintenance and mission preparation.

"That’s one of the impacts we see already," said Navy Capt. Dean VanderLey, an engineer who oversees the infrastructure needs of the Navy’s bases in the Mid-Atlantic region, referring to disruptions in the delivery of steam to heat docked ships.

The ocean’s upward rise is placing the military inside the politicized debate over climate change. Democratic presidential candidate Hillary Clinton mentioned the base by name in a speech about the risks of global warming this month. Republican nominee Donald Trump, who has sought to be a champion of the military, expresses doubt about rising temperatures.

Putting politics aside, the military has undertaken a number of steps to understand how warmer temperatures could affect its operational readiness. A study by the Pentagon’s Strategic Environmental Research and Development Program assessed how the Norfolk base and others could be damaged by "storm forcings" when they’re exacerbated by higher sea levels.

Larger storm surge, higher waves, saltwater intrusion and flooding are expected to dramatically increase the likelihood of damage when seas rise an additional 18 inches, it found, calling that level a "tipping point." If the ocean rises 3 feet, which many scientists consider likely over the next 80 years, portions of the base could be "incapacitated."

At the terminus of Pier 6 is a gray gizmo with a tube descending into the black water of Willoughby Bay. It’s been there, in one form or another, since July 1, 1927. The gauge follows every perturbation of the water. Temperature, pressure, and each rise and fall are cataloged and studied.

It’s similar to a crayon that marks the height of a child on a door frame. The water here is growing by up to 5 millimeters a year. That’s an inch every six years, or more than twice the global average. The water here is about 18 inches higher than when the gauge was installed. Scientists expect the ocean to hit a growth spurt over the next 80 years and climb by another 2 to 4 feet.

‘More than an inconvenience’

That has physical ramifications. Ten of the naval station’s 14 piers were built in the early 1900s, around the time the sensor was installed. They are sometimes submerged. When an ocean wind pushes a large amount of water close to shore, the electrical wires and steam pipes running under the piers can be immersed. It also happens during heavy rain and when the tide is higher than normal.

"It happens all the time, at least once a month," said Joe Bouchard, who commanded Naval Station Norfolk for three years, until 2003.

That’s a readiness problem, he said. And it can be frustrating for naval captains with strict schedules.

Bouchard said he heard frequent complaints from skippers who would lament that the Navy can’t always maintain mundane mechanical tasks like supplying heat and electricity to engineering marvels, like $1.8 billion destroyers armed with guided missiles and whirring Gatling guns able to fire automatically from radar.

"No, it’s more than an inconvenience," Bouchard said. "It disrupts training. A ship is on a tight timeline to do all the training and maintenance that’s required to be combat ready for deployment. If you interrupt that … they have a hard time being ready for deployment."

The Navy’s response is an unnoticed declaration that some impacts of climate change are already being felt. There are no press releases, and the preventive steps aren’t political. It’s what sailors do when the water gets too high. They shut the power down on piers that are about to be soaked by salt water. That practice was begun in recent years, according to Bouchard.

VanderLey, who oversees Navy infrastructure in the Mid-Atlantic, is more measured in his assessment. He was standing on a pier inside the naval station a few weeks ago, being peppered with questions from a handful of reporters. The World Resources Institute organized the media tour.

No, he answered, the base hasn’t built any piece of infrastructure specifically in response to rising seas. No, he doesn’t feel hamstrung by Congress over a lack of funding to address risks related to flooding. Yes, sea levels are rising and it’s a problem, but it isn’t degrading the Navy’s ability to wage war, he said.

VanderLey’s cautiousness aside, his ideas about climate change contravene the opinions of some Republican lawmakers, including the party’s presidential nominee, Donald Trump. Trump has called climate change a "hoax," "bullshit" and a Chinese conspiracy.

Over the tipping point

The base is answering the risks of sea-level rise, if slowly. It has replaced four old piers with double-decker piers with higher utilities. The Navy plans to build eight more, but budget constraints and, some say, Republican opposition to climate-related projects have slowed the pace. Each pier costs more than $100 million.

The base recently constructed a new building that sits 3 feet higher above the ground than normally encouraged by the Federal Emergency Management Agency. It’s including new standards and guidelines in its engineering plans for future projects.

The signs of flooding are numerous here. Norfolk is seeing the fastest rate of rising seas on the East Coast, a combination of sinking land and climbing water. Subsidence caused by freshwater pumping, which compacts land, is responsible for about half the sea-level rise in this area, according to a report by the U.S. Geological Survey.

The rate at which water around here is rising is what scientists call linear. It’s a steady increase. The rise has accelerated over the last 50 years or so, but it’s still predictable. Flooding is different. It’s nonlinear, because it has tipping points. When the water reaches a certain level, there’s a burst of flooding events. That happens when the sea level overburdens local infrastructure, like storm sewers, basement drains and streets.

Some say an early tipping point has already been reached.

Over the last 60 years, the number of damaging high tides has increased from a few every year to about 12 now, according to scientists with the National Oceanic and Atmospheric Administration, which monitors the Sewells Point tide gauge.

It can happen on a sunny day, when the tide exceeds its average height by about 18 inches. Throw in some rain or a heavy wind, and areas of the base and the leafy neighborhoods nearby are all but certain to see standing water on roads.

"You’re starting to get this big, exponential increase in events," said Billy Sweet, a NOAA oceanographer who studies sea-level rise in the Norfolk area. "Eventually, you’ll be touched, flooded, at some point of the day, every day of the year. That’ll be at some later date down the road."