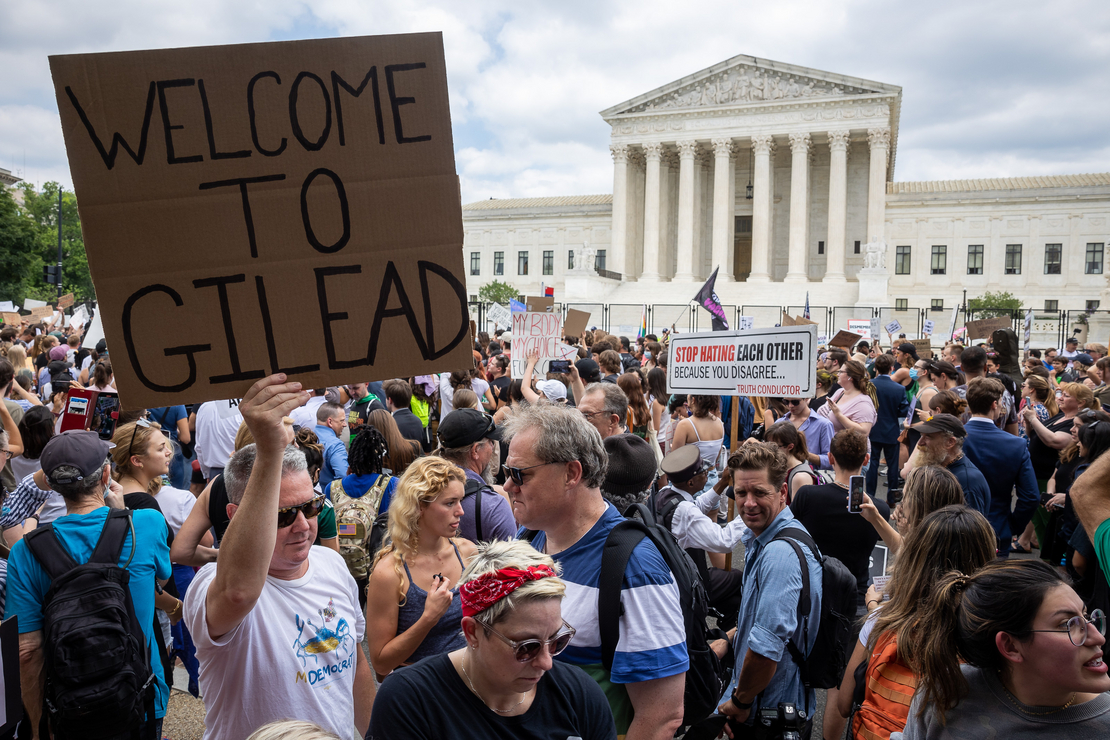 People protest outside the Supreme Court after the announcement of the decision in Dobbs v. Jackson Women's Health Organization on June 24. Francis Chung/E&E News/POLITICO

The U.S. Park Police in June mobilized a special detail to follow swelling crowds and keep tabs on multiple bomb threats in the wake of the Supreme Court’s ruling that overturned abortion rights recognized in the landmark 1973 ruling Roe v. Wade.

Records obtained by E&E News under the Freedom of Information Act shed light on the minute-by-minute tracking of the protests, which burst open in the nation’s capital and across the country on the morning of June 24 after the court released its decision in Dobbs v. Jackson Women’s Health Organization.

A series of emails detailing situation reports or “sit reps” show the National Park Service’s law enforcement officers reporting on the ebb and flow of demonstrations, incidents of graffiti and more serious concerns over public safety. Even before the ruling was announced around 10 a.m. that day, various police agencies across the city were coordinating to prepare for potential civil unrest.

“The USCP JOCC has been stood-up in response to the anticipated release of high profile SCOTUS case decisions,” said one email, sent at 9:45 a.m., referring to the U.S. Capitol Police Joint Operations Command Center.

In response to the protests, the Park Police activated a special detail and maintained a liaison in the command center, according to a memo sent days later. They monitored protests at the high court itself, as well as areas near the White House and Lafayette Square. Other locations mentioned in the records are Columbus Circle near Union Station and Folger Park, just a few blocks from the Supreme Court.

“The Roe v. Wade/Dobbs SCOTUS opinion has been released and the [opinion] has overturned the original Roe v. Wade decision/opinion,” Park Police Capt. Frank Hilsher wrote in an email shortly after the ruling was handed down.

“Opposing groups are currently present on 1st Street NE on the steps of the SCOTUS. Groups are peaceful at this time,” added Hilsher, who serves as commander of the agency’s special forces.

A short time later, Hilsher reported the first of at least two potential bomb threats. He wrote that the Capitol Police were investigating a tip from someone in the crowd in front of the Supreme Court that “two (2) ‘pro-life’ females were overheard talking about possessing explosives.”

In a subsequent email, Hilsher said the incident was likely a “false report” with “no evidence of explosives in the crowd.”

A second incident that same day centered on an individual who called the Metropolitan Police Department’s emergency line saying “he has a bomb and it will go off in one hour at SCOTUS.”

The caller gave a description of himself: a white male in his mid-30s “wearing a white tee shirt with a self described black ‘man purse,’” according to an email from Park Police Capt. John Matula.

“MPD reporting that USCP currently has a subject matching that description stopped in the area,” Matula added.

About a half-hour later, Matula said the person wasn’t a threat but a victim of a ruse.

“The subject identified in the notification is a blogger and the victim of ‘swatting,’” Matula wrote in an email. He noted the person had been the subject of such pranks in the past.

“When this blogger livestreams from SCOTUS, an unknown individual calls 911 reporting a bomb threat and gives the description of the blogger as the suspect as well as the location he is livestreaming from,” the Park Police officer said.

Park Police action that day was not limited to the Supreme Court.

NPS law enforcement units kept a close eye on marches and rallies in other spots across Washington throughout the weekend. Photos of protesters were sent over email to other agency officials.

“The group has called an audible and have now entered into Lafayette Park,” said one email, adding, “They remain vocal but peaceful.”

“Ultimately they plan to march back to SCOTUS and maintain their vigil,” the message continued. “USPP assets continue to monitor.”

Some activists took on a fearsome look.

“A group of approximately 40 individuals dressed in all black met in Folger Park,” according to one report. They marched to and from the Supreme Court, where “the group burned a few flags and spray painted a city street.”

Twiname added, “The USPP is committed to peaceful assembly and expression of First Amendment rights. To protect the integrity of our operations, we do not comment on specific operational plans.”

One top official wasn’t looped in on the updates, at least initially. NPS Director Chuck Sams thanked a colleague for passing on the reports, but he acknowledged he hadn’t been receiving them.

“Thanks I have not received these independently yet,” Sams said in an email the evening after the Dobbs ruling came down.

Later emails show Sams was copied on several of the “sit reps.”

“The director is updated regularly on emerging issues, as was the case here,” NPS spokesperson Jenny Anzelmo-Sarles told E&E News.

The park service also had to process permits for protests. One email shows Planned Parenthood, the reproductive health care nonprofit, requested such a permit within hours of the court’s decision.

As the protests decreased in size, the Park Police appeared to pull back. By the following Monday evening, its special detail was taken offline.

“No NPS resources were impacted by these demonstrations,” said one email. “The USPP Special Detail has been demobilized.”

‘It is an emotional day’

The documents also reveal that soon after the Dobbs ruling was released, the Interior Department’s top aide offered advice to the agency’s more than 75 political appointees.

“There is no sugar-coating it: today is an emotional day,” Interior chief of staff Rachael Taylor said in an email. “Take care of yourself, be kind to each other, and talk to your supervisor if you need a break. My door is also open if you need support.”

She also warned, however, that those addressing the court ruling on social media should hew to the limitations of the Hatch Act.

“Just a reminder that online or otherwise, even in our personal capacities, we are all treated as though we are spokespeople for the Department,” Taylor wrote.

Her June 24 email went out before either President Joe Biden or Interior Secretary Deb Haaland had addressed the court’s ruling.

Haaland would later call the decision “shameful” in a tweet. “Women in this country deserve better. Congress must act,” the Interior secretary said (Greenwire, June 27).

Although some lawmakers on Capitol Hill publicly pressed to use federal lands for abortion services in states where they might otherwise now be restricted, the documents offer no new insights about those discussions within Interior.

Internal staff discussion in the records indicated only that media requests on the issue would be directed to the White House.

Since the Supreme Court’s decision on abortion, Biden has signed executive orders in response, including one to support people traveling out of state for medical care. Also, Democrats are pushing legislation to codify abortion protections, which has become a galvanizing issue for the coming midterm elections.