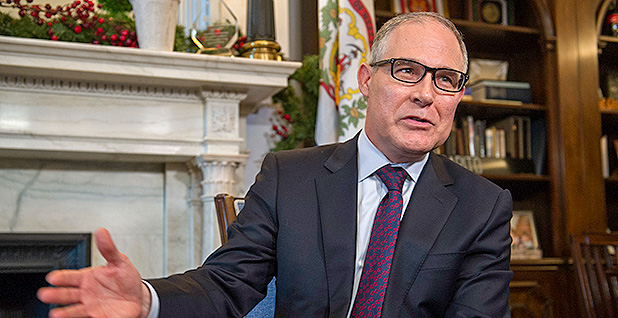 Oklahoma Attorney General Scott Pruitt goes before the Senate Environment and Public Works Committee tomorrow in his bid to become the next U.S. EPA administrator. Photo courtesy of AP Images.

Both utilities were seeking to upgrade their power plants to comply with U.S. EPA’s rules on haze and mercury. And both were asking regulators on the Oklahoma Corporation Commission for approval to recoup the upgrades’ costs from customers.

Pruitt was charged with representing consumers in both cases before the commission. The big difference in his stance: where PSO agreed to work with EPA on a transition away from coal, OG&E fought the agency and favored expensive pollution controls designed to keep its coal furnaces humming.

"The buzz saw PSO ran into here was more political," said Jim Roth, a former Democratic commissioner. "They made a commercial decision, but some at the Corporation Commission and the AG’s office felt like no one should deal with Obama’s EPA."

The two rate cases offer a glimpse into how Pruitt has approached the complicated air quality rules he may soon be charged with enforcing.

Pruitt sued the agency over its plan to cut haze in Oklahoma in 2011, saying EPA had overstepped its legal authority in rejecting a state plan and implementing its own. A federal appeals court disagreed, and the U.S. Supreme Court denied Pruitt’s request to hear the challenge.

The Oklahoma attorney general then joined a series of states and industry interests to challenge the agency’s standard on mercury emissions for coal plants. In 2015, the Supreme Court found EPA failed to take into account the cost of its standards but left the regulations themselves intact (Greenwire, June 29, 2015).

Both utilities initially joined Pruitt’s haze challenge, but PSO later dropped its lawsuit. In 2014, the power company entered into a settlement agreement with EPA, agreeing to close one coal plant and install pollution controls on another, which would be retired in 10 years. To replace the lost coal capacity, it agreed to buy wind and natural gas power.

OG&E, by contrast, stuck with Pruitt during his haze challenge. And when that proved unsuccessful, the utility unveiled a compliance plan that relied on keeping its coal plants running by installing a series of expensive pollution controls. They included scrubbers to limit sulfur dioxide, low NOx burners to curb nitrogen oxides and activated carbon injections to tackle mercury emissions.

OG&E’s request, the largest in the utility’s history, was opposed by a coalition of senior citizens, environmental groups and large consumers. But not only did Pruitt favor OG&E’s plan, he didn’t even call a witness to support his position.

"That’s one of the more telling moments in Attorney General Pruitt’s tenure. The consumer advocacy position fell silent," said Roth, who represented wind and hospital interests in the case. "In my 10 years at the Corporation Commission, both as a commissioner and practitioner on behalf of clients, I’ve never seen an AG stay silent on a case of that magnitude."

To recoup the costs from consumers, OG&E had to convince state regulators the plan was the cheapest way to comply with EPA’s standards. It failed, at least at first.

A coalition including AARP, the Sierra Club and Oklahoma Energy Results LLC, a group representing independent power producers and large consumers, disagreed with the power company. Retiring the coal units and replacing them with wind and natural gas would be a cheaper way of meeting EPA’s standards, they argued. The utility also failed to account for future environmental regulations, which could make burning coal more expensive, they said.

Regulators on the Oklahoma Corporation Commission agreed and in 2015 rejected OG&E’s plan.

Fighting on behalf of fuel diversity

E&E News contacted the attorney general’s office and OG&E, but neither returned requests for comment.

Critics say the case illustrates Pruitt’s cozy relationship with industry interests. The Oklahoma attorney general has accepted nearly $37,000 in campaign contributions from OG&E and its employees, according to the watchdog FollowTheMoney.org.

PSO and its employees contributed $1,600 to the attorney general’s campaigns.

Pruitt became so engulfed in his battle against EPA, his detractors argue, he was willing to saddle consumers with the cost of keeping OG&E’s coal plants running.

"While interventions into rate cases are complex and varied, what we do know is this: As attorney general of Oklahoma, Scott Pruitt has repeatedly bent over backward to facilitate the continued burning and extraction of fossil fuels," said Al Armendariz, a former EPA regional administrator in Dallas who now serves as an associate regional director for the Sierra Club’s Beyond Coal campaign.

Others disagree. Installing new scrubbers was estimated to be half the price of new natural gas units at the time OG&E analyzed its options, said Thomas Schroedter, an attorney representing Oklahoma Industrial Energy Consumers, a coalition representing large customers in favor of the plan.

Likewise, scrubbers were estimated to be the cheapest compliance option for PSO, Schroedter said.

"I believe that these cases are telltale examples of Scott Pruitt’s willingness and dedication to promote the public interest based on the information available at the time and also reflect his commitment to protect the interests of those he represents based upon the specific facts of the cases in a balanced and common-sense manner," he told E&E News in an email.

The fuel diversity argument proved a hallmark of Pruitt’s position in both cases. Soon after being rejected, OG&E returned to the Corporation Commission with a proposal to spend $500 million on scrubbers at the utility’s Sooner coal plant. The investment was needed to comply with the haze standards, the utility contended.

As for Pruitt, his deputies argued the move was needed to ensure fuel diversity, protecting consumers against natural gas price spikes.

This time, Oklahoma regulators agreed. "If additional OG&E coal units were to be retired or converted to natural gas, cost to customers would be higher and OG&E would no longer have sufficient coal-fired generating capability to protect customers from future natural gas and market price spikes and price volatility," commissioners wrote.

The Sierra Club and Oklahoma Energy Results have appealed the decision to the state Supreme Court. Their argument: It makes little sense to spend $500 million on a 37-year-old plant that is so inefficient, the regional transmission operator idled it for most of the last year.

Still, Pruitt had hit on a winning argument. PSO, the utility that settled with EPA and agreed to buy more wind and gas, was seeking approval for its $130 million environmental compliance plan.

Pruitt’s deputies challenged the company’s settlement with EPA, saying the utility was predisposed to closing its coal units.

An administrative law judge, a technocrat tasked with offering a recommendation to regulators, disagreed. Scrubbers were nominally the least costly option for compliance, the judge noted. Yet the cost between installing scrubbers and retiring units was so minimal, it would have little impact on consumers.

In fact, the judge reasoned, the move protected PSO against the possibility of future environmental regulations.

The attorney general’s office vociferously disagreed. The judge’s opinion was lacking, Pruitt’s deputies argued, because it failed to take into account the commission’s 2016 OG&E ruling.

In December, the Corporation Committee voted PSO could recoup $14 million from customers to pay for its upgrades, far less than the $130 million it initially sought.

Pruitt’s legal challenges to EPA have made him a hero among those who believe the agency has exceeded its legal authority under President Obama. Pruitt has filed 14 lawsuits against the agency during his tenure, challenging everything from EPA’s approach to the Freedom of Information Act to its rules on carbon emissions for power plants.

"Mr. Pruitt respects and upholds the Constitution, and understands that many of the nation’s challenges regarding clean air and water are best met at the state and local level," the American Energy Alliance, the Competitive Enterprise Institute and 21 other conservative advocacy organizations wrote in a letter to senators Friday. "It is, in fact the states that implement many of the nation’s environmental laws, and for good reason."

But Pruitt’s record in Oklahoma is worrying to others, who say his approach to the two utilities’ rate cases underscores a flaw in his thinking.

There is a misunderstanding that cleaning up pollution is costly, said Daniel Cohan, an associate professor of engineering at Rice University not involved in the cases. Today, the falling cost of wind and solar means utilities can reduce emissions without burdening customers with higher bills, Cohen said.

Pruitt’s "making us worse off in terms of health and the environment, and at higher cost," Cohan said. "That is my concern nationally. We weaken pollution standards without benefiting the economy."