Inside Regan’s meeting with an anti-Pebble mine billionaire 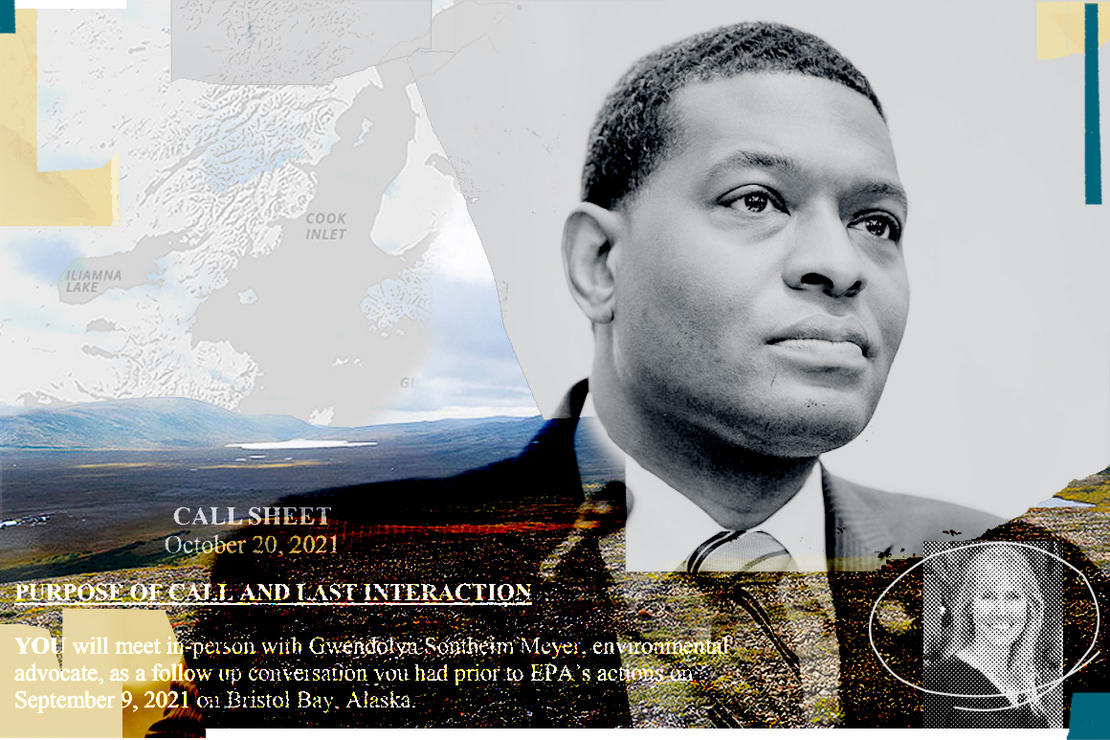 The campaign to block Pebble mine has netted a behind-the-scenes player — a billionaire heiress to the Cargill fortune.

Records obtained by E&E News under the Freedom of Information Act shed light on a meeting in October between EPA Administrator Michael Regan and Gwendolyn Sontheim to discuss Pebble mine, a copper and gold project in Alaska’s pristine Bristol Bay region. The billionaire’s opposition adds yet another adversary to the mine, which has faced resistance from anglers, tribes, environmental groups and even former President Trump’s son.

As part of the Cargill family, Sontheim is one of the wealthier people in the country. Forbes has estimated she is worth $5.2 billion. Last year, the San Diego Business Journal named her the region’s wealthiest person. Along with her charity work, she is considered an accomplished equestrian, training horses and having competed in shows.

Sontheim is also a prolific political donor, contributing to Democratic causes and candidates. Federal Election Commission records show in 2021 she gave several six-figure donations to the Democratic National Committee, the Democratic Congressional Campaign Committee and the Democratic Grassroots Victory Fund as well as $263,400 to the Nancy Pelosi Victory Fund.

In response to a subsequent FOIA request from E&E News, the agency divulged emails and memos behind that meeting, providing more detail on who Sontheim is and why she wanted to meet with the EPA administrator.

“I think you can expect [her] to reiterate her work with and support of the Tribes in the region and their efforts to protect Bristol Bay and create a sustainable economic and ecologic future for the region,” Dan Kanninen, partner and CEO of public affairs firm Arc Initiatives, formerly known as STG, said in an email to EPA.

Kanninen, a longtime Democratic political operative who also served as EPA White House liaison during the Obama administration, shared an updated bio for Sontheim, which noted she is the great-great-granddaughter of William W. Cargill, founder of the privately owned food giant.

In addition, she is a philanthropist, serving as a director of the Aqualia International Foundation and board chair of Feeding San Diego, and supports several other causes. Sontheim has “prioritized” her work with Native tribes and communities by getting involved in protecting Bristol Bay.

“She continues to work with a variety of individuals, tribes, and organizations on-the-ground to support the fight against the Pebble Mine,” the bio said.

Like the heiress, Kanninen and his firm are involved in the battle against Pebble mine.

“Arc Initiatives continues to lead efforts to protect this special place with the goal of finalizing protections by summer 2022,” the firm’s website said about Bristol Bay.

Sontheim said in a statement shared with E&E News that she visited Bristol Bay several years ago.

“I fell in love with the people, the fish, the wildlife, and the landscape. From that point on, I knew I needed to be a part of protecting Bristol Bay,” Sontheim said, adding she has been “proud to work with many of the wonderful people in the region who are fighting so hard to protect this incredibly special place from the threat of the Pebble Mine.”

She also said, “I was pleased to speak with, and then meet, Administrator Regan after the EPA took some early steps to restart the process to protect Bristol Bay.”

In response to questions from E&E News, Kanninen said his firm coordinates and helps manage “public advocacy and communications efforts” for a coalition of tribes, fishermen, conservation groups and other organizations fighting to protect Bristol Bay from Pebble mine.

“Gwendolyn, as a philanthropist and advocate, has been an ally to these tribally led coalitions,” Kanninen said, noting she is not a client of the firm.

Kanninen, who attended the meeting with Regan, said Sontheim “described her frequent visits to Bristol Bay, and her support for the coalitions doing the work to protect Bristol Bay from the threat of the Pebble mine.”

EPA spokesperson Tim Carroll told E&E News that Regan regularly meets with community members, elected leaders and others on agency policy and regulation “as we work to protect human health and the environment.”

Regan and Sontheim met to discuss EPA actions in the Bristol Bay Clean Water Act Section 404(c) process for the Pebble mine project “and EPA’s commitment to making science-based decisions to protect our natural environment, prevent pollution and protect a sustainable future for all Americans,” Carroll said.

Mike Heatwole, a spokesperson for the Pebble Limited Partnership, the company behind the mining project, told E&E News it welcomes anyone to weigh in on the plan “as long as we all agree that a fair, scientific and technically based process for the project is the best way forward.”

“As Ms. Sontheim is interested in economic opportunities for the region, we’d certainly encourage her to discuss her views with residents of Iliamna, Newhalen and Kokhanok who view Pebble development as potentially transformative for their communities. And we invite her to visit with us about our views on the project any time she is in the state,” Heatwole said.

Sontheim’s meeting with Regan took place between when EPA proposed to veto the mine last September and when a federal court granted the agency authority to veto it in November (Greenwire, Sept. 9, 2021).

At the time, opponents were pressing the agency to formally veto the mine as soon as practically possible. The Biden administration won plaudits from Pebble mine opponents when it proposed the veto after a similar effort under President Obama failed to be completed before President Trump arrived in the White House.

“If a CWA 404(c) determination is finalized, it would help protect waters over the long term that are essential to commercial, subsistence and recreational fisheries, and other activities that support Alaska Natives and communities in the state,” said Carroll, the EPA spokesperson.

‘All options are on the table’

Kanninen also said in his email that before meeting Regan, Sontheim would see Sen. Lisa Murkowski (R-Alaska), “at which time she is also expected to discuss Bristol Bay protections both via the Clean Water Act and potentially through legislation.” Kanninen added that Sontheim later had a call scheduled with Sen. Maria Cantwell (D-Wash.) “on the same issues.”

Kanninen was listed as one of the attendees for the Regan meeting in an invitation, which was confirmed to be held in the administrator’s office.

“I will be the one accompanying Gwendolyn throughout the day,” Kanninen said in another email.

Murkowski has been critical of Pebble mine and vowed to protect Bristol Bay, known for its sockeye salmon fishery. She has supported appropriations language that would have the Army Corps of Engineers deny permitting for the project (E&E News Daily, Nov. 18, 2020).

Murkowski’s office didn’t respond to questions from E&E News about meeting with Sontheim. Neither did Cantwell’s office about a potential call with the heiress.

EPA is watching for possible legislation related to Bristol Bay, according to a call sheet memo dated Oct. 20, the day before Regan’s meeting with Sontheim, which was prepared for the administrator.

Listed among suggested talking points, the memo said, “All options are on the table — both myself and our [assistant administrator] for the Office of Water, Radhika Fox, remain engaged with Congress to see if there are potential legislative solutions available.”

“The agency continues to communicate with our partners in Congress to ensure protections for Bristol Bay,” said Carroll of EPA, adding, “We do not have a comment to share on legislation pending before Congress.”

Regan also had a prior conversation with Sontheim about Bristol Bay.

Sontheim “first reached out to staff to connect with you in mid-August to express her concerns on Bristol Bay and pending actions at the agency,” the memo said.

It added, “She was heartened to hear from you prior to the decision on which direction the Agency would be going.”

Kanninen said as a part of his firm’s work for the coalition, he joined a phone call between Sontheim and Regan in September when the EPA administrator updated her on the agency’s recently announced moves related to Bristol Bay.

“On that call, it was suggested they might get together in person when she was next in town, leading to the October meeting that I also attended,” Kanninen said.

On Sept. 9 last year, EPA announced it would restart the veto process for the Pebble mine project under the agency’s Clean Water Act authority. That process is ongoing.

Waiting on a veto

Conservation advocates have long warned the impacts of Pebble mine would be disastrous for Alaska’s Bristol Bay, potentially forever damaging nearby wetlands and impairing the viability of its salmon fisheries.

But after EPA first proposed stopping the mine through the Clean Water Act in 2014, the agency failed to finalize the work needed to complete the veto before the end of Obama’s presidency. The Trump administration then went to work trying to undo progress on the proposed veto (Greenwire, Feb. 3, 2021).

Activists are now nervous about any administrative delays to Biden’s veto, given the political winds could once again turn and resuscitate the Pebble mine project.

These anxieties came to the forefront last week when EPA announced it would propose a revised version of the veto it authored in 2014, as opposed to proceeding with the text of the veto as it was drafted under Obama. More scientific information had come out about the mine since then, but activists weren’t having it, accusing the agency of “slow-walking” the process.

“For people who have seen this process politicized and held up before, that’s where the disappointment is coming from,” Alannah Hurley, executive director for United Tribes of Bristol Bay, told E&E News last week.

Asked about Sontheim’s meeting with Regan, Hurley said her group doesn’t directly work with her and was not a party to the meeting.

“We understand Ms. Sontheim works closely with others and has supported larger coalition efforts, led by our tribes, to protect Bristol Bay. We are grateful for any support to protect our region from the threat of the Pebble mine,” Hurley said.

Sontheim, Hurley and others are now waiting on the agency’s next move on Bristol Bay.

EPA is seemingly aiming to finish the job on the Pebble mine project during the Biden administration. Included in the memo’s talking points for Regan was a push for action.

“I am driving to ensure that not only do we have a final determination by the end of my tenure, but that there is enough time for us to defend it,” the memo said.