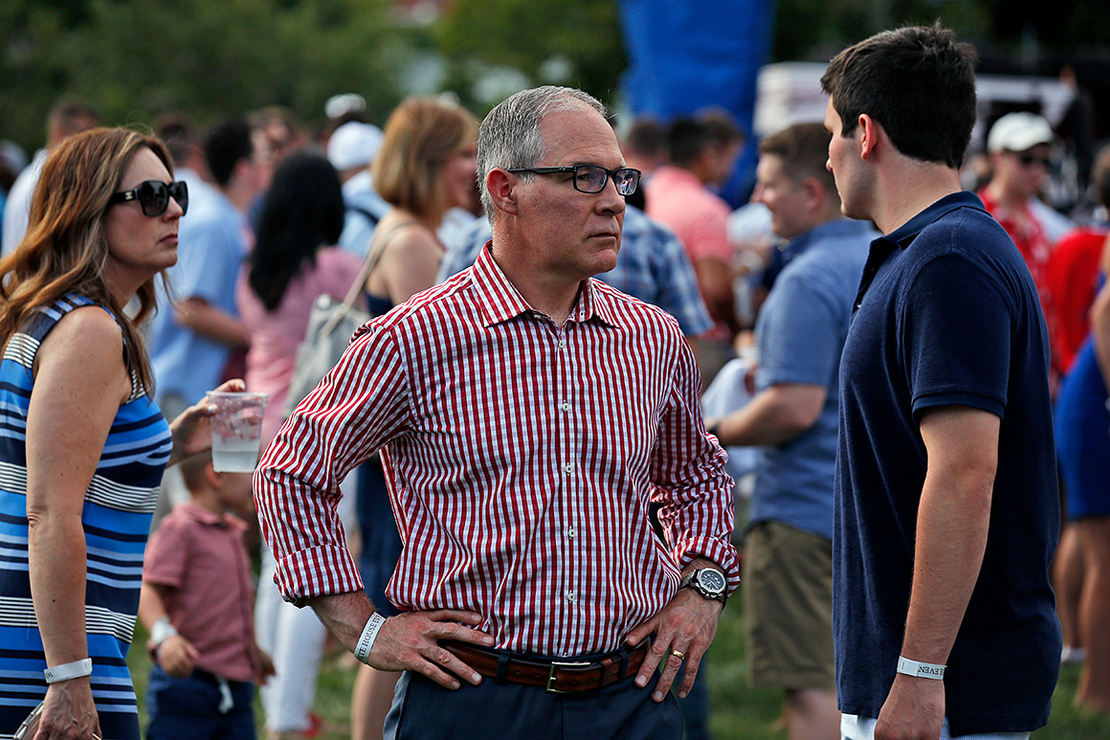 Former EPA Administrator Scott Pruitt during an afternoon picnic for military families on the South Lawn of the White House on July 4, 2018, the day before he resigned from his position. AP Photo/Alex Brandon

The Trump administration’s abrupt 2018 ouster of EPA boss Scott Pruitt prompted chaos and confusion inside the agency, according to internal records obtained by E&E News under the Freedom of Information Act.

Pruitt has kept a low public profile since his exit from the agency, but he’s reemerged in headlines as he’s been making calls to donors and former aides about a possible Senate run in Oklahoma (E&E Daily, March 18).

Former Trump administration officials told E&E News this week they think Pruitt may see a Senate campaign as an avenue to burnish his public image after his fall from grace at EPA.

Pruitt’s EPA exit was preceded by months of blistering reports of his alleged ethics lapses, including investigations into pricey travel, around-the-clock security, rent of a condo tied to a lobbyist with business before the agency and EPA aides taking on his personal errands (Greenwire, Sept. 28, 2018).

President Trump’s announcement that his embattled EPA administrator had resigned prompted emails from White House officials and reporters alike who were scrambling to figure out the details.

At 3:37 p.m. EDT on July 5, 2018 — the day after Pruitt attended the Fourth of July picnic on the White House South Lawn — the president announced via tweet that he had accepted Pruitt’s resignation and that Andrew Wheeler, then serving as deputy administrator, would step up as acting EPA boss, according to an archive of Trump’s social media posts.

Emails started pouring into EPA’s press office from reporters at E&E News, BuzzFeed, PBS NewsHour and a host of other news outlets seeking confirmation that Pruitt had resigned and a copy of his resignation letter.

Many reporters received one-line answers from EPA’s press officials: “We will refer you to the President’s statement.”

Chief of staff kept in the dark

At least one reporter, the emails show, heard directly from Pruitt that day.

John Roberts, then the chief White House correspondent for Fox News, appears to have been the first reporter who obtained the text of Pruitt’s resignation letter that day.

Jahan Wilcox, a top communications aide to Pruitt, emailed Roberts a copy of the resignation letter at 4:15 p.m. with the subject line: “Nice job getting this!”

Roberts replied: “Scott texted it to me..”

Roberts did not respond to E&E News’ request for comment for this story.

Starting that afternoon and into the night, press officials at EPA emailed the text of the letter to other reporters as well.

Yet some at the agency were left waiting. Pruitt hadn’t sent his resignation letter to his own chief of staff at EPA, Ryan Jackson, the records show.

Jackson wrote to White House Cabinet Secretary Bill McGinley at 6:58 p.m. on July 5, “Bill, I do not have a copy of the letter. I have a copy of the text of a letter which Administrator Pruitt texted to someone else at EPA and who forwarded it to me.”

Jackson sent along the text of the resignation letter he had received from another EPA staffer to McGinley, who replied, “Many thanks.”

EPA ethics officials sprung into action when they learned of Pruitt’s resignation.

Justina Fugh, the agency’s senior counsel for ethics, wrote to Jackson and then EPA’s deputy White House liaison Hayley Ford, asking them to help make sure Pruitt complied with his obligations to complete mandatory paperwork, including a financial disclosure report and a termination report.

“Typically, OGC/ethics has a meeting with the departing official so that we can go over the rules and the obligations,” Fugh wrote. “How do you advise we proceed in this situation? When will Mr. Pruitt be leaving?”

She also attached to her email a memo titled “Ethical Considerations Related to Your Transition Out of EPA.”

Pruitt did not end up having a close out briefing on ethics.”We can confirm that the departure briefing did not occur but hard copy briefing materials were provided,” EPA spokesperson Tim Carroll told E&E News.

Pruitt did not respond to a request for comment for this story.

‘Tough day’ and ‘Corruption Away!’

Reaction to Pruitt’s resignation was emotional.

“I’m sure it’s a tough day for you guys. Hang in there,” said one email, its sender’s name redacted.

Others were more celebratory.

“I guess your life is easier now. Corruption away!” said another email, addressed to Jackson. Wilcox also received a similar message.

Queries came thick and fast, including how Pruitt’s resignation could disrupt EPA’s operations.

“We’re getting quite a few ?s about PFAS,” Molly Block, another press official at the Trump EPA, said in an email. “How do we want to move forward on this?”

Her colleagues agreed to meet later to come up with a plan.

Other media questions were even more specific. There was one inquiry asking if EPA foresaw any change in the cleanup schedule for the West Lake Landfill Superfund site in Bridgeton, Mo., considering the turnover in agency leadership.

As reporters clambered for more information about Pruitt’s resignation that afternoon, EPA employees didn’t hear from their own agency until the evening. Many had already learned of it first from news reports.

More than three hours after Trump announced Pruitt’s resignation, Wheeler sent an agencywide email thanking Pruitt for his service and saying he would start as acting administrator the following Monday.

“A little cover for our right flank…” Konkus wrote to his colleagues.

Wheeler was later confirmed as EPA administrator in 2019 and remained in the job until the end of Trump’s time in office.