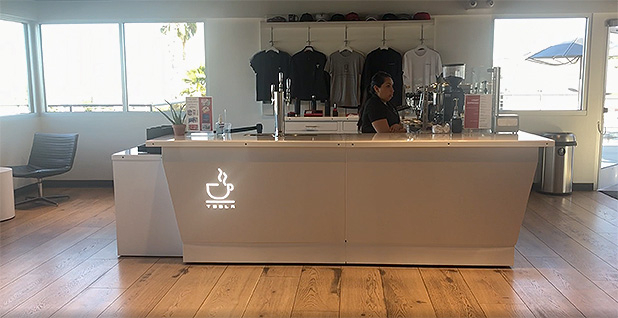 The lounge at the Tesla fast-charging station in Kettleman City, Calif. The lounge appears aimed at giving Tesla owners a members-only experience while selling them on the company and brand. David Ferris/E&E News

The electric automaker has a wide charging plaza for Teslas here, near the crest of a hill. Forty of its trademark fast chargers are lined up under canopies of solar panels. The company has two other charging plazas in California around this size.

The unique part of these plazas is what Tesla owners do while their cars charge.

In Kettleman City, a white and red building emblazoned with a giant T has a locked glass door with a keypad. The only ones with the code are Tesla owners, who find it on the dashboard screen of their Teslas. Inside is, for the lack of a better term, a deluxe waiting lounge.

Electric car charging takes a lot longer than the five minutes other car owners spend filling their gasoline tanks. The lounge here, in the dusty flat of the Central Valley, is Tesla’s idea for how to help drivers mark time as their batteries fill.

Fast-charging stations — ones that provide a decent jolt in a half an hour — are found at gas stations, in Walmart parking lots, at suburban shopping malls and outside curio shops. The idea behind locating chargers in many of these places is to give drivers somewhere to go while they wait, while selling them dining and shopping.

Charging companies and automakers are in an escalating race to design chargers and cars that can charge faster, betting that matching a gas station’s in-and-out feel will generate more EV sales. And pilot projects in the United States and other countries are experimenting with embedding chargers in the road, so the electric vehicles never have to stop to charge at all.

A 50-kilowatt fast charger, the most common kind, delivers a charge for 150 miles in an hour. Tesla’s latest charging standard supports peak rates of as much as 250 kW, which the company claims charges up to 1,000 miles an hour, or about 75 miles of range in five minutes. One charging station provider, Volkswagen’s Electrify America, is building chargers that top out at 350 kW. But electric cars now on the road aren’t yet designed to accept a charge that powerful.

For now, the idea behind the Tesla lounge in Kettleman City appears to be to give Tesla owners a premium members-only experience as they wait, while selling them on Tesla itself.

One of the customers last Thursday was George Aviet, a restaurateur from Silicon Valley who has frequent business down south in Burbank. After he docked his Tesla, he breezed through the door and gave a familiar wave to the young female receptionist, who is also the T-shirt saleswoman and the barista.

"You get a good cappuccino or espresso, and a good sandwich, and you have this lovely lady," he said, as he worked through a bready packet he’d gotten from a high-end vending machine. "And everyone is very friendly."

While waiting, a Tesla owner enters a Kettleman City lounge that is spare, clean and clubby. Promotions for Tesla are everywhere.

The first thing one encounters past the door is a wall with advertisements for Tesla’s solar panels and its home battery, called the Powerwall. Walking either way around it leads to a wide room with big windows and chill music spilling out of the speakers.

In the main area, things are mostly round. Some Tesla owners stand at circular bar-height tables; others recline in low-slung black armchairs by the window, resting their drinks on white cylindrical coffee tables.

To the left is a glass partition, and beyond that are black, squarish armchairs facing rectangular tables. Behind that is a row of white cubicles with low walls, each of which frames a square armchair. This looks and feels like a place to get work done. A rendering of Tesla’s prototype Roadster occupies one wall.

On the other side of the main, more relaxed area is a white reception bar. A staffer in a black polo shirt — during this visit, both were women — stands at a chrome tap, which serves cold-brew coffee ($3.75).

Behind her are five racks of Tesla T-shirts ($35) and a long shelf of Tesla baseball caps ($25). Beside her is a placard list of the games available on loan, including Scrabble, Connect 4 and Jenga.

On this Thursday afternoon in October, the space was mostly empty. But the barista, who gave her name as Annabell, said that the place can get busy on holiday weekends and during the summer when trans-California traffic is at its peak.

People drift in and out at irregular intervals, and the mood is relaxed.

"It’s so different than the regular stops. The gas stations are so crowded. It’s so clean, so private," said a woman named Tatiana who asked her last name not be used.

Her young daughter roughhoused on her shoulders, and crackers and a child’s milk carton sat on the table. She said she liked the bathrooms, which are impeccably clean, and that it had a diaper changing station.

"Sometimes at a regular gas station, that’s not the case," she said.

The thing that distinguishes Tesla’s Kettleman City lounge, aside from its carefully considered vibe, is that everyone inside can afford a Tesla.

The Model S sedan starts at $75,000 and the Model X at $81,000. The EV intended for the mass market, the Model 3, starts at $35,000, though, like all automakers, Tesla does its best to lure customers into more expensive packages. The lounge is like a golf club, in that everyone here knows they have an expensive hobby in common.

"I’m made to feel part of a membership, that no one else comes here," observed Aviet, the Silcon Valley restaurant owner.

Are waiting salons like this one the future of charging?

"I hope so," said David Hall, an architect traveling from Vallejo, in the San Francisco Bay Area. "This makes it worth buying the car. They should put them everywhere, for people doing the longer and more difficult drives."

Others weren’t so sure.

"This is mimicked after a lounge in an airport," said Tatiana’s husband, Eelco.

"But as tech takes off, as the time for charging becomes less and less," he said, "there’s no need for this anymore."