Inside Texas’ attempt to turn ESG upside down 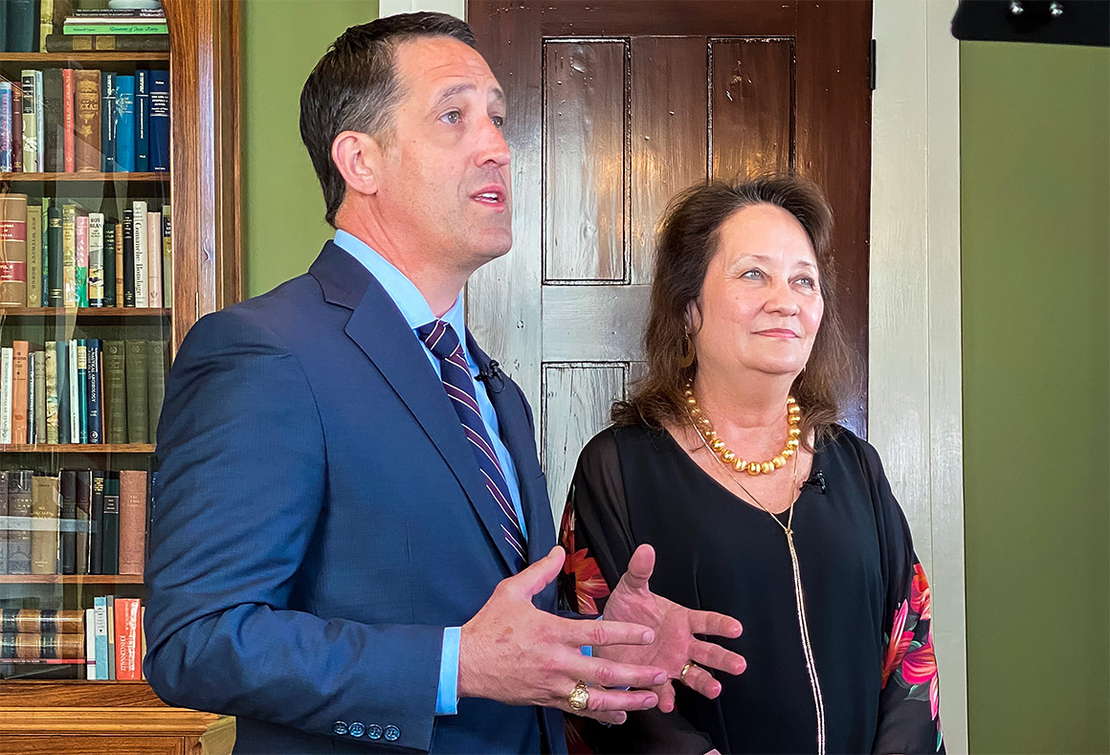 Texas is turning parts of Wall Street’s green rating system against itself.

The gambit — aimed at financial firms that “boycott” energy companies, Texas officials said — has drawn applause from Republicans opposed to the growing field of ESG investing.

“What they’ve created is an opaque system in which politicians have discretion,” said Witold Henisz, vice dean of the University of Pennsylvania’s Wharton School.

After nearly a year of deliberations, the Lone Star State in late August released a list of 10 financial firms and roughly 350 investment funds it deems to be “boycotting energy companies” — clearing the way for Texas officials to bar them from state business.

To decide which financial firms to penalize for their climate standards, Texas officials employed some of the same metrics used for ESG investing. Typically, that data is used to help screen investments for environmental, social and governance risks. But Texas is using it for the opposite purpose: to punish companies for pursuing strong environmental risk management.

Texas’ process is a fig leaf, financial experts say, for a political stunt that already has cost Texans millions of dollars.

For Republican officials, though, the Texas model serves a dual purpose. Using ESG research to blacklist companies could chill the circulation of corporate sustainability data. And a paper trail could make it easier for GOP officials to justify their actions to the public — including some conservatives who wanted the state to sanction even more companies.

Texas Comptroller Glenn Hegar (R) said he aimed to create a data-driven system for the “boycott” list that would resemble due process.

“One of the things that I wanted to make sure, no matter what, is that we created a process where we could tell people, ‘This is what we did; this is how you got on, or how you got off,’” Hegar said in an interview.

But observers say Texas has done the opposite. The state’s law allows the comptroller to decide whether a financial services company is “boycotting energy” — or if it is merely avoiding energy companies for an “ordinary business purpose.”

The result, they say, is a mess of subjective standards, like whose ESG data to count (different research firms can produce different results) or whether coal divestment counts as “boycotting energy” (Hegar said it doesn’t, but some Republicans think otherwise).

Henisz of the Wharton School said the policy opens the door for politicians to “penalize firms that they think are politically deserving of attention.”

“They’re gonna call it a system and say they have this whole spreadsheet and this whole process,” he said. “But they can manipulate the weights, they can change the rules — none of it is transparent.”

Texas scrutinized several climate disclosures from financial firms, according to a state document and interviews.

The comptroller’s office started with companies that had signed onto public pledges to cut climate pollution.

Specifically, they looked for those that had signed onto Climate Action 100+. Roughly 700 investment firms have joined that initiative, so Texas narrowed its focus to companies that had additionally joined either the Net Zero Banking Alliance or the Net Zero Asset Managers Initiative.

The comptroller’s office also used corporate ESG data collected by MSCI to identify financial firms to investigate — or, as Hegar described them, “suspects.”

Texas reviewed MSCI’s research into how companies manage climate and environmental risk, including how a board of directors handles climate risk, how a company deals with the environmental risks of its lending or underwriting, and what policies it has in place for financing oil and gas.

The comptroller’s office says it then converted that information into a scoring system. It focused on the top half of firms in that ranking — a total of 19 companies. Hegar sent them each a letter demanding more information.

Questions included whether a firm had committed to environmental standards beyond state or federal laws, what written policies it has for financing fossil fuels, and what consequences the firm might face if it doesn’t meet its climate pledges.

Meanwhile, the comptroller also was scrutinizing individual investment funds to ban from state business. Running 10 banned investment funds was enough to get a company on the “boycott” list, according to an explanatory document. So were factors such as a “broad prohibition on financing oil, gas, and coal” and committing to an “aggressive reduction in fossil fuel emissions” that aims for net-zero before 2050.

Hegar said data was crucial for discerning which financial firms were actually following through on their climate pledges. He found that the green marketing of some firms didn’t actually align with their oil investments.

“If you look at a lot of the rhetoric, you would think there should be a lot more companies on this list,” Hegar said, adding that Wall Street’s exaggerated ESG claims feed an unrealistic public expectation that the United States can quit fossil fuels.

“There’s a body of companies that people think, ‘oh, they’re boycotting oil and gas.’ But then when you really tear down into it — maybe they’re not, but the rhetoric sure shows that,” he said. “In other words, they wanna provide an image [that] they’re doing one thing, but in reality they’re doing another thing.”

At the end of that process, the “boycott” list comprised 10 companies — including BlackRock Inc., the only U.S. firm to make the list.

The company has become a conservative target because of CEO Larry Fink’s advocacy of sustainable investing. Texas Lt. Gov. Dan Patrick (R) called on Hegar to put BlackRock “at the top of the list.”

Hegar claimed that BlackRock’s climate advocacy did not factor into his analysis, and that his office concluded the firm stood apart from its U.S. peers based solely on data. More than 60 funds by BlackRock were flagged on Texas’ list.

“I do think [BlackRock] probably attracted a lot more attention in the media … than others do,” he added. “But that’s separate from this process.”

Just as notable were the companies that didn’t make Texas’ list.

Those companies have pledged to restrict financing coal. But Texas’ list is about oil and gas, Hegar said.

“In my opinion of the legislative intent, this is [about] a boycott of energy companies of oil and gas, not necessarily other fossil fuels,” he said. “Texas is not a coal state; West Virginia is a coal state … so we’re looking at it from a different angle.”

MSCI, the firm whose ESG data Texas relied on, stressed that it played no active role in the comptroller’s research.

Texas obtained a license to “our standard ESG ratings and data offering,” MSCI said in a statement to E&E News. “MSCI did not research businesses to help [the comptroller’s office] to create a list of financial companies that boycott energy companies. MSCI did not advise [the comptroller’s office] regarding their boycott list or help them to create it.”

Assessment of Texas’ vetting process from financial experts and sustainability advocates has been unforgiving.

“It’s kind of juvenile,” said Mary Cerulli, a finance veteran who is now director of Climate Finance Action. “This guy has lost his critical thinking.”

Hegar and the other Republican officials behind this effort don’t understand the nature of ESG investing, they and other experts said. Many of these financial firms remain major investors in fossil fuel companies. And the fossil fuel companies themselves are leaning into ESG reporting rather than resisting it.

That’s because ESG management is risk management, experts said. The term gets abused in Wall Street marketing to retail investors, they say, but for the institutional investors on Hegar’s list it often takes the form of sophisticated modeling and analysis.

Texas used data that “explicitly qualifies the environmental, social and governance issues to the degree that they affect financial performance,” said Taylor, who is also the executive director of the Stern School’s Ethical Systems collaboration.

“Anti-ESG investing,” she added, “is not really a thing, unless you’re saying, ‘We’re going to deliberately invest in poorly governed companies.”

Over eight months, Texas’ ESG crackdown has been estimated to cost the state between $303 million and $532 million in higher borrowing costs after municipal bond issuers exited the state, according to a Wharton study.

The public retirement funds that Texas’ list will affect, Cerulli said, are exactly the types of all-weather investments that need to manage risks from climate change and other long-term threats.

“Pension plans are the backbone of labor,” she said. “Who has a pension plan? Our state and city employees, our teachers, our good sanitation workers, the firefighters — [they’re] who’s going to lose out in the end.”

The fallout from the Republican campaign against sustainable investing could be meaningful, experts said.

About a dozen GOP-led states are looking to mirror Texas and West Virginia with their own “boycott” lists. Hegar said he hopes others follow his lead of using ESG data, in part because he sees it as a way to boost transparency into what investment firms are actually doing.

The movement, however, runs the risk of creating an inverse effect. An anti-ESG campaign could cast a chill over corporate climate disclosures, said Henisz, who is also faculty director of Wharton’s ESG Initiative.

U.S. businesses have been getting more sophisticated and transparent about their sustainability data, he said. They still have good reasons to do those things — because they make money — but talking about them now invites blowback from GOP officials.