Inside the effort to uncage a bipartisan wildlife bill 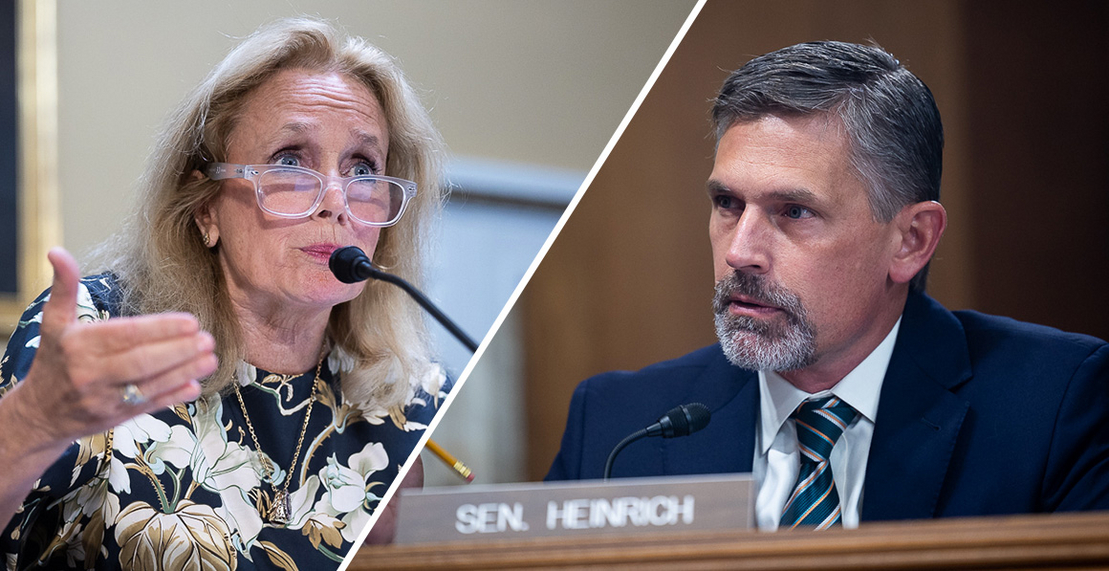 Five-and-a-half years ago, a band of lawmakers united behind an ambitious bill to recover and preserve America’s wildlife. It had the backing of the founder of Bass Pro Shops and the head of the National Wildlife Federation. Republicans and Democrats rushed to co-sponsor it. And yet, it still remains unfinished business.

But things could start changing as soon as today.

This morning, the House Natural Resources Committee will take another shot at advancing the proposal with its scheduled markup of the latest version of the "Recovering America’s Wildlife Act," H.R. 2773. Maybe this time, advocates hope, they can seal the deal.

“People in states of every political stripe understand that an ounce of prevention is worth a pound of cure," said Sen. Martin Heinrich (D-N.M.), “and this bill is really structured around … doing this recovery work when you can have the most impact, not waiting until a species is down to a few individuals.”

Heinrich is leading on the Senate version of the bill, S. 2372, with Sen. Roy Blunt (R-Mo.). The two lawmakers have to date collected 32 co-sponsors in their chamber, equally divided between the two parties.

Meanwhile, the House bill has 145 co-sponsors, endorsements from a diverse coalition of outside groups and well-situated lobbying support, a strong state-level constituency and a mom-and-apple-pie message. Still, the long journey of the "Recovering America’s Wildlife Act" goes to show that even a bill that starts out with everything going for it require two additional attributes: patience and persistence.

“I’m optimistic, but I’m being really careful,” said Rep. Debbie Dingell (D-Mich.), the longtime leader of the House legislation alongside Rep. Jeff Fortenberry (R-Neb.). “I take nothing for granted: I dot every ‘i,’ I cross every ‘t.’ But we’ve never had more support.”

Now, even as the bill’s House and Senate backers are emboldened about its current prospects, they have yet to resolve some of the most basic challenges: the source of funding and its allocation, which together are the very bedrock of this measure.

Put simply, the bill amends the Pittman-Robertson Act to provide an additional $1.3 billion per year for states and territories, and $97.5 million per year for tribes, to assist in their efforts to conserve, restore, and protect wildlife and habitat.

When it comes to the funding, some once hoped to tap offshore federal oil and gas revenues. Now, many lawmakers are looking to the general U.S. Treasury, while others would rather get the money from polluter fees collected by the Justice Department.

At the same time, though the House and Senate bills currently direct funds to state-level wildlife agencies, some lawmakers believe the federal Fish and Wildlife Service needs some help, too. States have pushed to tweak the funding formula.

“We have been searching for an elusive pay-for that both sides of the aisle can agree on for four years, and it has been incredibly difficult," Collin O’Mara, president and CEO of the National Wildlife Federation and one of the bill’s biggest champions, told the Senate Environment and Public Works Committee at a hearing on the legislation last month (E&E Daily, Dec. 9, 2021).

And then there are the myriad other details that can mean all the difference to particular lawmakers. The bill’s supporters, for instance, had to tinker with an Alaska provision before finally securing, last week, the co-sponsorship of Rep. Don Young (R-Alaska). It likely won’t be the last adjustment made to the bill to win over lawmakers.

The current program collects about $1 billion a year from excise taxes on sporting goods and related products and distributes it to states.

The new package has its roots in 2014, when the Association of Fish & Wildlife Agencies assembled a 26-member “Blue Ribbon Panel on Sustaining America’s Diverse Fish & Wildlife Resources.”

The panel had a stated goal of “reimagining a 21st-century model of funding conservation that bridges the gap between game and nongame species” and was co-chaired by former Wyoming Gov. David Freudenthal (D) and John Morris, founder of the Missouri-based Bass Pro Shops.

In a final report unveiled at the National Press Club in 2016, the panel recommended providing $1.3 billion annually. The funds would be distributed to implement state wildlife action plans, designed to conserve over 12,000 species of the greatest conservation need. The bottom-line goal is to avoid getting more animals listed as threatened or endangered.

“After considering a number of different funding options, they all agreed that dedicating revenues from energy and mineral use for conservation purposes is a logical choice,” the panel’s announcement stated.

One year later, the Alliance for America’s Fish & Wildlife was founded specifically to champion the legislation on behalf of the broad and diverse coalition of stakeholders, including state fish and wildlife agencies, conservation partners, the outdoor recreation retail and manufacturing sector, energy and automotive industries, and hunting and fishing organizations, among others.

But after a 2017 initial version of the bill sought to tap energy and mining revenues, lawmakers changed direction in 2019.

“There are some practical and some political forces at play there,” Sean Saville, of the Alliance for America’s Fish & Wildlife, told E&E News. “The House flipped [from Republican to Democratic control], and the bill’s sponsors felt that that type of proposal might not be politically viable.”

Saville added that advocates also wanted to eliminate any unintended perception that the bill would compete for the same funding source as the widely supported Great American Outdoor Act. That landmark 2020 legislation permanently reauthorized the Land and Water Conservation Fund at $900 million annually for the first time since the program’s creation in 1964.

The current House version of the "Recovering America’s Wildlife Act" would provide funding from the general U.S. Treasury, with states required to provide at least 25 percent in matching funds. The House bill’s authors exempted the measure from the usual pay-as-you-go rules that mandate offsets for new spending. In other words, the package is not paid for, a major problem for fiscal hawks of both parties.

He told E&E News last week he planned to offer a number of amendments at the markup today that would make the House bill an authorization, insert a sunset provision or propose new pay-fors.

The Senate version, by contrast, would at least partially offset the nearly $1.4 billion bill with fees and fines paid by polluters. Blunt and Heinrich have defended the pay-for, with Blunt calling it “fairly easy to explain” and Heinrich saying it was “very strong.”

Saville characterized that idea as a “viable and creative option developed by the bill’s sponsors in an ongoing conversation about achieving key policy outcomes without affecting the projected federal debt.”

The key phrase is “ongoing conversation.”

At last month’s hearing on the bill in the Senate Environment and Public Works Committee, Chair Tom Carper (D-Del.) made clear he wasn’t satisfied with the funding mechanism that wouldn’t necessarily address the ballooning federal deficit.

Carper and other fiscal hawks fear the Senate bill’s existing funding model is both ineffective and unreliable: It identifies dollars that would already go to Treasury, and the amount of money in environmental penalties that flows to the agency each year is highly variable.

Some members, including Carper, are also eager to change the scope of the bill to allow money to flow toward other federal agencies and offices dealing with endangered species recovery, including the Fish and Wildlife Service — not just state entities.

“We should absolutely address the funding needs of our states and tribes,” Carper said, but added, “we cannot afford to ignore the legitimate needs of our federal agencies and other partners.”

Still, the biggest boosters of the "Recovering America’s Wildlife Act" refuse to be deterred, with O’Mara saying discussions on funding sources continue and that the bill could hit President Biden’s desk by “Memorial Day, if not sooner.”

“There are no philosophical disagreements,” O’Mara continued. “It’s not a ‘whether we do it’ question. It’s a ‘how we do it best’ question.”

Westerman agreed with that sentiment, saying he was hopeful for a compromise on the pay-fors because he wants to be able to support the bill: if not in the House Natural Resources Committee today then when it hits the House floor at some later date.

“I hope we can find a solution, because a program like this is needed,” he said. “If we can work out a legitimate pay-for, I’d probably be a co-sponsor of the bill, but that’s the hang-up that I have.”

Congressional Democrats are also committed to working alongside Republicans to find common ground.

Dingell, a member of the House Natural Resources Committee, said last week that she had no interest in pursuing a version of the "Recovering America’s Wildlife Act" that would not be truly bipartisan. She added that she had successfully sought to postpone previous attempts to schedule markups of the bill by the panel in deference to Westerman, who still wanted to work through his concerns.

In the Senate, proponents of the effort are looking to Heinrich and Blunt to pave the way.

Heinrich, who has been working on this issue for years, said the buy-in from Blunt — a trusted congressional veteran and a member of Senate GOP leadership — was a major reason confidence is growing in the bill’s prospects.

“I really give Roy a lot of credit that he was the right person to have as a co-sponsor to actually get this done,” said Heinrich, “because he has the relationships on the Republican side and is really held in esteem by his colleagues, and he’s a trusted voice. And once I had Roy on board, we were able to have subsequent conversations with other members that really had legs.”

The two lawmakers said they spent hours of Senate floor time over the summer, amid consideration of the bipartisan infrastructure package, buttonholing colleagues on the legislation and locking down support, member by member.

Blunt, who participated in a joint interview with E&E News last week alongside Heinrich, said once Heinrich emerged as the “leader” of the effort and started making the rounds, “so many of our people in the hunting, fishing, wildlife, environmental focus in [Missouri] began to call and say ‘somebody needs to step up and be sure to get this done in a bipartisan way,’ and that’s exactly what we’re trying to do.”

While Blunt has been involved in previous iterations of the "Recovering America’s Wildlife Act," he attributed his heightened involvement now to the bipartisan success of the Great American Outdoors Act. Its passage in the Senate by 73-25, Blunt said, showed there was a political appetite for this type of policymaking.

And because the "Recovering America’s Wildlife Act" takes a proactive approach to species protection and empowers states to do the conservation work rather than Washington bureaucrats, Blunt believes the legislation should be palatable to conservatives.

Blunt traveled across his state in November to promote the plan, and he could ultimately end up pitching the bill as a legacy issue: He is retiring at the end of the year after nearly 2 ½ decades in Congress.

If Blunt can help push it across the finish line, O’Mara said, his name could go right up there with Pittman and Robertson.