Inside the Exxon sting: Aliases, fake oil funds, a payday 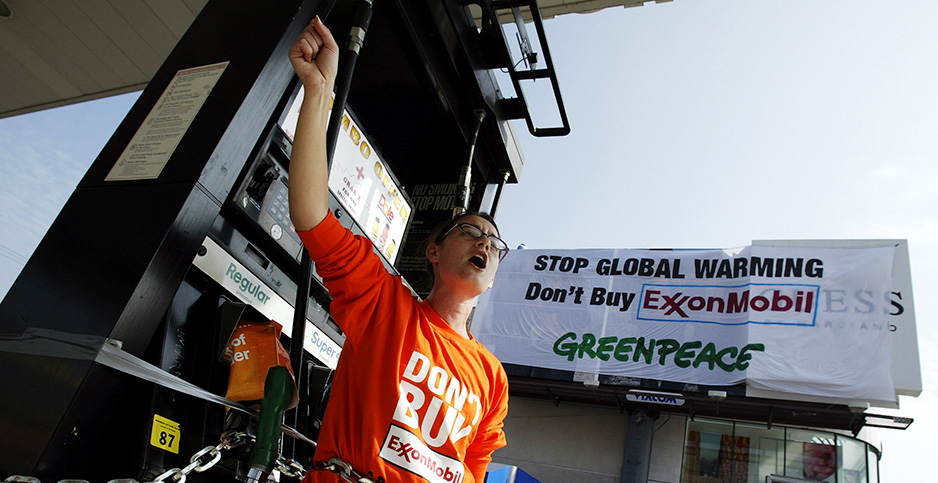 Greenpeace activists chained themselves to Exxon Mobil Corp. gas pumps in 2002 as part of the group's long-running campaign against the oil giant. Dang Ngo/Zuma Press/Newscom

It was a tantalizing opportunity, even for a highly paid energy lobbyist.

A man claiming to be a Dubai, United Arab Emirates-based executive recruiter was looking to hire someone to set up a Washington influence operation for a Middle East fund planning to make "a big, long-term bet on U.S. oil and gas."

The job would be to represent the fund and "make sure their investments are protected from any sort of risk that’s coming down the line," said the man, who went by Tom James and claimed to be a principal at the firm Harrington Rowe. Potential climate and environmental regulations were the fund’s top concerns, he said.

Is that "something that sounds vaguely interesting for you?" asked James, whose online biography listed experience working for the notorious British public relations firm Bell Pottinger and the United Kingdom’s Labour Party.

"Yes," Keith McCoy, one of Exxon Mobil Corp.’s top congressional lobbyists, said during a surreptitiously recorded Zoom call in May. "No, absolutely."

There was just one problem: It was all a setup.

James and Harrington Rowe appear to be the creation of Unearthed, an investigative project of Greenpeace UK. Over the past two days, the group has posted politically explosive portions of interviews it staged earlier this year with McCoy and Dan Easley, a former Exxon White House lobbyist who now runs federal affairs for the renewable power company Apex Clean Energy.

The revelations cast doubt on Exxon’s support for the carbon tax climate policy it claims to back and showed how the oil major had worked with the American Petroleum Institute to block regulation of a class of toxic firefighting chemicals it uses at some of its refineries (E&E Daily, July 2).

Meanwhile, Harrington Rowe’s website has gone dark, and the executive search firm’s profile has disappeared from LinkedIn. No one by the name of Tom James appears to work at Unearthed either.

A spokesman for Greenpeace UK provided E&E News with transcripts of the group’s interviews with McCoy and Easley but didn’t respond to a request for additional details on how it pulled off the elaborate sting. McCoy and Easley didn’t reply to interview requests.

But the lengthy transcripts provide some clues as to how they were duped.

The promise of Middle East oil money seems to have been a key concern for the energy lobbyists.

"What’s the salary?" Easley asked at the end of his 30-minute call. When he spoke to the unidentified activist, he had only been working at Apex for two months.

"Look, if it’s multiples of my current salary, I’m always happy to have a conversation," said Easley, who spent over a decade as a Democratic congressional staffer before going to work for Exxon.

The undercover activists also promised the lobbyists they could help shape the Middle East investment fund’s U.S. footprint. McCoy, for example, asked for more information about the fund’s oil and gas holdings and U.S. branding plans.

"Look, the strategy is up for grabs," the fake recruiter responded. "I don’t know exactly what they’ll decide in the end in terms of how to set that up legally. That’s way above my head, as you can appreciate, and I’m sure a lot of lawyers are working on all the questions there."

At that point, the activist shifted from answering questions to asking them. He and McCoy then talked for another hour and a half.

Key to McCoy’s pitch to the purported headhunter was the lobbyist’s experience using trade associations to deflect public outrage and congressional scrutiny away from Exxon.

"I spent 12 years at the National Association of Manufacturers, so I know associations," he said. On hot-button environmental issues, associations can "step in and have those conversations and answer those tough questions and be the, for lack of a better term, the whipping boy for some of these members of Congress."

In the end, the activist thanked McCoy for his time and promised to report back to the Middle East investors he claimed to be recruiting for.

"Some of the things that you’ve told me today will be really, really useful, about helping them understand the sort of things that are very important in terms of how current affairs teams in the U.S. all think, and how they work, and especially how they work in today’s climate — excuse the pun," he said.

"I enjoyed the conversation," McCoy responded. "This was fun."