Inside the final moments of loss and damage at COP 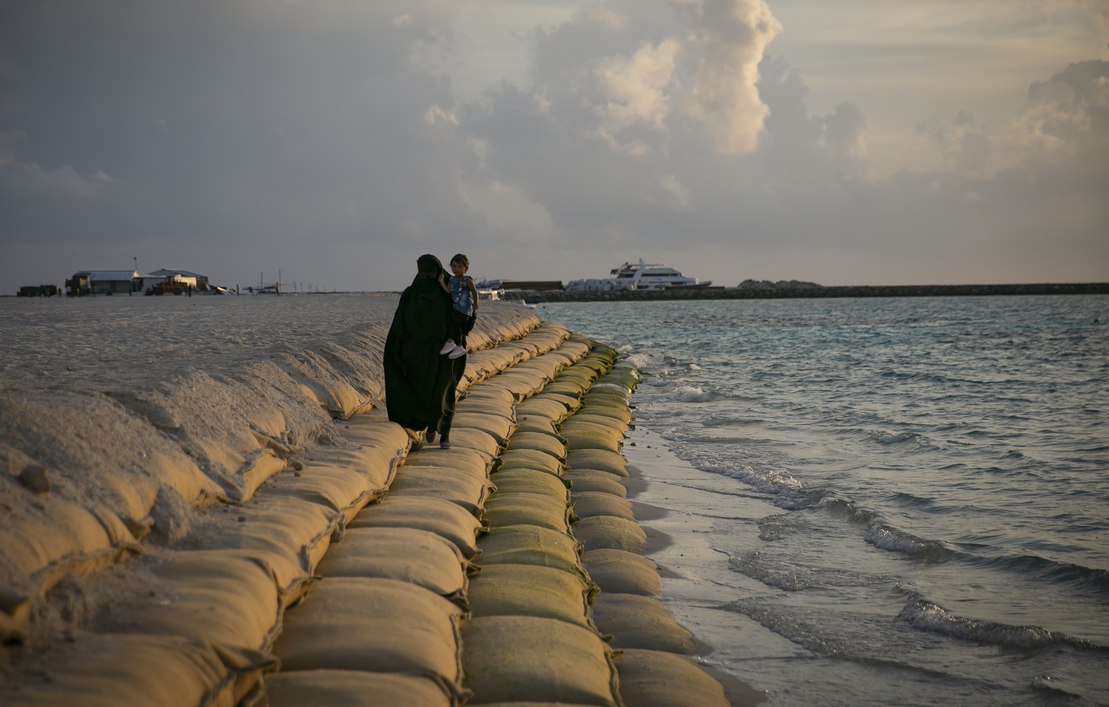 A woman walks on a wall of sandbags that is being used to prevent erosion in Guraidhoo, Maldives. The Maldives is one of the world's lowest-lying countries. Allison Joyce/Getty Images

Climate talks in Egypt were down to the wire when two words helped break the deadlock over a contested idea to create a fund for nations that are losing land and people to climate change.

The phrase — “particularly vulnerable” — came from a minister whose homeland is being consumed by the Indian Ocean.

The proposed wording, offered in a closed-door morning meeting as talks ground into overtime, led to an agreement on a new form of climate finance that would help countries “that are particularly vulnerable” to the ravages of climate change like extreme floods, hurricanes or rising seas — what’s known in U.N. parlance as loss and damage.

That agreement marked a turning point in a 30-year fight to get the world’s richest countries to offer financial support to developing countries facing climate catastrophe. And it satisfied a condition of wealthy nations, which will have to pay into the fund, by ensuring that compensation will flow to the neediest countries.

“I pressed for the inclusion of ‘particularly vulnerable’ countries because I strongly felt that it would be a disadvantage for us to not have that included,” Aminath Shauna, the Maldives’ environment minister, said in an interview.

The suggestion broke an impasse. Negotiators were haggling over a different phrase that would have sent climate aid from the new fund to the “most vulnerable” countries — a distinction that its opponents said would omit too many nations from receiving money.

The phrase “particularly vulnerable” doesn’t refer to a specific list of countries. It covers a range of geographies and economies, from small islands in the Pacific to the least developed countries in Africa. It doesn’t explicitly exclude other countries that the United Nations considers developing, like Saudi Arabia, but it does give a special distinction to nations facing the brunt of climate change with the fewest resources. The phrase is also familiar jargon in U.N. circles because it’s been used in other contexts. The words “most vulnerable” have not.

The delicate balance highlights how difficult it was to arrive at a global agreement on climate finance as time ticked down at the U.N. climate talks last month. Major players like the United States and the European Union were resistant to the idea until late in the conference known as COP 27 (Climatewire, Dec. 9). Developing countries had remained united and were determined not to leave the talks empty-handed.

Not a ‘cry wolf’ situation

Small islands have long sought to raise attention to the need for loss and damage financing — and not without reason.

All of the nearly 1,200 islands that make up the Maldives sit about a meter (3.3 feet) above sea level.

“We don’t see the kind of healthy reefs I used to see when I was growing up,” said Shauna, the 37-year-old minister. “So with sea level rise and with warming, it is going to destroy the very thing that we depend on for food, income and for protection.”

She recognizes that the Maldives and other small islands are not the only countries affected by climate disasters.

“But it’s very clear that the impacts of climate change are going to be far more devastating on the low-lying islands,” she said. And if projections are correct, in the next 50 years, the Maldives could cease to exist.

“So it’s not a ‘cry wolf’ situation,” Shauna added. “This is reality.”

She spoke in that final meeting in Egypt on behalf of 39 countries known as the Alliance of Small Island States (AOSIS), which argued that “particularly vulnerable” already appears in other U.N. climate treaties, including the Paris Agreement.

For the small islands, it was an effort to recognize their unique circumstance as countries on the frontlines of climate change but often ineligible for development aid because of their higher incomes. For other developing countries, the wording was ambiguous enough to allow them to argue that they face particular circumstances that increase their vulnerability.

Pakistan, for example, is not a small island state or a least-developed country, but after flooding displaced millions of people and cost the country billions of dollars in losses, it would be hard to argue that it isn’t eligible for loss and damage funding.

For a year leading up to the talks in Egypt, the Maldives had been working with other countries — both developed and developing — to find a narrative that was acceptable to everyone, said Shauna.

“For me, it was not acceptable that it should be just developing countries because that excludes the focus on the special circumstances of the small island states,” she said.

It was a “bit risky” to offer a suggestion so late in the negotiations, Shuana added. But negotiators agreed to her proposal.

The United Nations Framework Convention on Climate Change, the 1992 treaty that serves as the basis for annual climate talks, recognizes “small island countries, countries with low-lying coastal, arid and semiarid areas or areas liable to floods, drought and desertification, and developing countries with fragile mountainous ecosystems as particularly vulnerable to the adverse effects of climate change.”

The section of the Paris Agreement that pertains to climate finance highlights the need to consider the “priorities and needs of developing country parties, especially those that are particularly vulnerable to the adverse effects of climate change and have significant capacity constraints, such as the least developed countries and small island developing states.”

After years of hesitancy, the European Union came around to supporting a fund for loss and damage in the waning hours of the talks in Egypt, but its proposal limited support to only the “most vulnerable” countries, a narrower term that doesn’t appear in U.N. climate documents.

So “particularly vulnerable” was a landing ground.

Mohamed Nasr, the lead negotiator for Egypt, said the term as it appears in the Paris Agreement does not exclude any developing country or confine its application to small islands or less developed countries. That means small islands could be protected because they’re already specified as being vulnerable, but the broader language could be interpreted to pertain to all developing countries.

“The use of the language from the Paris Agreement gives flexibility and ambiguity to allow for a wider definition of particularity,” he said.

Many questions remain unanswered about the fund. Many of them will likely revolve around where the money will come from — rather than who benefits.

“That doesn’t matter if you’re looking at ‘particularly vulnerable,’ or ‘most vulnerable’ or all developing countries,” he added. “That’s a completely separate question about sources than about how you’re going to allocate those funds in a fair and equitable manner.”

There also needs to be more action on reducing the emissions that are driving loss and damage.

“For small island states it’s really important that we have access to finance that is equitable and accessible because we are now in [a] loss and damage era for us,” Shauna said. “But we don’t want that to happen to the entire world. We don’t want loss and damage to be the norm.”